Blog - Latest News
You are here: Home1 / Article Archive2 / I was there3 / Mission accomplished – getting the job done in a Cessna 150 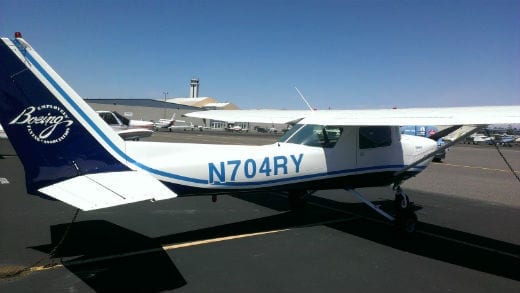 A couple years ago, I had the chance to fly in some amazing VFR conditions, while simultaneously helping my flying club out in the process. We were extraordinarily fortunate with the amazing flying weather we’d been getting during that late September and early October. Knowing that regular Pacific Northwest Autumn weather (read: mucho rain) was forecast for the following week, I went online to book a few hours in my club’s Cessna 150, N704RY, based out of Snohomish County/Paine Field (PAE). Doing what, I did not know. Perhaps I would go up to Concrete (3W5) in the North Cascades, something I’d been hoping to do for a while. Maybe I would just peruse the North Sound, or do some pattern work at PAE. Decisions, decisions…

Well, imagine my interest when I logged onto the club’s scheduling page and found a rather urgent request to pick up an engine cylinder from Avian Flight Services at Bremerton National (PWT) on the Olympic Peninsula for immediate delivery to our club’s mechanics at Renton Municipal (RNT) in order to be installed in our C182. Hmm, a mission…something I rarely got to do in my then five years as a certificated pilot.

Being a VFR pilot with (currently) little interest in pursuing an instrument rating, chances to perform a mission were a little difficult to come by, as completing said mission can oftentimes be waylaid for the obvious reasons (quickly turning weather, maintenance, aircraft unavailability… the list goes on). However, this day was an exception… aircraft ready, CAVU everywhere, no TFRs, and a reasonably simple mission. I was ready!

Lifting off from Runway 16 Right at PAE into the clear morning sky with light winds, I could not have been more excited. I did need to hold for the requisite three minutes for a departing Falcon Jet, but soon enough, Paine Tower issued my takeoff clearance. At cruise, power set and mixture leaned, I pointed the nose toward the Olympic Mountains and PWT. The air was so smooth, I needed only to tap the rudder for slight heading changes. Keeping an eye out for traffic, I sat back and enjoyed the ride.

Upon arriving at PWT, I walked into Avian. “The cylinder is ready to go,” I was told, “and so are the other two.”

A quick call to the club base revealed that we did indeed have two more cylinders on order, but they would check with the operations manager and give me a call back. So here I sat at PWT, with a still-mostly fully-fueled C150, and roughly 130 pounds of cylinders ready to head to Renton. Hmmm.

In the end, I figured out that weight-wise, I could make the flight with the boxes placed as close to the seatbacks as possible. However, without cargo netting to hold them down, I couldn’t be certain that my cargo wouldn’t slide backward on takeoff and put me well aft of CG limits (a thrilling possibility I had no desire to entertain). Our ops manager then called back and said that the other two cylinders were for stock, and if I could bring them, great, but they weren’t urgent. Decision made, I left the stock cylinders at Avian and departed for RNT.

Over the top of SEA offers a great view from the cockpit of a Cessna.

A quick call to Seattle Tower got me the Class Bravo transition over the south end of Sea-Tac, a favorite journey for me. Crossing SEA forces me to stay on my game, flying and communicating. The SEA controllers have never been anything but courteous and professional in all my dealings with them, and the least I can do is return the favor. The last thing they need is to wonder what the heck the 150 driver is doing.

After landing at RNT, I taxied over to the maintenance shop to deliver the cylinder. The Skylane sat there, open and forlorn, eager to return to the sky. Another club member was there and needed to get over to our home base on the other side of the runway, so I was more than happy to give him a quick ride over.

Mission completed, I departed RNT and returned to the clear, calm skies that beckoned me home. Climbing east of Lake Washington and Bellevue, I viewed the surrounding area, checked for traffic, monitored my gauges and pondered how lucky I was to be able to do what I do. In the span of two hours, I was able to take in the amazing local sights, talk to some excellent air traffic controllers, enjoy the serene and calm air of early autumn, and help my club get another of our planes ready to fly. All in all, not a bad way to end the flying season. Brandon Freeman
Brandon grew up always looking up, especially when a random airplane happened overhead. A Seattle-area native whose only complaint about the rain is the accompanying lack of VFR weather, Brandon earned his Private Pilot Certificate in late 2007 and has since added a seaplane rating, a tailwheel endorsement and hopes to soon add a glider rating. A self-admitted airplane junkie, he’ll find any reason to hang out at the airport, whether to fly or watch other aircraft come and go. He has flown C172s, a 7KCAB Citabria, and a Piper Super Cub on floats. Currently he flies his club’s C150 and C172s, and blessedly counts his wife as his favorite passenger.

On your own – airline flying in the South Pacific before GPS

Letter to myself as a young student pilot
Scroll to top