Blog - Latest News
You are here: Home1 / Article Archive2 / John's blog3 / Letter to myself as a young student pilot 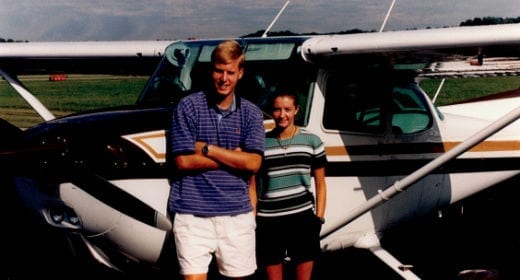 Lessons learned after 20 years of flying

I’m certainly not the world’s most experienced pilot and I’m not facing a terminal illness, so it may seem an odd time for reflections about the meaning of life and all that. But this summer I passed 20 years as an active pilot, and that got me thinking: what do I know now that I wish I knew when I started flying? What parts of being a pilot have been better than expected, and what parts have been worse? Here’s what I would say to my 10th grade self, about to embark on a life in aviation.

So you’re taking a flying lesson tomorrow. Congrats. You’ll have a blast (yes, the instructor really will let you fly the airplane), but you may be surprised how much this flying thing will change your life. While you’re mostly focused on making the varsity football team right now, the rest of your life will have a lot more to do with airplanes than sports.

It’s not a straight path, but that first hour in the logbook will lead to many more.

With that in mind, here’s some free advice from someone who knows a little about the journey ahead.

Earning your private pilot license will be harder than you think. You’re smart and hard-working, so you assume earning a pilot’s license can be knocked out like a history paper. It can’t. It will take two years of training, lots of canceled lessons (does anyone fly in winter in Cincinnati?), plenty of frustration and even a few moments when you question whether you can do it. Don’t worry – this is typical and you can do it.

It’s totally worth it. After that pep talk, why even start on this road? Because it is worth every bit of effort you put into it. “Nothing ventured, nothing gained” applies to many things in life, including flying. Being a pilot will give you a new outlook on life and a new appreciation for the people you meet in it. More than just a hobby, it will become a lifestyle for you, an identity. Here’s one shocking example: you’re going to spend a lot less time partying in college and a lot more time at the airport.

Slow down on your first solo and enjoy the moment. The weather won’t cooperate for that solo on your 16th birthday, but the big day will come soon enough. You won’t feel ready for it, but nobody ever does. And while some people describe it as thrilling, surreal is probably a better description. Try to step back for a second and take in the scene. After you land, don’t be so anxious to rush on to the next milestone – this is a red letter day, and you’ll be surprised how little you remember.

Her mom will let you take her for an airplane ride your senior year in high school. Do it.

Take that cute girl you just met for an airplane ride. She seems like a keeper because she is. Twenty years and two kids later, you’ll fully appreciate what a great co-pilot she is – both in flying and life. Some of your best memories as a family will involve airplanes and half-baked flying ideas you came up with. Having a partner who appreciates general aviation adventures is critical to future happiness for a pilot. You found one.

Don’t be afraid to say “I don’t know.” Especially early on, this will be hard to do, since you want to fit in with the old pros. But there’s so much to learn, and a little humility will go a long way. Some of those old pros have a lot to share, if only you’ll listen to them.

Your instrument instructor will be a bear. Suck it up. Earning your instrument rating will be harder than your Private license, partly because it’s a tough rating and partly because your CFII will push you like a drill sergeant. No, it’s not going to be particularly fun, but instrument flying is deadly serious and his focus on precise flying will pay off. You’ll learn more in two months than most pilots learn in two years. Rise to the challenge.

Embrace pre-flight planning as part of the fun, not just a chore. It’s popular advice these days to “buy experiences, not things,” because an experience can be enjoyed in both the preparation and the doing – it’s lasting. The same goes for flying; it’s not all about the time you spend in the left seat. When you fly to Oshkosh, don’t just check the box; enjoy the whole process of packing your gear, choosing a route and watching the weather. It’s all part of being a pilot.

You’ll think you’re a great pilot. Then you’ll fly a tailwheel airplane. You passed your Private checkride, you survived your instrument instructor and you even got a high performance/complex checkout. You may think you’ve got it all figured out. Then you’ll go for your tailwheel endorsement and come back down to reality. There is always more to learn in aviation, and you never have it all figured out. And here’s a tip for your Cessna-trained feet: those metal things on the floor are called rudder pedals. Use them!

Actual fuel burn matters a lot more than the POH numbers. It doesn’t matter how long you stare at the performance charts, those numbers are not guarantees. One night flying home from Rome, Georgia, in a Cessna 210 will prove it forever. Admit defeat, land short when those fuel gauges start to scare you and never make that mistake again. One hour in the tanks at all times – it’s an absolute minimum.

Just because it’s legal, doesn’t mean it’s safe. You know this, but you’ll have to see it in person to fully understand it. 1000 foot ceilings and 5 mile visibility in light rain may be legal VFR conditions, but you probably shouldn’t do it. That scud-running trip through Kentucky will bring you face to face with the line between safe and legal. Stop before you cross it. Mother Nature doesn’t care how badly you want to get there.

Instrument flying will be the most demanding thing you ever do. That day you fly a Pilatus to New York in bad weather, deviate around storms, break out at minimums and land in a 25 knot crosswind? It will be one of the most engrossing experiences of your life, when your brain is moving at full speed and nothing outside the cockpit of that airplane exists. It’s like a treadmill set on max, and the only way to keep from getting hurt is to keep moving. Because of that challenge, real instrument flying will offer a high no drug could ever match. You’ll practically skip off the airplane that day.

Being a pilot will help with those two little ones.

Flying will make you a better father. Sounds crazy, I know, but it’s true (oh yeah, you’re having girls). Flying will teach you supreme patience, the ability to improvise and a knack for staying calm under pressure. These are all valuable traits for raising kids, too. When something goes wrong at Disney World in 2014, just treat it like a minor emergency in the cockpit: identify, verify, feather.

Everybody is faking it. When will you be a “real pilot?” Never. At 15, you assume there’s some light switch moment when people go from kid to adult, or from anxious expecting mother to wise parent. But life doesn’t work that way, and neither does aviation. There is no sudden upgrade to expert, no morning you wake up with all the answers. Instead, you just age into experience. When you pass 1000 hours and still feel like you have so much to learn, it’s because you do. But relax – the guy who just passed 10,000 hours feels the same way.

So have fun, work hard and try to tuck away a few memories along the way. It’s a wild ride but the ups will far outnumber the downs. And as your grandmother often says, “Keep your airspeed up.”

Mission accomplished – getting the job done in a Cessna 150