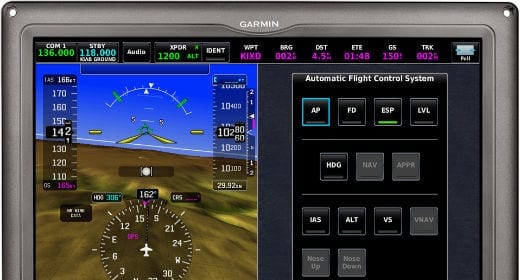 Piper recently announced an upgraded version of their Meridian turboprop, and one of the most important features is something that was previously found only on airliners. The Piper’s airplane new Electronic Stability and Protection system is a high tech pilot in the background that uses the autopilot servos to prevent excessive airspeed, stalls and unusual attitudes. As Garmin says:

ESP™ functions independently of the aircraft’s autopilot system (although it uses the same control servos), so it basically operates “in the background” whenever the pilot is hand-flying the airplane – gently nudging the controls back towards stable flight whenever pitch, roll or high-speed deviations exceed the recommended limits. ESP will then disengage when the aircraft returns to its normal flight regime.

The Meridian is not the only airplane with this technology. ESP has been available since 2010, and is available on the Cirrus SR22, the King Air 200 and even experimental airplanes with the G3X glass cockpit. While quite rare on older airplanes, it’s a safe bet that ESP systems will only become more common as time goes on.

The question is, does this new technology improve safety?

Proponents say unequivocally yes. Loss of control is still a leading cause of fatal accidents, and ESP can directly prevent a lot of these. If you’re getting slow on final, the system will gently push the nose forward just enough to prevent a stall. The same goes for overspeed or overbank situations. Crucially, because ESP is always on, the pilot doesn’t have to remember to turn it on in an emergency – it’s always working.

Not everyone is convinced, though. Many pilots caution that aviation has a long history of new technologies that promise to improve safety, but fail. The latest string of airline crashes prove that fly-by-wire, autothrottles and all the latest gadgets can’t make up for poor airmanship.

What do you think? Will these types of passive safety systems improve general aviation safety or not? Add a comment below.

Why off-field landing #61 was different from the other 60

The most important person at your airport
Scroll to top