Blog - Latest News
You are here: Home1 / Article Archive2 / I was there3 / Destination flying – Outer Banks of North Carolina

Even if you have never heard of the Outer Banks of North Carolina, it’s very likely that the town of Kitty Hawk will ring a bell. This location is where brothers Orville and Wilbur Wright made the first controlled airplane flight from the top of a sand dune 100 years ago. Kitty Hawk is part of the Outer Banks, often called by the abbreviated name OBX. This thin strip of land juts out from the northeastern coastline of North Carolina. The OBX is an oversized sandbar, technically referred to as a barrier island. The combination of ocean, sound waters and sandy coastline make this a spectacular region to navigate by air. There are several small airports scattered throughout the area. If you’re considering a destination flight, be sure to include the Outer Banks.

Where it all began…

I own a Sportcruiser, fly over this area frequently and find the coast easy to navigate. Those unfamiliar with the area can follow the sandbar: Currituck and Albemarle Sounds to the west, Atlantic Ocean to the east, with the land in between measuring about a mile wide in most areas. Viewing the abundant wildlife will be a definite highlight during your flight. I often see whales, sea turtles, sharks and school of fish in the Atlantic. This region is a sportsman’s paradise and you will come to understand the reasons when you see the enormous flocks of waterfowl and other wildlife living along the sound waters and marshlands.

The two largest airports in the area are Currituck (KONX) and Dare County (KMQI). Both are non-towered, yet big enough to accommodate business jets. I’ve seen a variety of planes at our local airports, everything from a Cessna 150 to a Gulfstream GIV. Be prepared for southern hospitality when you step foot inside the FBOs. The pace of life here is likely slower than what you’re used to, and the people are super friendly. Both airports offer fuel at reasonable prices. In fact, many people from Virginia fly to Currituck just to take advantage of the low fuel cost. It’s likely you’ll see skydivers at Dare County and gliders being towed at Currituck. These airports offer tie downs, but there are no hangars for transient pilots.

First Flight Airport is right next to the Wright Brothers National Memorial – a must visit.

The scenic airports in the Outer Banks are the real draw for pilots. First Flight airport (KFFA) is the most iconic, I consider it a “must stop” because it’s located adjacent to the Wright Brothers National Memorial. CAUTION – this airport is nicknamed “First Fright” because it has a relatively small runway and wind factor is often high. Tie downs are provided, you may only stay for 24 hours and car rental service is available.

Further south is the Billy Mitchell Airport (KHSE), located in the town of Frisco. It is owned by the National Park Service, and tie downs are available. Be sure to fly over Cape Point, which is a fisherman’s paradise. At this junction, the Outer Banks quits running north to south, and turns towards the west. On the map it sticks out like a sore thumb. You can also cruise above the historic Cape Hatteras Lighthouse that sports a dominant black and white diagonal pattern, making it easy to spot. These areas are a part of the National Park Service, so be sure to fly above 2,000 feet.

As you continue southwest, you will come to Ocracoke Island Airport (W95), also owned by the National Park Service. This is my favorite airport for several reasons, starting with the fact that Ocracoke is a uniquely alluring coastal island. Unless you are a pilot, Ocracoke is only accessible by ferry which has allowed the island to retain the charm of a bygone era. The runway runs parallel to the beach, so takeoffs and landings are very enjoyable, and tie downs are available. The village is walkable distance from the airport, and golf carts are the preferred method of transportation on the island. Howard’s Pub, an iconic local restaurant, will pick you up from the airport in their 6-seater golf cart. To coordinate a pick-up, just call on 122.9 as you are preparing to land. Undeveloped beaches are less than a five-minute walk from the airport, and there’s a lifeguard on duty during the summer months. My personal recommendation is to rent a golf cart and spend the day exploring the island.

There are few things you’ll want to note before flying in this area. Previewing the chart, you will see most of the Outer Banks is in a Military Operations Area (MOA), and there are a few restricted areas you’ll want to avoid. The Coast Guard pilots are good about stating their location on the “beach traffic” channel 122.9, but the same can’t be said for the Navy fighter jets and helicopters. I see them often, but they’ve never been a safety issue for me. In addition, you may come across the Federal Wildlife Officer traveling in a Kodiak floatplane. In Corolla, NC, there is an airport called Pine Island that looks inviting, but note that it’s off limits unless you are an owner or owner’s guest. One last word of caution: watch out for kites if you’re flying low over the beach. Our brisk winds make this a kite flying haven, and I’ve had a few close calls that remind me to be watchful.

If you are searching for a family-friendly adventure, bring your spouse and kids on this trip. The Outer Banks is consistently named a top family-friendly vacation destination. The summer season is particularly busy and our spring and fall shoulder seasons are increasing in popularity due to the mild weather and ongoing festivals and activities.

A wide variety of homes are available for weekly rentals, everything ranging from two-bedroom cottages to 22-bedroom estates designed for reunions and events. There is a broad selection of hotels, inns and B&Bs available for overnight and weekend stays. But, the main reason people typically visit the Outer Banks for is our 200 miles of award-winning beaches that have retained their unspoiled connection to nature and are some of the highest rated in the world. With a central East Coast location, we may be closer than you realize. Look us up on the map and plan a visit to explore our beautiful natural landscape, historic venues, outdoor recreation, water sports, fresh seafood and unforgettable southern hospitality! 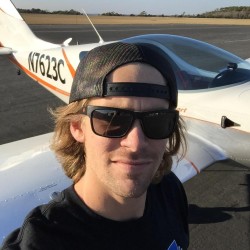 Ryan Thibodeau
Ryan Thibodeau is a 200 hour sport pilot currently working on his PPC. A lover of the outdoors, he calls the Outer Banks of North Carolina his hometown. His passion for motocross racing was one major reason he became a pilot, as the two share a lot in common. He plans to jump right into IFR training after his private pilot check ride with the hopes of one day owning a Bonanza A36. Ryan is a regular contributor to the Carolina Designs Blog , and writes about all types of recreation in North Carolina’s Outer Banks.

Ice on the wings – would you tell the pilot?
Scroll to top