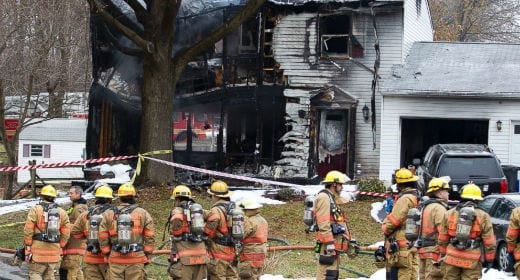 Bad things that happen close to home do get your attention, especially when they relate to your chosen field.

A Phenom 100 light jet, flown single-pilot by its owner, a physician and businessman, crashed into three houses when on final approach to runway 14 at Montgomery County Airpark in Maryland at 10:42 a.m. on Monday, December 8.

The three people in the jet died. In what was the worst possible outcome on the ground, a mother and her two young sons, one an infant, died in their home. As the jet broke apart on impact, a wing of the jet apparently went into their house and exploded in a huge fireball.

A terrible tragedy, and a PR disaster for aviation.

There was cellphone video of the scene taken just moments later and there was evidence aplenty of heroic moves by onlookers. People in the neighborhood knew that the mother and two children were likely at home and tried to get into the burning structure but were repelled by the flames. The same thing happened to first responders who actually got into part of the house but couldn’t reach the victims.

When I watched the 4:30 a.m. news on the Thursday after the accident, it was still the lead local story. In a huge outpouring, folks had to that point donated $370,000 to a fund to help the surviving father who was at work, and child, who was at school, begin to recover from the tragedy. The news I watch comes from D.C., the breaking news capital of the world, and it is rare for a local story to be the lead for four days and counting. It was still going strong on Friday.

That this is a PR disaster for general aviation and for that airport is an understatement. It would be hard to think of anything more tragic.

As I watched the coverage I developed a high degree of respect and admiration for Robert Sumwalt, the NTSB member on the scene. He was there quickly because his office is right down the road and by Tuesday afternoon he had released enough hard information to quiet the instant “experts” the TV folks usually produce after an accident. I hope the NTSB will continue to release recorder information as soon as it is available.

In little more than 24 hours virtually all but one thing had been eliminated as a cause for the accident: the pilot.

Much was made in the local media of the fact that in 2010 the same pilot, from North Carolina but with business and professional interests in this area, had crashed a TBM 700 during a landing attempt at Montgomery County Airpark. He was not hurt but from the pictures the airplane looked like it was totaled. The engine was torn off and the wings were mashed up. It had gotten away from him on a go-around and came to rest in some woods off to one side of the runway.

NTSB board member Robert Sumwalt has tried to quiet the TV speculation by releasing details as they are discovered.

The pilot was type-rated in the Phenom 100 (actually an Embraer EMB-500 by type designation), had an ATP and was reported to have 4,500 hours flying time. None of that means much when an airplane is stalled on final approach.

Of late, there have been a number of crashes where airplanes went into houses. Just a few weeks ago there was a picture on a news site of the tail of an Aero Commander sticking up out of a house near Chicago.

Over the years, too, there have been a number of accidents like this. It hasn’t been long since a Twin Commander took out a house in Connecticut while on a circling approach. A 737 took out houses near Midway many years ago, an Airbus went into a residential area in Queens not long after 9/11, A DC-8 wound up in the streets of Brooklyn after a midair a long time ago, and, in ancient history there is the runway at Newark that was closed because a C-46 crashed into Elizabeth, New Jersey, while on final to that runway.

The point being that busy airports are usually in urban areas where there is a good chance of a house or building being involved in any off-airport crash.

A friend of mine, Jim Richardson, and his father built Montgomery County Airpark in the 1950s. I started using the airport quite a bit in the 1960s and remember it then being out in the boonies. Where it was a rural area then, the northwestward sprawl from D. C. has made it into an urban area. All the houses in the area were built after the airport but that is true in a lot of places and in the public eye it is no longer considered a viable defense for an airport

The public wants the powers-that-be to do something to prevent future accidents like this. I saw utterances about examining flight paths and things like that but the simple fact is that airplanes are going to fly over houses to land at that and every other urban area airport in the country. The only real solution would be to close all the airports but that would be akin to closing all the highways to cut down on traffic fatalities caused by “the other guy.”

In the case of airplanes and houses, “the other guy” is us. Where it is perfectly fine with the public for us to take all the risks we want to take with our own skin, folks look askance at us when we expose them to risks. It is hard to convince a stay-at-home mom that there is some reward to her from the risk of a jet airplane flying overhead. I was going to add “slight as it may be” but, in this case, that doesn’t work.

As a practical matter the only thing that can be done to address this is in the left front seat of the airplane.

One thing that came strongly to my mind after this is what the thinking might have been of the insurance underwriter who covered this person to fly single-pilot in a jet. His accident in the TBM would have been enough to make me nix him in a jet. But there have been a lot of cases recently where a pilot was turned loose in more airplane than he could safely fly. That needs a close look.

Certificates and ratings are convenient to hide behind but an ATP in the billfold of a doctor or lawyer does not mean the same thing as one carried by an airline or corporate pilot. Neither does the best training in the world. Completion of the training means that you met the standards on one day. Is the mindset there to maintain those standards every day after that until more training is required? There is a good reason pilot and certification standards are higher for jets. The stakes are higher and the flying more demanding. The manufacturers can’t fudge on the certification of the airplanes but pilots can usually buy enough training to get the type rating even if they are marginal.

An accident like this does cast a shadow on the single-pilot operation of a jet by the owner. I think that anyone who can afford a jet can also afford a copilot but it is easy to shoot down the argument that another pilot would have prevented this accident.

Should autothrottles be required for single pilot jets?

When all is said and done it might just come down to the fact that the pilot failed to increase the power when the airspeed started to decay. Three other accidents immediately came to mind in which this happened but with two (or more) pilots in the cockpit. I remember a TBM-700 and a Citation where the power was not advanced until too late when the airspeed dropped to a dangerous value, and then there was the 777 at SFO that crashed for the same reason.

In other words, if one pilot can forget to shove the power levers forward, two pilots can do the same thing.

Autothrottles, where you select a desired airspeed and the autopilot system maintains that airspeed are a hardware item that addresses this. (The 777 at SFO had this but it had been disabled by the crew). These systems are not infallible. An altimeter problem fooled an autothrottle system on a 737 in Europe, the crew didn’t notice, and a crash resulted. For the most part, though, they have been good.

If I were King of insurance underwriters or head-honcho at FAA I would not approve any jet for single-pilot operation unless it had autothrottles. That would not make as great a contribution to safety as that found with mandatory ground prox equipment but it sure could help.

This was an event that I heard a lot about because it was close to home. It was also an event that the public will not quickly forget. We have to live and deal with that in an objective and constructive manner.

Where is your checklist? Make your own
Scroll to top