Blog - Latest News
You are here: Home1 / Article Archive2 / John's blog3 / Flying is not an extreme sport – time to get serious about safet... 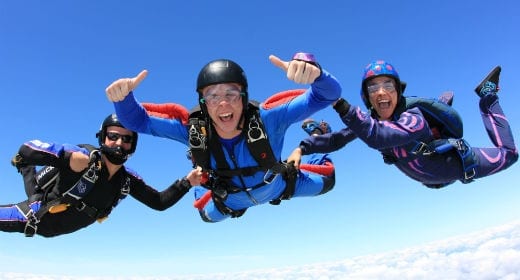 Completely by chance, I talked to three people in the past week who have given up on the dream of flying. All of them have a real passion for aviation, but walked away for the same reason: lack of family support. Two wanted to begin flight training (and had the money set aside) but didn’t because their spouses were dead set against it. The other was an active pilot but stopped flying because his wife didn’t want to fly with him anymore and it just wasn’t fun without her. All three spouses cited safety as their main concern.

What spouses think of when they hear “private pilot?”

Just a few hours after talking to the third dropout, I was enjoying some hangar flying with a long-time pilot when I heard those dangerous words: “what aviation really needs is…” The brilliant idea this time was for general aviation to take a page out of extreme sports – sell flying as the next best thing to the X Games. This pilot believed that, in order to appeal to the next generation of pilots, we need to make aviation look thrilling and daring.

The juxtaposition was startling. Many spouses wish flying was a lot less exciting, not more. Are we our own worst enemy?

Sometimes it seems like it. Pilots have a long history of stumbling through the safety conversation that inevitably comes up with non-pilots. You may have even repeated the old saw about “the most dangerous part is the drive to the airport.” That’s false, but it’s worse than that. Glib answers that dodge the question miss a prime opportunity to talk honestly about aviation safety – right at the moment when a nervous passenger is open to a little education.

And let’s be honest – whatever our current tactics are, they are not working. While hardly anyone today thinks twice about hopping on a Boeing to go from New York to LA, going around the pattern in a “small prop plane” is positively terrifying to many people. I know one spouse who has nicknamed her husband’s small airplane the DT – for death trap. Accidents like the recent Phenom crash in Maryland, and the front page stories they create, do not help our reputation either.

There’s a tendency for pilots to be dismissive of the safety question. After all, we’ve answered any doubts about flying safety or we wouldn’t be pilots. We are also in control of the flight, so we hold significant advantages in terms of knowledge and experience. But history shows that downplaying safety concerns – even if they’re irrational – is short-sighted.

The airlines got serious about safety decades ago, and have since posted an unbelievably good accident record. Perhaps not coincidentally, airline travel has boomed over this period. Lower air fares help, but they haven’t declined as much as you might think. In any case, $49 air fares don’t do much good if passengers are too afraid to fly.

Likewise, business aviation’s safety record has improved and this segment is now one of the few bright spots in the general aviation activity reports. Perhaps as important as the actual record, business aviation operators are talking about and measuring safety more than ever: charter brokers search for safety-audited operators, flight departments are instituting formal safety programs and regular simulator training is more common than ever. As a charter customer, you’re sure to hear about safety early and often.

Cirrus has tackled the safety issue, and these pictures are less common lately.

In the piston airplane world, Cirrus has tackled the safety issue head-on. You can disagree with their tactics or their marketing (and plenty of pilots like to), but they have been serious about discussing safety and working to improve it through both design and training. The topic comes up throughout their sales pitch, and many Cirrus owners’ spouses are very well-read with respect to aviation safety, even if they aren’t pilots. Recent accident trends in the Cirrus fleet, if they continue, suggest real improvement may finally be here. Yet again, this safety focus seems to be paying off in the sales numbers – while Cirrus’ sales are hardly at 1970s levels, they are far better than most general aviation manufacturers.

I’m not suggesting we scare passengers with all the safety talk, but we can’t ignore the subject any longer, if for no other reason than we have a great story to tell. The story is that flying is as safe as you want to make it. But talk to most non-pilots and you quickly find out they are worried about the wrong things: engine failures and catastrophic mechanical problems. An honest look at the statistics quickly proves that such accidents are rare, and when they do happen they are not necessarily fatal. A spouse simply should not spend every flight worried that the wing might fall off.

The next step in the safety conversation is to point out that, while small airplanes are not death traps, the pilot in command determines how safe each flight is. Whether it’s great training, personal minimums or just having the guts to cancel a trip, we can make flying safer by making better decisions. The exciting part here, at least for many non-pilots, is that they can play an important role – and removing that feeling of powerlessness is a helpful part of conquering fear. By understanding some of the decision-making process, a spouse can be supportive of no-go decisions when they know the pilot is feeling pressured or they can encourage the spending of extra money on proficiency training. This helps everyone involved.

None of this is a miracle cure for general aviation, but it doesn’t get the attention it deserves. We complain loudly about the cost of flying – and it is expensive. We complain about the complexity of flying and the FAA’s regulations – and they are too complicated. But the topic that comes up most often when I talk to prospective pilots is safety. An active pilot needs the full support of his family and friends, and convincing them that this expensive and time-consuming activity is safe shouldn’t be an afterthought. Let’s meet the question head-on and get serious about safety talk.

In other words: pilots are boring. Embrace it!

My tailwheel transition story, so far