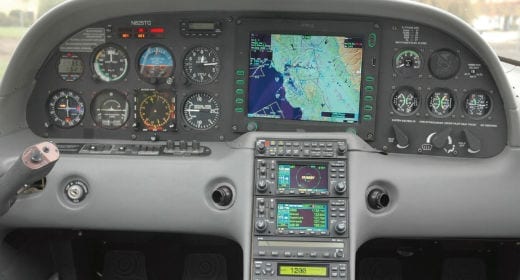 It sounds so simple: full power, pitch up and climb. What could possibly go wrong on takeoff, assuming the engine keeps running? The truth is, an awful lot, as a Cirrus accident from 2013 makes clear. We are at our most vulnerable just after takeoff, with little altitude or airspeed but lots to do in the cockpit. Throw in bad weather or dark skies and things can get overwhelming in a hurry.

On the day of this crash, the pilot and his 7-year old daughter were departing Spirit of St. Louis Airport (SUS) for Winslow, Arizona, with a fuel stop planned in Dalhart, Texas. The Cirrus took off on runway 26R, but as the NTSB report makes clear, the airplane didn’t make it far:

The Cirrus crashed into wooded terrain just a few miles off the end of the runway.

Further NTSB analysis showed that the engine was running, the controls were operating normally and the instruments were functional. While the airplane’s parachute had deployed, it was most likely due to post-crash fire, as the canopy was unopened. In other words, this sounds like a classic Controlled Flight Into Terrain (CFIT) accident, where the pilot flies a perfectly good airplane into the ground. Or, as the NTSB put it: “The pilot’s failure to establish and maintain a positive climb rate during the initial climb in night instrument meteorological conditions.”

The natural question in a CFIT accident is: how could this happen?

The weather was lousy, that’s for sure. The official METAR at the time of the crash reported a 400 ft. ceiling and 3 miles visibility with mist, and a SPECI just a few minutes after the crash reported visibility of less than 2 miles in mist. A witness reported “very foggy” conditions, and only seeing the airplane’s navigation lights for a few seconds as it flew past. But while the weather was bad, it certainly wasn’t unflyable–ceilings and visibilities were above the minimums for the ILS approach back into SUS.

The airplane, a 2001 model Cirrus, seems to have been operating normally. It was a very early SR22, so while many pilots think full glass cockpit when they hear “Cirrus,” this airplane came before the full Avidyne system was available. The primary flight instruments were mechanical, and the early model multi-function display (MFD) in the middle of the panel had recently been replaced by a newer EX5000. It’s not clear if the airplane had a full Terrain Awareness and Warning System (TAWS) or a flight director, but these were not standard on SR22s until a few years later, so it’s unlikely. The airplane was certainly well-equipped, with dual Garmin navigators and an autopilot, but the airlines haven proven that modern TAWS systems can virtually eliminate CFIT accidents.

That leaves, as usual, the human in the left seat. The 41-year old private pilot wasn’t brand new, but neither was he an old pro. Records indicate he had approximately 475 hours total time, with just over 150 hours in the Cirrus and a 6-month old instrument rating. This range of experience is often described as a dangerous time in the life of a pilot: when he leaves some of his beginner’s caution behind in pursuit of more demanding trips, but perhaps before he has accumulated enough experience to recognize when to stay on the ground. Many veteran pilots can remember making flights during the 400-1000 hour range that look less than safe with the benefit of hindsight.

A representative panel of an early SR22.

Taking off before 5am may have been the final straw. The pilot called Flight Service at 3:21am, so he was up very early. It’s possible he had a full night’s sleep, but it seems unlikely. At the very least, his natural body rhythms would have been off a bit. The NTSB report also mentions that the pilot had traces of cold medicine in his body, but it’s always difficult to determine how much of a factor this is.

One thing is certain: the early hour exacerbated the poor weather conditions. It was well before sunrise when the pilot called for his clearance, and SUS is located right in the bend of a river, making for dark and featureless terrain with few visual references when departing to the west. After rotating, the pilot would have been on instruments immediately, with a black hole below and gray scud above. Anyone who has been in this situation can describe how overwhelming it can feel–a safe climb takes total concentration and focus. In fact, TAWS systems have a “don’t sink” callout for exactly these scenarios.

In short, the pilot was taking on a huge challenge: departing very early in the morning, in poor weather, single pilot, with relatively low time. The airplane could handle the weather and the pilot was properly certificated for the flight, but that does not mean it was easy or safe. Richard Collins has famously said that single pilot IFR is all about flying with margins; this scenario had almost none.

Would a big, bright PFD with a flight director or a TAWS system have saved this pilot? They certainly could have helped. Pulling the airplane up into the V-bar and watching the red terrain fade away is reassuring, especially during those first few seconds after takeoff. But the basics are the same regardless of equipment: we must establish a positive rate of climb after takeoff and trust the instruments in front of us. It’s all that matters.

I knew they were going to die that day