Blog - Latest News
You are here: Home1 / Article Archive2 / I was there3 / Flight to the Repose 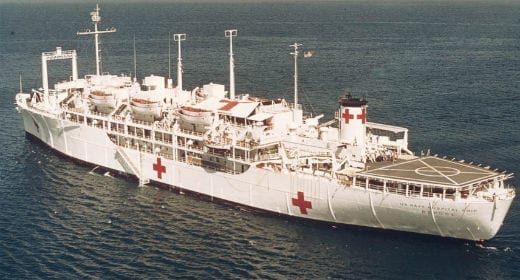 Quite simply we were there for them. We flew them to battle, resupplied ammunition and rations, rescued them when they couldn’t fight their way out, evacuated their casualties, and did everything we could to further their survival.

The CH-46 was a workhorse of the Vietnam war.

That night in the spring of 1967 our mission was to transport  about 15 wounded marines from the Phu Bai marine base, nine miles southeast of Hue on Vietnam’s coastal plain, to the hospital ship USS Repose about 15 miles off the coast in the South China Sea. The Repose was a World War II-era converted merchant steamer. It was mothballed after the war, then reactivated and refurbished for the Korean War with a small helipad added on its stern, then mothballed again. Twelve years later it went to sea once more for the Vietnam war.

I had flown wounded marines to the Repose several times during daylight, but this was my first night mission to the ship. Nothing special for a marine helicopter pilot flying off ships day and night. My helicopter was the second in a flight of two assigned the mission. Out on the tarmac corpsmen approached with the wounded, four to a stretcher. Some held IV bottles above the wounded as they came up the helicopter’s aft ramp into the passenger cabin’s dim red lights. Stretchers were fastened to hanging straps, stacked three high on both sides of the CH-46’s cabin.

With the wounded on board, we lifted off, climbing east over the coastal plain to the South China Sea. I trailed off to the left about 150 feet behind the lead helicopter guiding on its dim, green formation lights and flashing red anti-collision light atop its fuselage. The lower anti-collision lights were off to preclude pot shots from Viet Cong who might be peering up at the sound of our passing flight.

The few scattered lights of Vietnam’s simple coastal villages passed below then we crossed the coast into the darkness of the South China Sea. The Repose was still out of sight over the horizon. Her deck lights would soon appear ahead as dimly twinkling white specks in the darkness. Nothing to do now but complete the shipboard landing checklist, setting the brakes and locking the nose wheel so we wouldn’t roll or swivel about on the ship’s gently heaving and rolling helipad. I advised the crew chief and gunner over the interphone that we’d be landing soon and told them to pass the word to the corpsmen who tended the wounded in the cabin’s dim red night lights.

The destination: a small helipad on the back of the Repose.

Then the Repose radioed troubling news that electrical power had been lost to parts of the ship including the helipad edge lights. Edge lights provide visual perspective to gauge descent angle and closure rate. Without them, pilots must rely on the helicopter’s nose search light, controllable through a toggle thumb switch. Having landed on the Repose in daylight, I knew how close the smoke stack and superstructure were to our forward rotor blades. Not knowing the searchlight’s illumination field on the approach was the concern. Would it be enough to see what we needed to see?

Undershooting the deck would shatter the fuselage and we would drop into the sea. Approaching too fast or high risked striking the ship’s smoke stack or other superstructure. Ditching at night magnifies escape challenges. Pilots can jettison cockpit windows to escape. In the passenger cabin, it’s much more difficult to find an open hatch in the dark. The wounded strapped on stretchers would surely drown.

It was a dilemma different from enemy fire, a risk that went with the job where we weighed the odds, took our chances and accepted the consequences which sometimes were dire. On one mission a marine was killed in our helicopter approaching a landing zone. Another time I was wounded attempting to extract a surrounded marine patrol. On a third mission two Navy corpsmen were killed carrying the wounded into our helicopter perched on a hilltop near Khe Sanh. This was similarly dicey yet it simply came down to weighing the unknowns of search light illumination.

I radioed the flight leader that the risks were too high for a safe landing. He answered that he’d “give it a try.” I circled above watching his flashing red anticollision light and narrow, white searchlight beam stabbing ahead into the sea as it moved slowly toward the Repose’s few deck lights. Then the lights stopped and the helicopter’s searchlight reflected off the ship’s gray helipad. His medevacs were aboard.

He spiraled up and we returned to Phu Bai airfield where corpsmen offloaded our stretchers. I had no idea how badly wounded my Marines were. Tomorrow, in daylight, some or all would make it out to the ship.

The emergency procedure nobody practices

8 engines, coming at us
Scroll to top