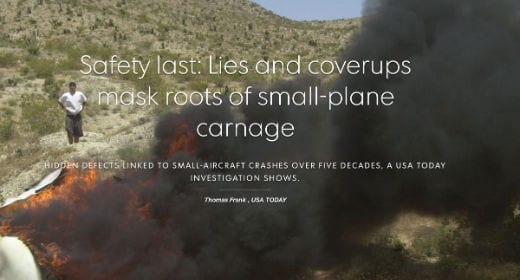 The headline is so over the top that it looks like a parody. The front page of the USA Today screams “Safety last: lies and coverups mask roots of small-plane carnage.” Words like lies and carnage are a dead giveaway that the article to follow will be a hatchet job, not serious journalism, and Thomas Frank’s three-part “investigation” doesn’t disappoint.

It doesn’t get much more sensationalist than this.

USA Today isn’t known for its high standards, but even for them “Safety last” is a disgrace. Over the course of thousands of breathless words, Frank manages to hit the trifecta of shoddy reporting: he cherry picks statistics, focuses on emotional stories over hard facts and relentlessly quotes from only one side of the argument. AOPA, GAMA and airframe manufacturers all talked to the author, but their contributions are nowhere to be found. It’s a classic case of a biased author who won’t let the facts get in the way of a good story.

The main argument is twofold: that small airplanes are crashing at an alarming rate, and that the NTSB has colluded with industry to hide evidence of major defects. Both are so wrong that the article contradicts itself numerous times.

The first point is supported by a grab bag of statistics, none offered in context or with any detail. Frank begins with a supposedly shocking statistic: “Nearly 45,000 people have been killed over the past five decades in private planes and helicopters.” That equates to three airplane crashes every day, which is certainly tragic, but it’s hardly “carnage.” For comparison, 14,800 car crashes happen every day, yet those don’t seem to merit a glossy, three-part story.

Even more damning, we are told, the general aviation accident record is worse than the airline accident record. This is lazy, and a classic straw man argument – no private pilot is flying a twin turbofan airplane with two professionally trained pilots. Indeed, comparing anything to the airlines looks unsafe right now. USA Today should be on a crusade to ban bathtubs and beds, since both kill more people every year than airline crashes.

The article also suggests the accident rate has surged lately, even though the author’s own chart shows a steady, nearly 40% decline in the accident rate over the past 25 years. There is no news to report here, other than the increasing safety–not danger–of personal aviation.

The more incendiary claim is that the NTSB is conspiring to hide the truth about defective parts from the public. Somehow the fact that airframe and engine manufacturers participate in accident investigations, instead of being celebrated as an example of industry working with regulators to improve safety, is cited as evidence that a conspiracy is in place.

In particular, Frank is outraged at the “grandfathering” policy of the FAA, where older airplanes are allowed to operate without some of the safety gear found in new airplanes. But this is no different than a classic car enthusiast driving his 1965 Mustang without a shoulder harness, airbags or anti-lock brakes. You could even argue that it’s worse than aviation, where the aircraft owner has to comply with Airworthiness Directives and pass an annual inspection. What the article seems to suggest is that old airplanes should be banned.

Finally, the NTSB is taken to task for not investigating every last airplane crash. This is again a sign of conspiracy to Frank, not the realistic result of limited government budgets. I personally would be happy to see every fatal accident investigated–while we’re at it, why not offer free beer and guaranteed retirement at age 50, too? It’s simply unreasonable.

Who really wrote it?

The average journalist doesn’t come up with such nonsense on his own—Frank clearly had help. Indeed, this article is nothing more than a plaintiff lawyer’s hit piece masquerading as news.

Flying is getting more dangerous, we’re told, but the paper’s own graph disagrees.

The first clue is the story’s relentless focus on court rulings, as if judges and lawyers are the true arbiters of aviation safety, not the NTSB or the FAA. Here’s a typical example: “USA Today found 80 lawsuits involving 215 general-aviation deaths since 1994 that resulted in a manufacturer paying a settlement or damages of at least $1 million.” This says more about the rapacious lawyers involved in accident litigation than it does about the safety of airplanes. Numerous independent studies show that 80% of fatal general aviation crashes are caused by pilot error. But you can’t sue a dead pilot like you can a big company, so it’s no surprise that court cases go after the manufacturer.

It’s also odd that the specific examples Frank mentions—Cessna seat latches, helicopter fuel tanks and carburetors–are the causes celebres of many high profile aviation law firms. Danko-Meredith is one that has made a living out of suing airplane and helicopter OEMs for supposedly deadly design flaws. On its blog, the firm cheered the USA Today article–probably because they helped to write it!

The real smoking gun is the article’s one-sided reporting of the General Aviation Revitalization Act (GARA) of 1994. This landmark law, passed in the wake of some truly outrageous lawsuits against Cessna and Piper, limits the original manufacturer’s liability and is credited with restarting piston airplane sales in the late 1990s. But the author paints GARA as a sneaky lobbying victory by big business, and an attempt to hide from defective parts. The American Association for Justice, the trial lawyers’ lobby group, couldn’t have written it better.

One question worth asking is why this article was published now. There has been no noticeable uptick in accidents, no high profile crashes and no Congressional investigations. Why did a major newspaper devote so much space to such a non-issue?

The cynical answer is that print newspapers are getting clobbered by online outlets when it comes to reporting real news, so the old guard has resorted to such “investigations” to pump up readership. In the case of the USA Today, the target reader is a business traveler who frequently flies on the airlines. For this audience, what could be a more interesting read than a story about safe airlines and deadly “amateur pilots?” It may not be true, but it sure sells papers—just ask the tabloids how well this strategy works.

But there’s a more likely scenario, especially when you consider the overwhelming influence of trial lawyers on this article. The recent headlines about GM’s spate of car recalls (and the lawsuits that have inevitably followed) may have raised a glimmer of hope among the lawyers that they can find a chink in the armor of GARA. The vast majority of the general aviation fleet is older than 18 years, the law’s limit for liability, so lawsuits are harder to come by these days. What better way to kick off a fresh lobbying campaign than with a front-page story?

It’s easy to get defensive about an article like this, and many pilots’ first reaction may be to simply tune out. But we do ourselves a great disservice when we ignore the general public’s fears about small airplanes. Whether supported by facts (very rare) or by sensationalist journalism (more common), such sentiments are very real and are a major impediment to general aviation’s growth. Non-pilots don’t trust small airplanes, and it’s not enough to recite false statistics like “the most dangerous part of flying is the drive to the airport.”

We have to engage in the debate and present the facts. And the facts show that, like many things in life, the truth is more boring than the conspiracy theories. For every defective carburetor, there are five pilots who ran out of fuel, stalled on final or continued VFR into IMC. The evidence overwhelmingly shows that the onus is on us as pilots to make flying safer. Disturbing, but true.

That’s what makes this article so disappointing. There is a legitimate conversation to be had about flying safety—but USA Today is more interested in fear mongering than advancing safety. That’s the only thing I find outrageous.

The ace of Anabare Bay

Wind shear: a danger vanquished, or, one waiting in the wings?
Scroll to top