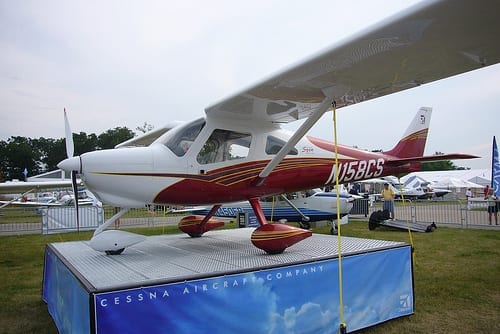 Light Sport Aircraft entered the world with high–probably absurd–expectations. These lighter weight, lower cost airplanes allow pilots to fly without a medical certificate, and were supposed to introduce a new generation to the glories of personal aviation. Flight schools could finally buy fresh airplanes and new pilots could finally afford to own an airplane, we were told.

Cessna’s launch of the model 162 Skycatcher in 2006 seemed to be the tipping point for this movement: if the 70-year old manufacturer thought enough of the LSA market to launch its own design, surely a revolution was afoot. Indeed, the buzz at Oshkosh that year was almost palpable and Cessna took hundreds of orders.

Launched with so much promise, the Skycatcher never met expectations.

But eight years later the Skycatcher is dead, a minor footnote in the long history of Cessna, and both Cirrus and Piper have abandoned LSA programs. The LSA market as a whole has not reached takeoff speed: between 2009 and 2012, total LSA deliveries averaged just 255 per year. That may not be disastrous, but considering there are nearly 50 companies producing LSAs, it’s not good. For comparison, Cirrus alone delivered 276 of its (vastly more expensive) SR20 and SR22 airplanes last year.

What happened? And what does it say about the future of LSAs?

The Skycatcher suffered from a number of self-inflicted errors, including a torturous manufacturing strategy and a constantly rising price. But the problems for the LSA industry go deeper than one botched product, and Cessna’s experience has lessons for all of us. Fundamentally, these airplanes don’t give the target customer what he wants.

That does not mean LSAs are bad airplanes. I’ve flown three of the most popular models (the Skycatcher, Legend Cub and Van’s RV-12) and they are very likable: fun, affordable to operate and well made. The RV-12, for example, offers a faster cruise speed and lower fuel burn than a new Cessna 172–all for $250,000 less.

And in spite of some early concerns, most LSAs have held up well in flight training applications. We have two Skycatchers at Sporty’s flight school, and they have been reliable trainers. Even after a few of those inevitable student pilot scrapes, repairs can be made quickly and affordably. We rent the Skycatcher at $99/hour–a savings of more than $50/hour over a late model 172–and we make money doing it.

Some critics argue that, while the airplanes themselves aren’t bad, the prices are. True, the $75,000 LSA never happened (who promised it would anyway?) but these airplanes are still 50-80% less expensive than new Skyhawks and Archers. That $150,000 Skycatcher may sound crazy, but compared to a $400,000 Skyhawk, it’s quite a savings.

The real failure has not been technological or financial, but in matching a new class of airplanes to a new generation of pilots. The Light Sport/Sport Pilot rule hasn’t inspired a wave of aviation enthusiasts or airplane owners—not even close. Rather, it’s given older pilots a way to keep flying later in life. That’s no bad thing, and I welcome pilots of all ages, but it’s hardly a bold strategy for growing general aviation.

The numbers clearly show that the current LSA designs are not what new pilots want, and it’s about much more than price. Most beginning pilots buy airplanes to go places and take people with them, whether it’s family on a vacation or colleagues on a business trip. Even if a lot of flights are Saturday afternoon hamburger runs, the occasional (or even potential) use of the airplane for transportation is a huge draw. LSAs essentially cap the performance and number of seats–permanently. You’ll never take your family of four to the beach if you buy an LSA, no matter how many hours you log.

It’s also a major mismatch with our industry’s marketing. Learning to fly is all about freedom, we say, yet LSAs severely limit that freedom. I love low and slow flying, and it may be just what a retired airline captain is looking for, but it’s not enough to draw a new person into aviation. After all, most successful people with the money to afford a pilot’s license don’t lust after sub-compact cars.

The Cub clones like this one from American Legend are fun airplanes – but are they what the next generation is looking for?

So while the airplanes themselves haven’t been a failure, I believe the overall Light Sport rule has. LSAs have turned out to be an exit path, not an entry path.

Is there any good news to be found? Maybe.

The Light Sport rule was a risk for the FAA: relaxing regulations, however modestly, is not something they do well. The past decade has proven, though, that looser standards for airplane certification and pilot medical self-certification does not lead to a massive increase in accidents. While the LSA safety record isn’t great, it’s not dramatically different from general aviation as a whole. In the end, the FAA took a risk and didn’t get burned by it.

That matters, because AOPA, EAA and GAMA are now encouraging the FAA to fundamentally reconsider how personal aviation is regulated in the US—not just LSAs. From a major reform of Part 23 aircraft certification standards to the elimination of the third class medical, there are some fairly dramatic ideas being suggested. But instead of just offering utopian visions, these organizations now have data to cite. A decade of experience with LSAs gives the FAA some cover, and maybe even the justification, to take another risk.

This is clearly the new strategy. The general aviation industry seems to have accepted that LSAs will never be more than a niche, so they’re using it as a test bed for new ideas in the larger world of certified airplanes. There’s a long way to go on this effort, but some of the proposed reforms could radically change how we design, build and certify new Skyhawks and SR22s.

We could end up with safer, more capable—and also less expensive—four seat airplanes that can be used for transportation. We could also end up with fewer medical limitations for private pilots. I’ll believe it when I see it, but even a skeptic like me has to admit that we’re closer to those goals now than we’ve been in a long time.

That would be a rich legacy for LSAs, and it would be real progress for general aviation.