Blog - Latest News
You are here: Home1 / Article Archive2 / Dick's blog3 / Searching… for a lost airliner and others 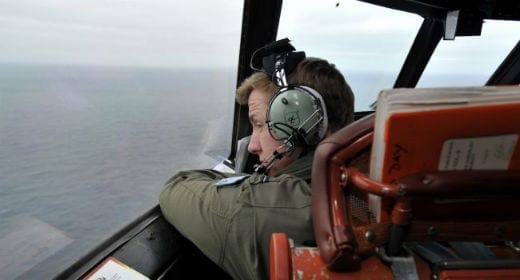 I don’t think that I believed I would ever see a search as long, expensive, and detailed as the one for the Malaysian 777. I did, though, in my time in the business, have some interesting experiences related to searching for lost airplanes. Most were in the seventies, when I was living in Arkansas. I was involved in some because I was an appointed member of the Arkansas Aeronautics Commission. We had no formal role in searches because they were in the capable hands of the Civil Air Patrol and the USAF. We were just an interested party.

Arkansas had a unique problem that led to a lot of crashes. A writer for FLYING once actually wrote that Arkansas is flat. How a society that thought we were hillbillies related that to flat country, I know not. But a lot of pilots didn’t have an appreciation for the mountains of west central and northwest Arkansas. They are not the Rockies but from base to ridge top they are real mountains. The highest is Mount Magazine. It tops out at 2,753 feet according to the National Geodetic Survey.

When they say “rapidly rising terrain,” they mean it.

In 1973, I think I remember that the number of airplanes that had been lost in our mountains was either 57 or 59. That included airline and military as well as general aviation airplanes. It had gotten so bad that we were including terrain warnings on charts as well as nav station idents.

One of our biggest challenges  came after the evening of September 27, 1973. A Texas International Convair 600 (turboprop conversion) airliner went missing that night on a short (65 mile) scheduled run from El Dorado, Arkansas, to Texarkana. When dawn came the next morning, all we knew was that it left El Dorado VFR, that it was missing, and that there had been a line of thunderstorms between the two points at the time of the flight.  There were eight passengers and three crew aboard the 40-seat airliner. Three of the passengers were U. S. Army colonels. One of those was en route to take command of the Red River Army Depot (nee Red River Arsenal) near Texarkana.

Bear in mind that at this time airliners were not required to have ELTs nor were they required to be on IFR flight plans. Needless to say, that changed in the wake of this. Also, at the time, many pilots thought the best way to deal with thunderstorms in propeller airplanes was VFR at low altitude so there was nothing unusual about the crew’s method of operation. Many pilots still fly that way when storms are about.

Everyone thought it would be a simple matter of conducting a systematic search along the proposed route of flight. That is not a heavily populated area but there are towns and folks along the way. Still, there was no report of anything unusual. No low flying airplane or loud noise had been heard.

As the first day unfolded, the realization came that this was going to be a more complex search than originally thought and this resulted in a call for more help. In the end, 224 aircraft flew 1,235.4 hours on 478 sorties. The CAP carried out their methodical search; the rest of us chased down hunches. Most of those hunches were based on experience with airplanes previously lost in the area.

Houston was the home base of Texas International and at one point some people from the airline showed up in a Lear 23, not your ideal low-level search airplane but, hey, they were there. I participated in my Cherokee Six.

The longer we looked and found nothing, the more we grasped at straws. When someone saw what might have been an oil slick in a large lake, there was even talk of bringing in dive teams.

By the third day it was really hard for everyone to imagine what would be the best way to proceed. There had already been another tragedy, the loss of an Army Guard helicopter with three on board, and everyone doubled down on being careful.

Texas International Flight 655, a Convair 600, didn’t make it to its destination–but where did it crash?

There had been no communication with the flight after it departed from El Dorado and the only glimmer of a clue was from a Fort Worth Center controller who saw a VFR target track northwest from El Dorado at about the time the airplane went missing. (Texarkana is west of El Dorado). This could have been connected to a discussion the pilots had with another crew and with weather people about the line of thunderstorms. It had appeared there might be a break in the line to the northwest of El Dorado although some airplanes had been deviating south and one of those reported a pretty good ride through the weather.

There was some intrigue starting to build, too. As things progressed, the Army seemed to become ever more interested in the search. A rumor was floating around that the colonel going to assume command at Red River had a briefcase chock full of top secret documents and the Army wanted that back.

Now I am going to depart from what is a matter of public record and tell you how we actually found the airplane. The public record shows only that it was found but does not relate why. I was there when this happened.

We were staging out of Hot Springs, Arkansas, and, as you can imagine, there were airplanes all over the airport.  On the afternoon of the third day a student on a solo cross-country from an airport in Oklahoma showed up at Hot Springs. The first question he asked was “What are all these airplanes doing here?” When told why they were there he said he had seen something on a mountainside on the way over and it looked like there might be part of a white star on what he saw.

The Convair had a white star on the vertical tail. Searchers hotfooted it to the area where he had made this sighting and it was soon confirmed that it was the Convair. The wreckage was 100 miles north of a direct line between El Dorado and Texarkana. That was far from where we had been looking.

A bit of controversy ensued when the Army quickly lowered personnel into the accident site from a helicopter, presumably to look for the colonel’s briefcase. The NTSB was said to be quite upset, expressing fears that they would muck up the site with their search. No mention was made of how much more you could muck up the remains of an airplane that flew into a 45-degree slope at 188 knots indicated airspeed. The airplane was flying at 2,000 feet and hit the ridge a few hundred feet from the top, wings level, in normal cruise flight. It appeared that both the airplane and the mountain were in cloud.

The terrain was so rugged that only the flight recorders and the remains of the people were removed. I know the wreckage was still there in 2002 and presume that it is still there now, a tribute to the mountains that a lot of people don’t think exist.

Here is a link to the accident report. Unlike modern NTSB reports, this one gets to the point and is relatively brief. If you would like insight into the thought processes that go into a night VFR scud run with thunderstorms about, the cockpit voice recorder transcript is fascinating.

It is also interesting that study of the ground-based weather radar showed that when the flight turned and headed toward the weather, it actually headed for what appeared to the meanest spot in the line. If they had not drilled the mountain, the rest of the evening could have been interesting.

Interpretation of those old monochromatic airborne weather radar sets was more art than science. In another well-documented accident, on April 4, 1977, a Southern Airways DC-9 penetrated an area of weather based on the crew’s interpretation of the onboard radar and actually entered the strongest activity in the area. Both engines flamed out after ingesting an enormous amount of water and ice (hail) and the airplane was destroyed in a power-off forced landing.

One other notable, even unique, search experience came in Arkansas, at Christmastime of 1975. Low weather, mountains and holidays can be a bad combination for general aviation pilots and we learned the weekend after Christmas that there were no less than three airplanes missing in Arkansas. All had been flying VFR in marginal conditions, one at night.  Needless to say the simultaneous searches for a Cessna 206, a Mooney and a Cessna 182 taxed the available resources.

I will quickly say that the available resources didn’t come close to what was available for the search for the airline Convair. That had more to do with the nature of the missing airplane(s), airline v. GA, because  the same number of people, 11, went missing in each event.

A kicker was that the weather was still bad as the searching was to start. To begin, the search was limited to electronic monitoring (ELTs were required at that time but were new and not too reliable) by USAF airplanes high above and by some light airplanes down lower, droning around  IFR listening for signals.

This had all started Friday night, when the 206 went missing. The first airplane found was the Mooney. It was on a direct route from departure to destination and was found Tuesday by a pilot flying a helicopter. Four aboard, no survivors. The ELT was of no help.

The next airplane located was the 182, on Wednesday. The ELT was of help there. The airplane was quite far off a direct route to its destination. Two were lost in that one.

The last one found was the 206. It was not found until Thursday, almost a week after it smacked one of the first ridges it came to in the flight to the south and into our mountains. No help from the ELT. Ironically, the 206 was the last airplane found and was the only one that had been on a VFR flight plan. Five lost.

In a way that event was more trying than was the one involving the missing airliner. Three airplanes is a lot to lose at once and three mysteries to solve at once is more of a challenge.  Too many pilots were learning the hard way that Arkansas is far from flat. I suppose some are still learning. Lost airplanes can be hard to find, too, and, far away from Arkansas, it is starting to look like the missing Malaysian 777 might turn into a long-term mystery.

I have my license – now what?