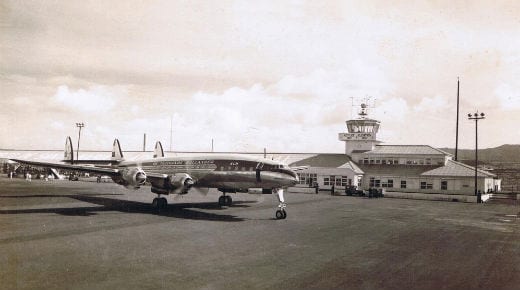 We have been inundated by speculation on the missing Malaysian 777 but nowhere have I seen the event connected to another eerily similar event from over 50 years ago, on March 14, 1962 to be precise.

Flying Tiger 749, a Lockheed Constellation like this one, disappeared between Guam and the Philippines.

On that day a Flying Tiger Line Lockheed L-1049 Super Constellation left Guam en route to Clark Field in the Philippines. It was on a multi-stop (for fuel) trip from Travis Air Force Base in California to Saigon. There were 107 people on board; 93 were jungle-trained Army Rangers en route to South Vietnam.

Eighty minutes after leaving Guam, the pilot radioed a routine position report. Another position report was due just over an hour later but it never came. Guam attempted to contact the flight but was not successful and the aircraft was not seen or heard from after that.

The search that commenced was the largest sea and air search in the Pacific to that date and the record probably stood until the search for the Malaysian 777. Ships and airplanes from four branches of the service searched more than 200,000 square miles over the course of eight days.

The only clue was a report of what appeared to be an in-flight explosion from the crew of a tanker along the route. No trace of wreckage or debris was ever recovered.

Despite worldwide news coverage and a massive search, the Connie was never seen.

Just as now, there was speculation and examination of conspiracy theories. One related to the fact that another Flying Tigers Connie headed for Vietnam crashed on the same day. It encountered difficulties and crashed and burned in the Aleutian Islands. Flying Tiger Lines said either or both could have been sabotage but added that this was a “wild guess.”

The tanker crew that observed what could have been an in-flight explosion went to the area where objects were thought to have fallen into the sea but after a six hour search they had found nothing.

The accident report said only that Flying Tiger Line 739 had been destroyed in flight.

Of course there is little similarity between the Super Connie and the 777. The Connie had temperamental piston engines that were pushed to the max where the 777 had those reliable turbines.

The communications and navigation gear was a world apart, too, and today satellites keep a constant watch on just about everything. The similarity is there, though, and I offer this just to show that this had happened before, and not just to Amelia.

How it finally works out for Malaysia 370 wasn’t known at the time this was written but for the sake of all concerned I hope more is learned than in the cases of Flying Tiger 739 and Amelia.

My thanks to Wikipedia for refreshing my memory of something that happened over 50 years ago. I remember thinking at that time that if something like that had to happen, best it happened on the way to Vietnam instead of after the soldiers had done their business there and were on the way home. But I guess I was thinking at least a little bit like a soldier because my Honorable Discharge was less than a year old at the time.

Building a career by believing in your dream

From the archives: Journey to Wichita
Scroll to top