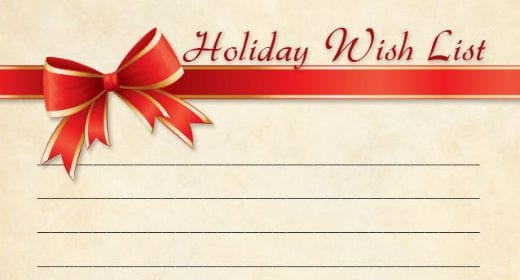 A non-pilot friend recently asked me, “What do pilots want for Christmas this year?”

Since he knows I work at Sporty’s, I think he was really looking for the hot aviation gadgets of 2013. And while that new Garmin GPS watch is pretty cool and ADS-B receivers are very popular, those aren’t the answers I gave him. As I thought about what would make pilots happy in the year ahead, some much bigger wishes came to mind. The more we talked, the more wishes I added to my list.

So in the hope that Mr. Claus is reading this (he is a pilot, right?), here is my list of Christmas presents I’d like to receive on behalf of the general aviation industry. Many of these may be long shots, but ’tis the season to dream big.

1. The FAA comes to its senses and eliminates the 3rd class medical. This has been a hot topic for years, but the FAA’s recent announcement of a draconian sleep apnea testing policy seems to have ignited a fire. Pilots have long known that the medical certificate doesn’t improve safety, but the latest proposal would change it from merely ineffective to dangerous “gotcha medicine.” It’s simply an idea whose time should never have come. But like the income tax, the third class medical is an example of a program that is impossible to kill once it gets created. Maybe in 2014 someone in Washington comes to their senses, acknowledges that this relic does nothing but add cost and scare away potential pilots, and kills it once and for all. AOPA and EAA have a plan to replace it–the FAA needs to be humble enough to accept an outside idea.

2. Shell’s “drop-in” 100 octane unleaded fuel catches on. The recent news that oil giant Shell has developed a 100 octane unleaded fuel blindsided most of the industry. For the past few years, we’ve all been adjusting to a future that does not involve 100LL. Whether the future is diesel, electric or something else, everyone agreed that a simple replacement would never exist. Those calculations seem to be out the window now, as Shell claims its fuel behaves remarkably like 100LL, but without the lead. They even think the price will be competitive. Here’s hoping this initial burst of good news holds up, and Shell can bring this fuel to market quickly and at a good price. It would remove the cloud of uncertainty that hangs over high performance airplanes, and just might spur some growth in general aviation.

3. The Part 23 certification overhaul makes a difference. After a lengthy industry effort to rewrite the rules for certifying light airplanes, Congress recently passed legislation that forces the FAA to act on these recommendations. The goal of the Small Airplane Revitalization Act is to make it faster and easier to certify new airplanes, which is prohibitively expensive right now. The end result should be lower costs and increased safety, since new safety technologies could be added to more airplanes more quickly. This is a noble effort, but similar attempts have died out in the past. My wish is that this effort is taken seriously by the FAA, gains legs in 2014 and starts to change the way airplanes are designed and built. There are vast trickle-down benefits from this if it really works.

4. Airports open up and start acting like businesses instead of prisons. I can’t imagine a vibrant future for general aviation that doesn’t have airports at the heart of it. Airports are the first point of contact for almost every aspiring pilot and they are the only point of contact for non-pilots in the wider community. We’re incredibly lucky in the US to have thousands of GA airports, but many seem to shout “go away.” No restaurant would ever succeed if it hid behind barbed wire fences and rusted signs; airports aren’t any different. Next year, let’s hope flight schools, flying clubs and FBOs all make an effort to open up and welcome the public. Sure, security rules can make it difficult, but even subtle things like a good sign by the road or an open door can make a difference.

5. Refurbished airplanes hit the market in force in 2014. While the Part 23 overhaul may pay dividends long term, a more immediate impact may be felt from the many remanufactured airplane projects that have either been announced or are shipping. Whether it’s a diesel-powered Cessna or an overhauled jet, these airplanes offer good performance and reliability, but at significantly lower prices than new airframes. Besides being a better value, many offer some truly innovative features, and are a great way to get new pilots buying airplanes. It feels like we may be at a tipping point with some of these projects, and I hope they catch on.

6. Congress makes someone answer for random pilot detentions. What started out as a few isolated incidents soon became front page news, as dozens of pilots started complaining about being stopped by local law enforcement or Customs officers for no reason other than “suspicious flight profiles.” Since then, AOPA and Congress have been pressing anyone and everyone for answers–and they’ve hit a brick wall. These warrantless stops are a disgrace, and Congress needs to keep the pressure on. Hopefully in 2014 these stops will cease, but at the very least, some security genius needs to explain their reasons for this massive overreach.

7. Pilots spread a little Christmas cheer all year round. Pilots are often considered to be part of a brotherhood: we help each other out when in need and we welcome new people in with open arms. That’s certainly true for a lot of pilots, but I’ve seen some depressing examples of the opposite lately. My hope is that we’ll carry the holiday spirit into the new year, going out of our way to stay positive, welcome new new pilots and encourage lapsed pilots to come back. Aviation is not a country club and it’s not our job to police who gets admitted.

By the time I was finished, my friend was sorry he had asked. But he did agree to go flying with me, so I’m already working on #7.

How I got involved in aviation – and why

Debate: do you have to be an enthusiast to be a good pilot?
Scroll to top