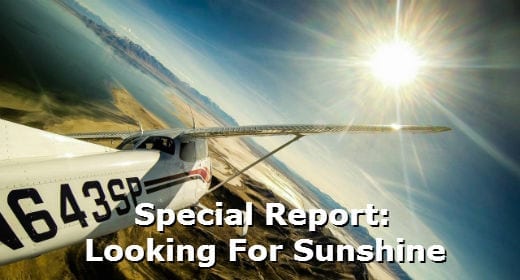 Editor’s note: This article kicks off our latest Special Report, “Looking for sunshine.” Over the next two weeks, we’ll examine the current state of general aviation and hear from some companies that are trying to create a stronger future for pilots. Check back for a new article every day.

“GA is dying.” We hear this statement so often that it’s become accepted wisdom among many pilots. But it’s wrong.

General aviation certainly is weak (as we chronicled last year in our first Special Report), but there’s a difference between dying and declining. One suggests a terminal condition, the other a situation that can be improved with the right actions–and I firmly believe that GA can recover. Recovery doesn’t mean we’ll return to the glory days of the 1970s, but a more vibrant industry with new pilots and new airplanes is entirely possible.

So don’t believe the death sentence: while it may look different, GA can come back.

How to engineer this turnaround is obviously the problem, and everyone has an idea or two. A lot of talk centers around new nationwide marketing campaigns or radical ways to reduce the cost of flying. Neither of these ideas is necessarily bad, but they miss the bigger point.

What message are we sending about our airports and our industry as a whole?

In my experience as a retailer and product designer, big discussions about marketing plans and pricing strategies are usually what happens when the product isn’t good enough. Great products that deliver real value for customers (read: people really like it) catch on, even with mediocre marketing or a high price. Look at the money people spend on high end headsets–every month, hundreds of pilots drop $1000+ for a headset, even when there are options available for less than $200.

The fact is, general aviation’s “product,” whether it’s the flight training experience, the airport experience or the new airplanes for sale, just isn’t good enough right now. Lower costs would help, but more value for the money is an easier and more sustainable way to attack the problem.

An interesting parallel here involves the big three American car companies in the late 2000s. While Ford, Chrysler and General Motors reminisced about “the good old days” of big trucks and 50 cents/gallon gas, their vehicles became stale. Meanwhile, Asian and European car makers were innovating, offering more attractive options and winning. The big three failed to adapt their products to a changing market and they nearly died because of it. This changing market was the real reason for decline; the economic crash was simply the final blow.

The same is true for GA. Faced with radical change, we’ve more or less hidden from it. Just like the big three, we’re often too focused on the glory days or the bad economy to imagine a future that may be smaller, but much brighter.

What changes do we face today? There are obviously a number, but two types of change–cultural and technological–have had the largest impact on general aviation.

The cultural changes have most influenced how people learn to fly and how they stay active once they have a license. From the rise of two income families to always-on jobs to busier kids’ schedules, everyone has less free time today (or at least feels like it). And yet simultaneously there’s never been more competition for that free time, whether it’s 500 channels of satellite TV or the latest internet distraction.

In short, the prospective student pilot today has dramatically different desires and expectations compared to one from the 1970s. In particular, the time commitment required to earn a pilot’s license has become as much of an impediment as the cost. Many of the people with the money to afford flying–and there are still a lot of them–don’t have the time for it.

The rising price and declining availability of avgas is trend that must be dealt with.

Advances in aviation technology have been no less dramatic. On the good side, new avionics have added impressive safety and convenience features to the cockpits of even the most basic airplanes. More recently, the iPad revolution has changed the way many general aviation pilots fly.

But there are plenty of negative changes brought on by technology, too. Foremost among them is the elimination of 100LL avgas, which will eventually require new or modified powerplants for thousands of light airplanes.

How we as an industry react to these changes will determine to a great degree how successful we are in building a healthier future. And unlike the health of the overall economy or the state of politics, the general aviation industry can control these issues.

Fortunately, all is not lost. A few organizations are innovating in the face of this change, daring to challenge the status quo or at least trying a new approach to old problems. Some of these companies are startups with tech-savvy leaders; others are long-established names that simply never lost their restless spirit. All of them are finding success in a weak market.

Over the course of the next two weeks, we will hear from these companies. We’ll hear their diagnosis for GA, their vision for a more vibrant future and what role their organizations can play in helping us get there.

In week one, we’ll tackle the cultural issues, with an emphasis on the flight training and flying club experience:

In week two we’ll examine the technological issues we’re facing and how to embrace them:

Last but certainly not least, Richard Collins will offer his unique insight. As an observer and participant in general aviation for over 50 years, he will share a first-hand account of how the industry has changed (and how it hasn’t). His suggestions for fixing general aviation are provocative, but well-reasoned.

As usual at Air Facts we want to hear from you, so we’ll be asking for your comments on each of these articles.

Let’s be clear: just because some companies are innovating does not mean all is well. We recognize the existential threats facing general aviation and this Special Report is not a naive attempt to hide from them. But these stories should give us hope. GA isn’t dead, just like Ford wasn’t dead in 2009. We just need to size our industry to the new reality and start putting out a good product again. Easier said than done, but some of these companies offer at least a first step.

On an individual level, it’s important that we don’t allow our memories of “what used to be” to drag us down. The next generation of pilots may not expect $2 avgas or a host of other things we take for granted–and they may be entirely different types of people. That’s OK. As a recent Air Facts contributor (and new pilot) wrote: for a new student pilot in 2013, these are the good old days!

From the archives: Wolfgang Langewiesche flies across Africa

A customer-centric approach to pilot training
Scroll to top