Blog - Latest News
You are here: Home1 / Article Archive2 / John's blog3 / 7 instrument approaches you have to see to believe 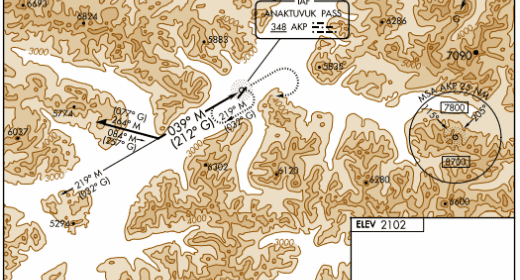 In spite of what new instrument students might think, not all IFR approaches are straight-in ILSs to 200 and 1/2. Some airports just don’t lend themselves to an approach, due to terrain, obstacles or airspace issues. But these challenges aren’t enough to prevent creative TERPs designers from finding a solution. One look at the seven examples below shows that where there’s a will, there’s a way.

We’ve restricted ourselves to US airports for this article, and it should go without saying that these charts are not to be used for navigation.

Some interesting approaches are hiding in plain sight, serving major airports in populated parts of the country. A good warm-up is the VOR/DME to runway 15 at Martin State Airport near Baltimore. You may have practiced DME arcs during your instrument training, but this entire approach is one big DME arc:

How about an approach that is completely level? The NDB/DME approach to Haily, Idaho, requires pilots to fly the procedure turn at 8000 ft., cross the final approach fix at 8000 ft. and stay right there–minimums are 8000 ft.

When pilots hear “unique approach,” Aspen is usually the first airport that comes to mind. It has quite a reputation, and it’s well-deserved. The approach parallels some serious mountains and terminates at an airport nearly 8000 ft. above sea level. There are numerous step down fixes, including a chop-it-and-drop-it final segment that requires pilots to lose nearly 1900 ft in just 3.1 nm. And the missed approach? How about a localizer back course from a navaid on top of a mountain?

Not all approach plates require fancy navaids. Two of the busiest airports in the US feature charted visual approaches that are far from simple. First up is JFK’s VOR or GPS approach to runway 13L and 13R. How can it serve both runways? It’s really a VOR approach that turns into a visual approach, with a series of visual landmarks and lead-in lights. Review the chart below, then watch it flown in this video.

Boston’s Logan Airport also has a charted visual approach, the Light Visual to runway 33L, which requires pilots to fly a radial until spotting the Boston Lighthouse, then turn left to intercept the final approach course. It’s mainly for noise abatement, and it’s only used with VFR minimums:

Of course for truly bizarre approaches, there’s no place like Alaska. The combination of rugged terrain, sparse navaids and limited radar coverage makes for a truly challenging place to fly IFR. The NDB-B approach to Anaktuvuk Pass is a great example. How about an approach with 4500 ft. minimums? One glance at the terrain on the chart below explains why:

Some procedures in Alaska stretch the definition of “instrument approach.” The NDB runway 34 approach at Sparrevohn, Alaska, advises “successful go-around improbable if initiated past the MAP,” hardly a reassuring thought. This video shows just how interesting the airport is.

Hands off another pilot’s airplane: always the case?