Blog - Latest News
You are here: Home1 / Article Archive2 / Young Pilots3 / The best perspective is from above 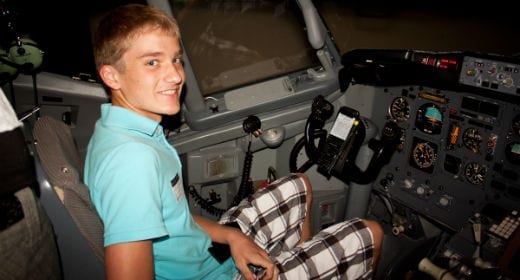 Editor’s Note: This is the latest article in our Summer Writing Challenge. We asked young pilots (16-24) to share their stories about learning to fly, and we’ve heard from several already. If you or a young pilot you know has a story to tell, email us at: [email protected]

I began flying four years before I could even drive an automobile.

The author got a chance to fly a 737 simulator.

My uncle Butch, now a retired CFI, had taken me on an introductory flight when I was only 12 years old. From the moment the tires left the tarmac on that hot Florida day, I knew my ultimate goal in life was to become a pilot. As the feeling of flight took me further and further away from our hometown airport, I began to realize this is what I wanted to do for the rest of my life.

From the right seat of that 172, I could see what felt like the entire state of Florida. I took on a new perspective on everything from the mangrove trees on the coast to the Everglades in the south. I could pick out every building, every house, every car, and every river for miles and miles. I was looking down on the Earth from what seemed like the eyes of God.

I had seen pictures like this in movies and TV shows, but these viewpoints were just images. They were nothing more than a still image of what was really a moving picture. From the window of that airplane, I was able to see the moving picture, and watch all of these characters work together as one really complex machine that you just can’t see from the ground. I was able to see the world as more than our own personal group of friends and family. It wasn’t until then that I really realized that life was about more than just graduating from college or getting a job. Rather, it was about just being human, and enjoying every day you had.

I just wanted to be able to experience this for myself. To be honest, I went home that day and felt like I just lost a friend whom I only barely had the chance to meet. I had fallen in love with flight, and as E. B. Jeppesen would put it, “There’s a big difference between a pilot and an aviator. One is a technician; the other is an artist in love with flight.” I already was an aviator. The only thing missing was my pilot’s certificate, which would not only allow me to show off to my friends, but also allow me to join the community of pilots and truly experience the feeling of flight for myself. Unfortunately, there was one minor roadblock to my dream–the average 12-year old has no way of affording a lifestyle as expensive as aviation. Luckily, I was no average child.

I began programming computers before I went to my first middle school dance. My idea of a fun Saturday night was making a Java program that I would later use to quickly study vocabulary for an English class I cared little about. As I progressed through middle school and on to high school, my knowledge of operating systems and programming concepts grew intensely. I knew I needed a job to afford flight training, so I began to apply to everywhere my friends were applying to, which consisted of mainly grocery stores and restaurants.

Unfortunately, I was never contacted for an interview. My dream of flying would have to remain a dream for years to come. The best I could do was continue to read through the Airplane Flying Handbook and learn as much ground school material as possible before I even started my training. Perhaps I would be able to afford training after I graduated from college, which seemed like forever away.

But like I said, I was no average child. My experience in programming would eventually allow me to network with people I knew and land–no pun intended–a job at a local software development company as a tech support representative and part-time software developer, at the age of 17. With this job came the last piece of the puzzle that I needed, which was a method of funding my passion for quite possibly the most expensive hobby on Earth.

A few months ago, I walked into my local flight school and asked an instructor for information on how to begin my flight training for the Private Pilot Certificate. After five years of waiting, I am finally able to pursue my dream of flight.

It may be easy for us pilots to lose the feeling we had when we first discovered flight, and forget one of the most important roles we have as the highest form of life on Earth. As we fly, we must remember that we have a view of the Earth that only a select group of people will ever be able to experience. There are people of all age groups that dream of being in the sky along with us. Don’t believe me? Look down the next time you fly. Count the number of people that look up to see what that noise is overhead. Those are the people who spend their nights dreaming of flying.

We must remember that in the declining number of active student pilots today, there is an increasing number of aviation onlookers who wish to learn how to fly. We must remember that next time we see a kid hanging out at the airport wandering around, to invite him or her into our hangar and show them just how amazing airplanes look from the inside. Help them out, ask them questions, and teach them things.

You never know, they may very well be the next Sullenberger.

Michael Janik
Michael is an avid Private Pilot and an AGI. He worked every day after high school to fund his flight training and spends any money he has left over on flying. He hopes to become an ASES and ASEL rated commercial pilot one day. His dream is to fly in the Alaskan bush or for a floatplane operation, landing in areas that perhaps no one has before.