Blog - Latest News
You are here: Home1 / Article Archive2 / Dick's blog3 / The Altar of Safety: does the FAA know it all or does it know anything... 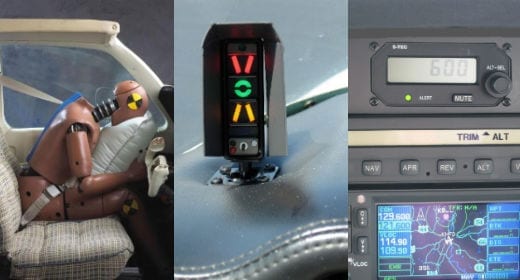 In the late 1950s or early 1960s, I went to a gathering at the Basin Harbor Club in Vermont. The purpose was to meet the first administrator of the brand-new FAA, retired General Pete Quesada.

Not one to mince words, Quesada told us that general aviation safety was awful and that in a year he would orchestrate a 25-percent improvement in the record. He was strong on resolve but didn’t offer many specifics.

Needless to say, the record did not improve. That was more a reflection on the nature of the activity than on Quesada. The Draconian measures he would have taken to mandate safer skies just wouldn’t fly.

Can seat belt airbags save lives?

In the over half a century that has passed since then, the FAA has rediscovered the fact that the general aviation safety record is not good many times. Each time, they come up with things that need to be done to shape us up. In the latest utterance the FAA proposes, for older airplanes, seat belt airbags, angle of attack instrumentation and two-axis autopilots.

There is no definition of “older.”

Somebody in the FAA should have known that even most newer GA airplanes do not have airbags or AOA indicators. Virtually all newer airplanes do have autopilots but so do a lot of older ones.

It should be embarrassing for the FAA to display such a lack of awareness but, hey, at least they are trying.

Let’s look at what FAA proposes.

Years ago the FAA mandated that all new airplanes include shoulder restraint systems. There was concrete evidence that this could help. I sat through some pretty gory slide presentations at safety meetings and after looking at the results of face to instrument panel collisions, I was convinced. It is interesting that at the same time the potential benefits of crash helmets were also demonstrated. Nobody bought into this though it was fun to imagine how we would decorate our helmets.

Would airbags be as beneficial?

In the vast majority of general aviation accidents there are either fatalities or no injuries at all. Accidents causing serious injuries occur, for sure, but they are a much smaller part of the picture.

Airbags have saved a lot of lives in cars but auto and airplane accidents are quite different. There is more speed involved in most airplane crashes and there is also usually a vertical deceleration component that is lacking in most car crashes.

I don’t think that airbags would likely make much difference in most fatal general aviation accidents. They could make a difference in the outcome where there are serious injuries. For that reason alone, they are worthy of every consideration as might the installation of shoulder restraints in older airplanes that do not now have them.

Angle of attack indicators are increasingly affordable – should they be in more airplanes?

Managing angle of attack (AOA) is a critical element in flying safely but it isn’t emphasized in training. Make no mistake, though, it is real, and a pilot who understands only airspeed control is lacking in basic knowledge.

When I was instructing, mostly in the mid-1950s, I put a lot of emphasis on students understanding angle of attack. This was critical in the lower powered airplanes with not a lot of margin between cruising and stalling speed. When you read this, remember it was AOA as taught by a 20 year old flight instructor at a time when most instructors ignored the subject.

I told students that the angle of attack in level flight was the difference between where the nose is pointed and where the airplane is going. Power back and slow down and the nose might be high but the altimeter steady or showing a decline. Push that difference between where it is pointed and where it is going up to about 18 degrees and the airplane would stall.

That was easier to demonstrate if the airplane had a vertical speed indicator.

The plot thickened in level turning flight where the relative weight increase because of g-loading resulted in an increase in angle of attack. Most pilots are aware that the stalling speed increases a bit in a 30-degree bank and a lot when the bank becomes even steeper as the g-load in a level turn increases but this was difficult for a kid to teach to GI-Bill students. Still, I tried to get them to understand that while the stalling speed might vary based on conditions, the stalling angle of attack is a constant.

In virtually all the low speed loss of control (stall/spin) accidents, the pilot was pulling back on the elevator control when control was lost. Back stick increases angle of attack. A pilot should not need instrumentation to tell him when angle of attack is encroaching on the stalling point but maybe the number of this type of accident suggests that pilots need help even though this should be relatively easy for a pilot to visualize.

While I was doing this, the CAA (now FAA) actually had a Piper PA-11 fitted with a crude angle of attack system. It had, I think, five lights and as the angle of attack increased more lights came on. Light them all and, boom, the airplane stalled.

Increased use of autopilots is the FAA’s third suggestion for improving GA safety.

So, would angle of attack instrumentation help to reduce the number of stall/spin accidents? I don’t know but the fact that most of the certified airplanes in these accidents have stall warning systems suggests otherwise. It seems to me to be more of an area for education. Also, the criteria for the stall warning to sound might be revised upward and relate to angle of attack instead of airspeed.

Finally, the FAA suggests more autopilots for older airplanes. I don’t think there are many airplanes used for IFR that don’t have at least a basic autopilot, and this is as it should be. As for airplanes used for VFR flying, autopilots are nice to have but they don’t make much contribution to reducing the risk. Of the three areas, this one seems mostly beside the point.

So, what do you think of the FAA’s call for airbags, angle of attack instrumentation, and autopilots in an effort to improve the safety record?