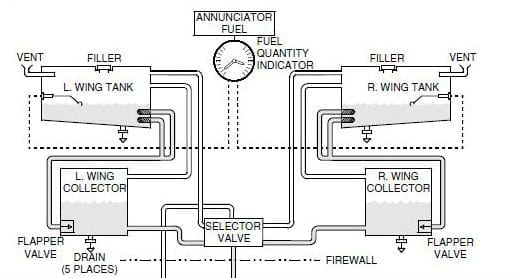 The chute saved the day, but why was it needed in the first place?

We stink at fuel management.

The latest evidence? On January 23, a Cirrus SR20 crashed a few miles short of the runway in Danbury, Connecticut and made national headlines for its colorful parachute getting caught in power lines. While the media focused on the parachute, most pilots wondered what went wrong to necessitate pulling the handle. Surely a plane as advanced as this one couldn’t just run out of fuel. There must have been a mechanical problem, right?

While the final cause won’t be out for a long time, the initial NTSB report is pretty damning:

Simply put, they ran out of gas, most likely due to bad planning but possibly due to some major in-flight fuel leak. How does that happen in a fairly new airplane with a glass cockpit, a fuel totalizer and a flight instructor on board? It was only a 32 minute flight from GON (their departure airport) to DXR (where the airplane came up short), so barring a mechanical problem, that means they took off with about 30 minutes of fuel on board. That is inexcusable. They were barely legal to land with that much fuel, much less take off. Anyone who has ever seen the fuel gauges indicating 30 minutes knows how frighteningly low that looks.

A more disturbing part of this particular accident is the initial reaction by many pilots in the Cirrus community. There was celebration that the pilot had been smart enough to use the parachute, and all three on board walked away. “Pull early, pull often” has become the mantra in Cirrus training, and this accident proves that it is working, many said. The pilot even raved about his training, saying he was ready to pull the chute. Some went even further, saying basically, “Who cares why the engine quit? Kids had fathers that night because of the parachute and that’s what counts.”

I find this attitude alarming. It’s like applauding the drunk driver for wearing his seat belt after he wraps his car around a tree. Sure, it’s nice that he did that—it probably saved his life. And maybe that means our public service campaign about seat belts is working. But it cannot excuse the terrible decision he made in the first place.

In the end, the parachute simply improves the odds of survival in a crash. It cannot improve flight safety anymore than an air bag can help you drive through the snow.

Don’t get me wrong: I’m not a Cirrus-hater or a parachute skeptic. The SR20 and SR22 are marvelous airplanes, and the whole airplane parachute system has saved a number of lives (not to mention the many passengers who are comfortable flying in small airplanes because of it). But all it did in this situation was bail the pilots out after a terrible mistake.

The more important conversation to have is not about “pull early, pull often,” but about how can we avoid accidents like this in the first place.

Many aviation safety experts hoped that glass cockpits and their built-in fuel totalizers would eventually eliminate fuel exhaustion accidents, which are the most preventable kind. The trend did decline some in the early 2000’s as glass cockpits became more mainstream, and there is anecdotal evidence that airplanes with integrated avionics have fewer crashes due to fuel exhaustion.

But this decline has leveled off recently, and it remains one of the top ways to crash a general aviation airplane. Nearly 100 airplanes go down every year because of fuel mismanagement, a number that should embarrass us as pilots. As this accident shows, it’s not just 50-year old airplanes running out of gas.

Like many things in aviation, the best reaction is to focus on the fundamentals. Those do not change, no matter what airplane you’re flying and what the avionics are.

Everyone has their own rules for fuel management, most of them proven by experience. Here are mine:

In the end, dealing with fuel planning is just like dealing with weather: we need to be skeptical and we need to build in some margins. When in doubt, land and figure it out with a fuel truck waiting.

Washington Report: sequestration and the FAA
Scroll to top