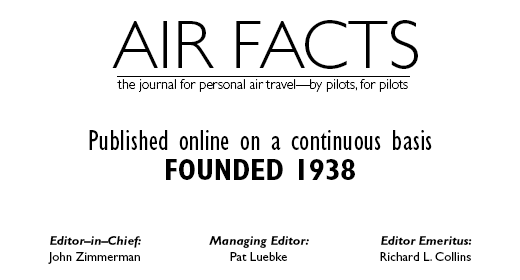 A couple of years ago when we were hatching the idea for an online magazine called Air Facts, I made it clear that, because of my age, I certainly couldn’t be the future of any such publication.

From the start, I worked with John Zimmerman from Sporty’s and Pat Luebke, an independent editorial contractor. Coming in, John was new to the magazine business and it took some coaxing to get him started writing. Once under way he accelerated like a jet and has become a prolific and talented writer.

John has also done most of the production of Air Facts and I for one think it is a really good-looking site. That is all John’s doing.

Up to now, we have not had a masthead. I presumably had the title of Editor-in-Chief and John and Pat didn’t have a title.

Now we are adding a masthead and I am going to move aside and let John have the title he deserves: Editor-in-Chief . I will still be on board but as Editor Emeritus, or, old coot who is still hanging around.

To illustrate the democratic nature of this activity,  I asked Pat Luebke what title she would like to have. For the many years I worked with Pat at FLYING she was on the other side, the advertising side, so I wondered what editorial title she would like. Her choice: Managing Editor. So be it.

My personal thanks to all who have supported Air Facts, both as readers and writers. A publication is no more than its content and its audience.  Air Facts scores at the top on both counts and I am confident it will continue to do so.

Tale of a winter month: a look at February accidents

The Great Debate: are flying clubs the answer?
Scroll to top