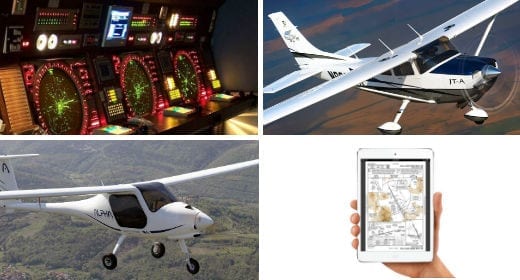 Pilots are famous for being passionate about flying, but they’re also famous for being pessimistic about flying. Plenty of pilots like to grumble about the state of aviation these days, decrying high fuel prices, expensive airplanes and an intrusive FAA. If only we could go back to “the good old days,” they say. We’re not completely innocent here at Air Facts, either–just read our Special Report from a few months ago. Judging by some of the comments, general aviation is in a death spiral.

For an outsider or a new student pilot, this negativity can be very discouraging. Why invest lots of time and money into a hobby or profession that seems so hopelessly weak? If the people who are already pilots think it’s so bad, why would anyone new want to join in? Indeed, we do ourselves no favors when we emphasize the negatives and ignore the positives.

Call me hopelessly naive if you want, but I think there is still a lot to be thankful for as pilots. With that in mind, I’d like to offer seven good things about general aviation right now:

Air Traffic Control free for GA pilots – something to appreciate.

1. Start with the obvious, but under-appreciated, fact that the US is still by far the best place in the world to fly (sorry international readers). Both the infrastructure and the culture provide a strong foundation for aviation in general and private pilots in particular. Just unfold a sectional and look at how many airports there are in the US–and they’re not all in major cities either. Then consider the great service we get from Flight Service and Air Traffic Control (heck, even most FBOs) without paying user fees. There is probably no other place on Earth where you can take off with an iPad and a credit card and fly across the country–no flight plans, no government approval, and no radio required. That’s real freedom, and it’s to be appreciated.

2. The Light Sport Aircraft market is robust. Sure, LSAs aren’t $50,000 like some had hoped, but this is still a vibrant niche, with entrepreneurial companies competing fiercely with each other to design higher performing and less expensive aircraft. Pipistrel thinks it can build a sub-$100,000 training airplane. That may sound expensive, but against a $300,000+ Skyhawk, it’s radical innovation. And Pipistrel is hardly the only company with big ideas. In fact, the most common complaint is that nobody can keep track of all the new companies in the market. True, it’s somewhat chaotic, and it’s unlikely that all of these companies can survive–but when’s the last time you heard pilots complain about too much competition?

3. In a related area, aviation companies are finally working on new engine designs. For decades, avionics have advanced rapidly, but engines have been stuck in the 1940s. This while gas prices have rocketed into the 21st century. That’s finally starting to change, as diesel and electric powerplants are getting a serious look. Cessna introduced the Skylane JT-A this year, their first diesel airplane that has a real chance of being delivered. This could be huge for international customers, and increasingly attractive for US customers too as avgas gets more expensive and eventually fades away. On the lower end, lots of companies are experimenting with electric airplanes, either as hybrids or completely gas-free. Electric motors won’t replace Cirrus SR22s anytime soon, but in the next decade they very well might enter the training and recreational flying market. This innovation, combined with new diesel technologies, has the potential to lower costs and is a good sign for pilots.

4. Oshkosh, aviation’s grand fly-in/family reunion/trade show, is as strong as it’s been in a decade. While so much of aviation has been shrinking, EAA’s big show every summer remains a spectacular event. It’s not perfect (what big event is?), but it represents aviation at its messy best: homebuilts, antiques, seaplanes, military jets, warbirds, production airplanes, business jets and just about every other kind of flying machine sit side-by-side at KOSH. The entire aviation world comes together here to celebrate and show off what’s new. Oshkosh is also invitational, welcoming non-pilots and dreamers by the thousands to taste aviation and join the family. Anyone who’s down on aviation needs to spend a few days in Wisconsin this summer and feel the energy that’s still there.

5. Airplanes are built to last. This is a problem in some pilots’ eyes, as they argue that we simply built too many airplanes in the 1970s. But while this may be a problem for new airplane salesmen, it has left us with a glut of affordable airplanes that provide good utility. Sure, a 1977 Cessna 182 may sound old, but with some smart upgrades it can be a fantastic airplane for under $75,000. And while a 1977 car may be worthless, a 1977 airplane–if maintained properly–can fly on for many more years. Maybe the FAA deserves some credit for demanding airplanes be well-built; maybe the manufacturers just believed in the product and built them the right way. Whatever the cause, there is a healthy market in used airplanes that allows many pilots to own quality airplanes that would otherwise be unaffordable.

The iPad is making flying less expensive, at least by a little.

6. The iPad is making flying less expensive, at least a little. One of the reasons Apple’s wildly popular tablet has been such a hit is that it lowers the cost of flying–replacing expensive paper chart subscriptions and even more expensive aviation GPSs and XM Weather receivers. The savings can amount to more than $2000/year in chart and subscription fees, which is enough for about 30 hours of gas in a 172 or Cherokee. And these savings aren’t due to an inferior product; if anything, the iPad is a step up. The fierce competition between app developers ensures that quality and features will only increase in the year ahead. In a world where so many things are getting more expensive, it’s nice to have one product that delivers more features for less money.

7. Pilots still help other pilots. One of general aviation’s defining characteristics is its spirit of camaraderie and brotherhood. Go to any fly-in or airshow, from a local pancake breakfast to Oshkosh, and you’ll feel it right away. People who would otherwise have nothing in common and never be friends can instantly connect when aviation is involved. I’ve been bailed out by this spirit more than once, from a loaner car at a remote airport to a mechanic’s free help on a Sunday night. These people helped simply because, as the airport manager said after I returned his car, “That’s what pilots do–we help each other.” Try getting that kind of service at a gas station or from a stranger on the street.

For sure, everything is not rosy–general aviation faces a number of serious problems as 2013 dawns. But let’s not get carried away. As the list above shows, there is still a lot to be thankful for (and I probably missed a lot). For me, the good far outweighs the bad.

The next time a student pilot or non-pilot asks you about flying, tell them about the unforgettable sunsets you’ve seen from the cockpit or the efficient day trip you did in a small airplane that would have been impossible on the airlines. Tell them how learning to fly changed your life, and how a pilot’s license never expires. Leave the laundry list of complaints for another day.

So here’s a new year’s resolution for you: let’s share the passion, not the pessimism.

What’s on your list? What do you think is right with aviation right now? Add a comment below.