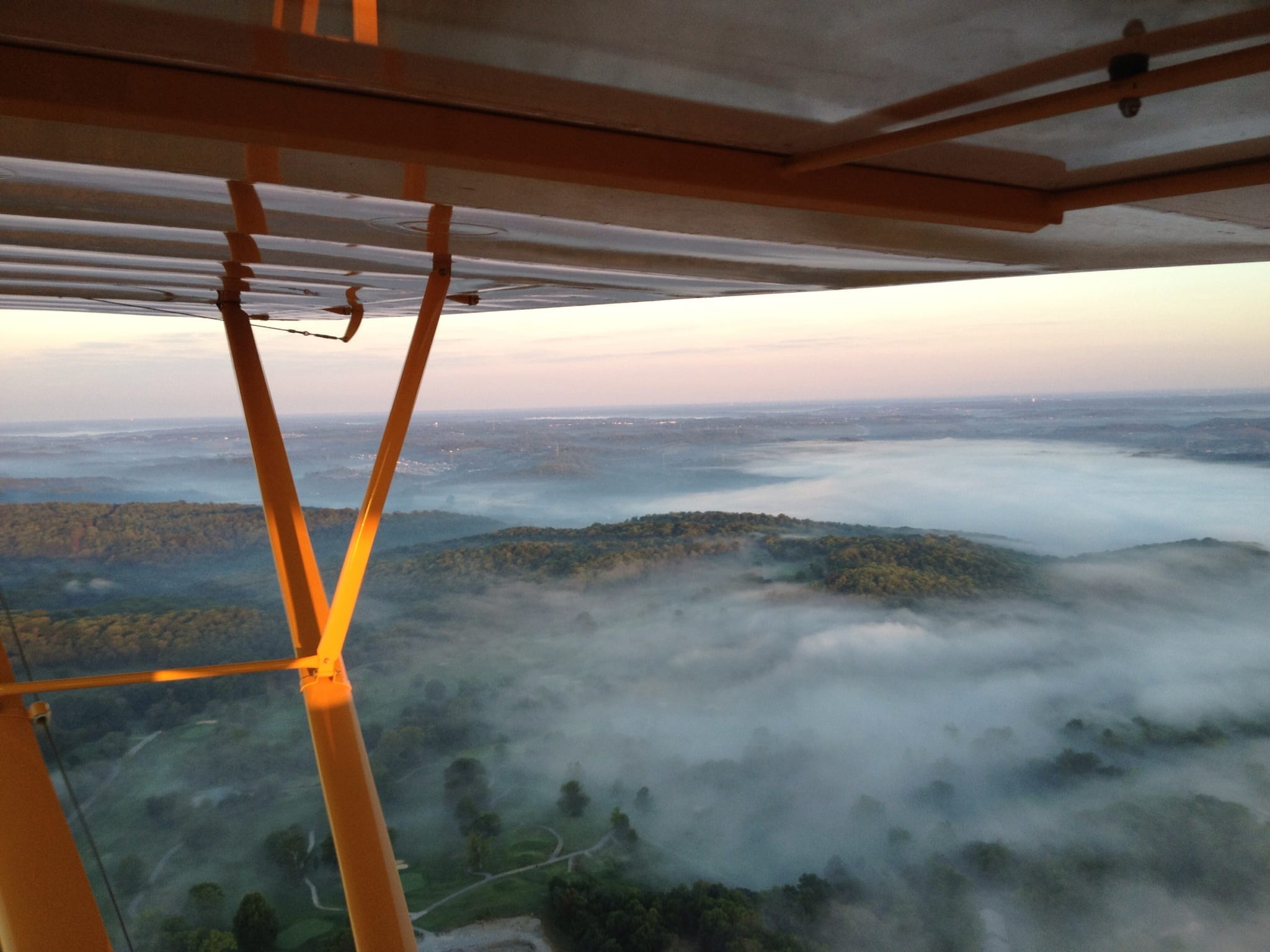 A great way to start the day–flying over the valley fog in a Cub.

I’ve been working at Sporty’s for over 10 years. It’s hard to get a group of pilots to agree to sit on the ground and answer other pilots’ questions all day without letting them go fly every now and then. About once a month, we are able to convince Hal that we need to test some of the latest products we’ve developed or see if that headset is really as good as they claim.

After all, Sporty’s doesn’t sell anything we don’t test first. The only way to test most products is by flying with them. We often use the opportunity to go grab breakfast at a neighboring airport, so I’ve become a connoisseur of the standard meal: Biscuits and Gravy. For all you who have not had the pleasure yet, you take two warm, flaky, buttermilk biscuits, split them in half, and cover them with white sausage gravy. The best gravy is so thick you can eat it with a pitchfork.

Departing Sporty’s and taking off on Runway 22 at Clermont County Airport puts you in the perfect position to be on top the valley fog as the earth falls away from the end of the runway. Today’s destination lies up the Ohio River in Portsmouth, Ohio (PMH), not because of their 5000-foot runway or friendly waitresses, but rather the route we often take to get there. You see, Sporty’s airport lies at 840 feet MSL, while the river is down around 450 feet. The only hills in our corner of the state are mainly due to erosion.

So “flying the river” means we can get a little lower than usual and enjoy some valley flying. It’s not rare to see a thick layer of fog on top of the river. With many of the smoke stacks from the coal plants billowing over 600 feet, it can be quite a sight. I often find myself wondering what the locals think when they see three aircraft that look nothing alike flying along in a horrible V-formation.

Our squadron is usually anywhere between two and five aircraft. Pilots, enthusiasts, first-timers…all are welcome. Early morning departures are a must, for we still have a full day of work to get in once we get back. As the sun peeks up over the horizon, the planes are in the air and beginning to rendezvous.

The type of planes are different every time. We’ve had Cessna 172s, a Skycatcher, an R44, a Citabria, a Cirrus, a Pacer, and even a Cub. Once in the same vicinity, we hook up in a loose formation (one that would make most warbird pilots roll on the ground laughing) and start meandering our way upstream. The taildragger and helicopter pilots always claim a service ceiling of less than 1000 feet AGL, so low and slow is the only way to go.

The airport diner favorite–Biscuits and Gravy.

Undoubtedly on 123.45, the pilot chatter starts up. If you don’t have thick skin and witty comebacks, you’ll become an easy target. Everybody has an opinion about Tom’s freshly waxed bird, and if his wife really knows what those headsets cost. Did Kurt bring his flaps back up this time? Your gear looks a little low. I think your rudder is on upside down. My yaw damper must be broken. And don’t forget every Airplane (Surely, you can’t be serious) and Top Gun (I feel the NEED) movie quote you have ever heard. If you’re recording the open band, you’ll probably have a great late night show script by the time we’ve made the round trip.

Most airport diners have three things in common: friendly people, terrific food and cheap prices. It always amazes me the amount of money pilots will spend on fuel for the plane, but we always want to cheap out on fuel for ourselves. It’s hard to spend more than $6 at an airport cafe on a good breakfast. That’s the same cost as a 10 knot headwind. We’ll spend $120 in gas on a round trip to complain about spending $9.50 for a big burger and fries.

The return trip is usually not as rewarding. The sun is up, the valley fog starts to rise, the magic of flight fades slightly. Our new destination is still a lot of fun, but Sporty’s doesn’t sell Biscuits and Gravy. Back to Sporty’s to request permission for a fly by (the line guys don’t think it’s funny anymore). It won’t be long before we decide to make another run. Maybe this time we’ll hit Urbana (I74) for a buffalo burger at lunch time? Anyone want to meet us at 1500 feet over the river? 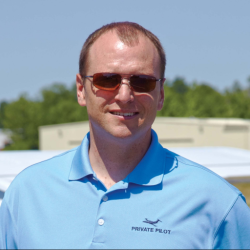 Doug Ranly
Doug grew up off the end of a runway and has wanted to fly before he could ride a bike. As the catalog manager for Sporty's Pilot Shop, he takes pride in developing products that make flying easier for pilots. After spending a short time in the military including a year in Iraq, his standards are abnormally high for pilot products. A private pilot with an instrument rating, he enjoys small prop planes more than any jet. You'll normally find him in a Cessna 172 or Skycatcher while on a mission to find the finest biscuits and gravy at an airport cafe.

A day in the life of the line