Blog - Latest News
You are here: Home1 / Article Archive2 / Weather Geek3 / A what? An exciting bit of weather action 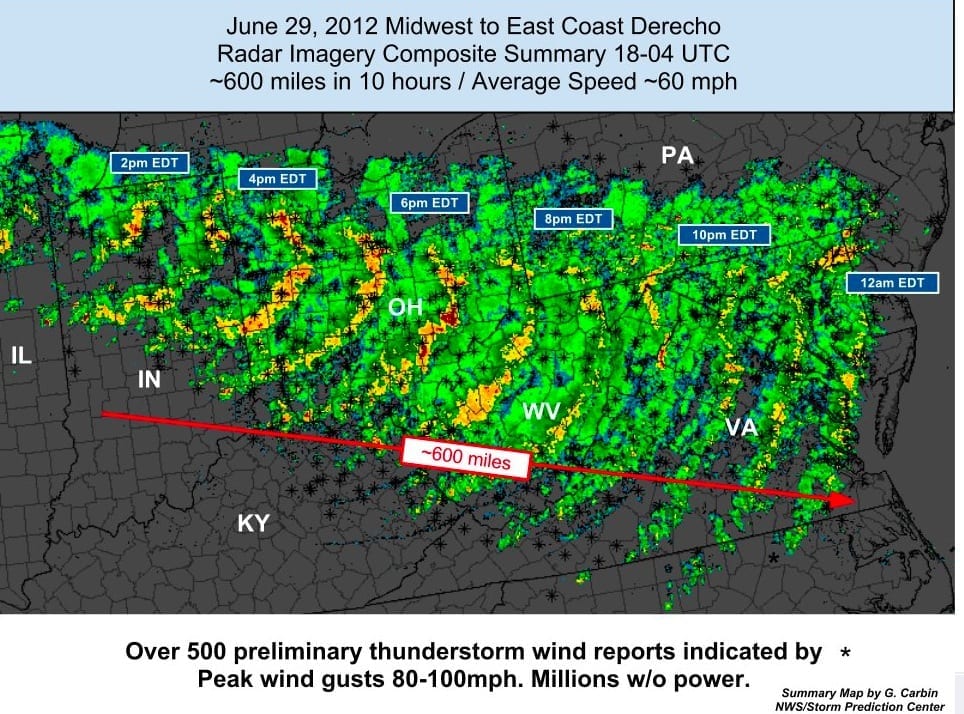 The derecho of June 29, 2012 was quite an event, as this radar compilation shows.

I don’t spend much time watching TV news but my wife keeps it playing at times. I kept overhearing a new word (to me) after the June 29th storm that turned out lights from the middle west to the East Coast. The word sounded to me like “deratio” but Wikipedia lists “de-ray-cho” as the correct pronunciation.

It is spelled “derecho” from Spanish for “straight,” and is a seldom-used meteorological term used to describe a long-lasting and severe squall line with quite strong straight line winds. The word is not often used because the events are relatively rare.

A brief definition says that it has to last six hours, cover 250 miles and have convection-induced surface winds of at least 50 knots to qualify as a derecho. The storm of June 29th beat that in spades.

According to an AccuWeather story, this storm raced 700 miles in 12 hours. Wind reports were numerous but one of the first was at Ft. Wayne, Indiana, at 91 mph and one of the last was 81 mph at Tuckerton, New Jersey about 12 hours later. Damage was especially bad in the Washington, D. C. metro area where hundreds of thousands were left without power for days.

When big storms like this rage, we usually lose some general aviation airplanes in serious weather accidents. Fortunately this didn’t happen on June 29th. There were probably some airplanes damaged on the ground but that only hurts financially.

If you want to be a weather geek for a few minutes, there is neat stuff available by checking “derecho” on Google. Some radar images are there and the appearance of these is such that nobody in their right mind would have even thought about trespassing in an airplane.

Had you ever heard of a derecho before?