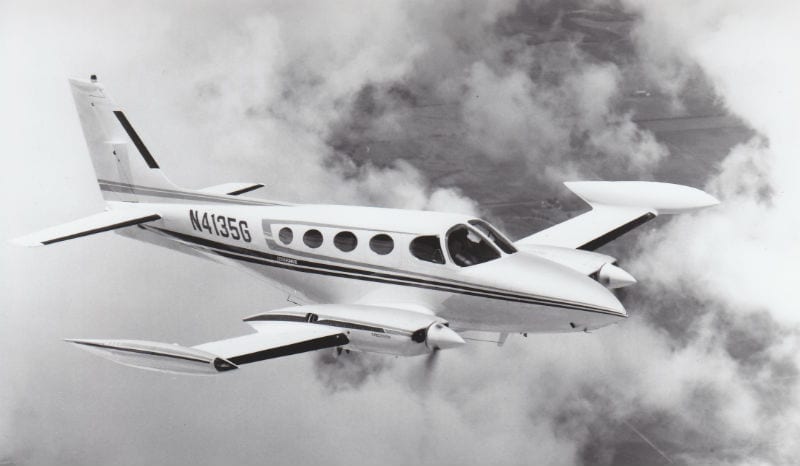 Pete Bedell’s recent article about the golden age of aviation sent me to my stack of old aviation magazines. Flipping through the December 1978 issue of Flying magazine, I couldn’t help but notice all the big, multi-engine airplanes: a Piper Aerostar on the cover, an ad for the Rockwell Commander 700 a few pages in and a Piper ad not for a Cherokee but for a Cheyenne.

“People wait to see who steps out” of a Beech Duke, according to the ad.

The most arresting ad, though, is the two page spread lauding the Beechcraft Duke. We don’t know the pilot, but we know he’s successful–after all, the cabin class twin says it all. As if there were any doubt, the headline declares, “People wait to see who steps out.” Indeed, the ad seems to be selling the airplane’s looks more than its performance numbers.

If it’s true that the ads in a magazine reveal as much about our culture as the articles–and I believe they do–then this ad sums up what most pilots thought the pinnacle of general aviation airplanes was in the glory days of the 1970s. In a market that was all about stepping-up from one class of airplane to the next, a cabin-class twin was the ultimate “step up.”

For any new or aspiring pilot, those big, beautiful Cessna 414s and Piper Navajos were the stuff of dreams. Two engines, retractable gear, an air stair door, a whole handful of throttle quadrant–even tip tanks! These beasts looked like a mini-Constellation.

These dreams became reality for a lot of pilots, with over 2,000 piston twins shipped every year between 1973 and 1979. Contrast those heady numbers with today’s–less than 70 piston twins were delivered in 2010. And try to find an ad for a twin engine airplane in today’s magazines. The piston twin is just about dead.

The reasons for this disappearance are certainly no mystery (and have been clearly explained by Richard Collins before). Some popular causes:

More than anything, the piston twin became a victim of our culture’s relentless pursuit of efficiency. An additional engine, just like elevator operators and flight engineers, didn’t provide the necessary return on investment–for the manufacturers or the owners.

It’s fast, but does it have personality?

So what? Four-course ranges are gone and nobody misses them.

Well I think the piston twin is worth mourning. Efficiency is great, but it usually comes at the cost of some character. And the older twins, especially the bigger ones, had real personalities. The Aerostar: brash pursuit of speed. The Duke: class, grace and swagger. Cessna 340: reliable and practical. What airplane you flew said a lot about what your priorities were as a pilot. There was also a refreshing variety of styles and technologies, and lots of new ideas at work.

Today’s airplanes are awfully similar, with the same engines, same construction and same avionics. Most non-pilots can’t tell a Corvalis from a Cirrus from a Diamond. They look like grown up kit planes (which of course they are), rather than mini-airliners. And the passengers certainly aren’t cradled in luxury the way they were in larger multi-engine airplanes of the ’70s.

Don’t get me wrong–there’s no doubt that a new Corvalis is a wonderful airplane, and is probably a lot safer than a twin for the average pilot. I would love to own one. But does it have the same ramp appeal as a Duke? Does it offer the same flying experience for a non-pilot that a Cessna 421 did? I wonder if we’ve lost just a little bit of the magic that GA used to have with those big, beautiful, inefficient twins.

The Great Debate: an accident waiting to happen
Scroll to top