Blog - Latest News
You are here: Home1 / Article Archive2 / I was there3 / Storm flying 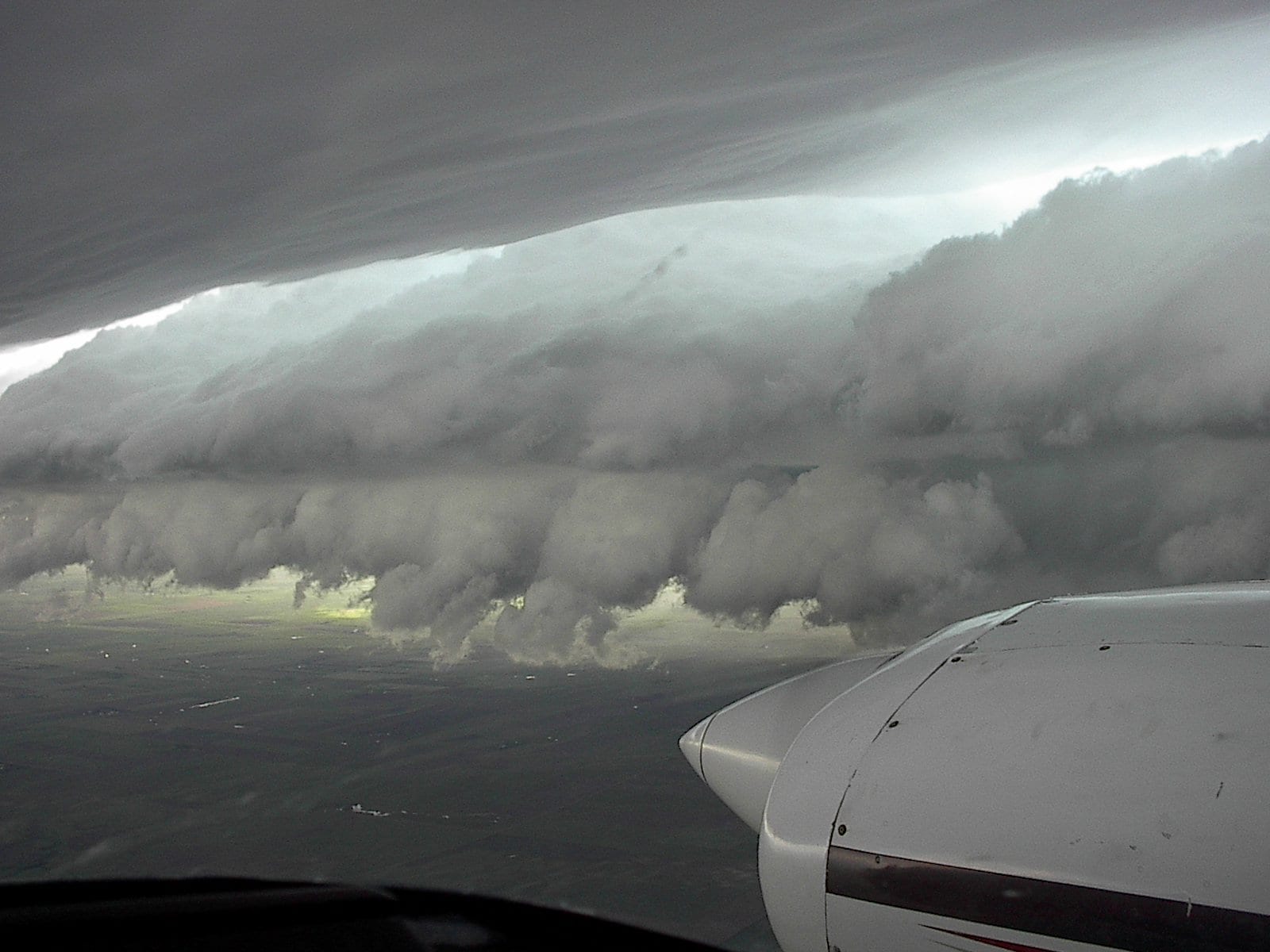 In Minot, North Dakota, where more than eleven thousand people are leaving town today, evacuating in response to the flooding Souris River, ancient and lethal B-52 bombers still rumble out of the airbase on training missions and patrol. Nuclear bombs are stored on site. From the airbase in Grand Forks, UAVs and drones leap into the sky west of town, their pilots learning the trick of flying an airplane remotely, while at the University of North Dakota students from all over the planet learn how to fly, the Dakota radio waves thick with the accents of their homelands. And up high, jets on their way to Minneapolis from Japan, Korea, Hawaii and Alaska throttle back and begin their descents over prairie wheat, canola, sunflowers and sugarbeets.

It is not a congested sky, but it is a complicated picture. And then there are storms. Big, fat, kick-your-ass storms in every season. Blizzards in winter. Straight-line wind storms in springtime and fall. Thunderstorms in summer. Thunderstorms with battlefield lightning, crop shredding hail and tornados. Sometimes the thunderstorms are dry and the lightning sets the prairie grass on fire. Sometimes the rain is so hard whole buildings go missing. If you are a pilot, and especially the pilot of a small airplane, you do anything to avoid these storms. The wind, the ice, the violence of the sky can shake you out of your wits and out of the sky.

Hans Ahlness makes his living flying into thunderstorms. He convinces other pilots to do the very same thing. He is the Vice President of Operations for Weather Modification, Inc, a part of the Fargo Jet Center, with clients in Antigua, Argentina, Australia, Burkina Faso, Canada, Greece, India, Indonesia, Jordan, Mali, Mexico, Morocco, Saudi Arabia, Senegal, Spain, Thailand, Turkey, the United Arab Emirates, and the United States.

“I grew up in the company,” he says. “Literally. I grew up in a town called Bowman, North Dakota, down in the southwest corner of the state—that’s where the company started—and I lived across the street from Wilbur Brewer, the owner. When I was a little airport rat, I used to ride my monkey bike out to the airport, and every time there was a storm I would ride out and watch the radar and watch the airplanes take off and land. So when I needed a summer job in high school I went to talk to Wilbur, figuring I’d be driving a grain truck or swather or something, and instead I became an assistant in the radar. I started doing that when I was sixteen, then I went to college and did all my flying and came back and flew in the summers. I’ve been full-time since 1985.”

Hans and I are sitting in the lounge outside the Weather Modification offices. I want to know what it’s like to fly into a thunderstorm. I’ve tried to arrange a ride, but there are a thousand good reasons—most of them having to do with law and FAA regulations—why I cannot score a seat. So I am asking for stories. I am asking about storms.

“When you learn to fly,” he says, “you’re taught to stay the heck away from them.”

Hans looks like a football player, a linebacker maybe, and he talks with his hands. Not wildly, but expressively—lifting and pointing and curving his words.

“Stay twenty miles away from cells. Don’t fly between them,” he continues. “And all that’s right. The weather gets bad around here. You get turbulence. You get wind shear. You get lower visibility from extra cloudiness or rain. You get windshields broken out due to hail. You can get hit by lightning. Doesn’t happen very often down low, but it can happen. Lots of bad stuff can happen around here. So what we have to do is teach our guys how to safely operate in the area in close to the storm, where you’re not supposed to be.”

“Is it technically difficult?” I ask. “Is it difficult to do the flying you do? I mean, the ride might do a number with your kidneys and spleen. But is the flying very hard?”

“Well,” he says drawing out the word. “Not so much. The most dangerous part is still the takeoff and landing. You’re down close to the ground and you’re flying around thunderstorms where there’s going to be shifting winds. Generally, the airplanes are going to be working in front of a thunderstorm, flying in front of it as it moves across. That’s where the inflow generally is. So say they’re low on fuel or they’re running out of chemical and they need to land to re-arm. And one of the spots for them to land is in front of the storm. In front of a storm you generally have a gust front. Or if it’s a front coming through, you have strong winds in front of the front. Either way, that’s a bad combination for landing. And the same thing for the back. If you’re going to duck through the storm, get beat up a little bit and then land behind the storm, there’s all the turbulence and downflows behind a storm as well. It’s like a ship just passed and the water’s rolling.”

Outside the windows of the lounge I can see a Super Cub start up and taxi toward takeoff. A student and instructor pull up in a Cessna 172. A regional jet takes off for a trip to Denver. The afternoon is low overcast but calm.

A nasty shelf cloud from the air. Photo courtesy of Dustin Reiners.

“One of your pilots,” I say, “has a picture of flying just level with a gust front.”

“Do you fly through that stuff?” I ask.

“At cloud base, we are always VFR. If we’re seeding the tops of the feeder cells, which is really just mid-level in the storm, we might fly through stuff. But not when we’re working the base. I’ve noticed the younger guys pick on bigger stuff, bigger feeder cells, than us older guys. And I understand. When I was younger, I’d fly into a cell that was already five or ten thousand feet above me and young-me would say, ‘Whew! That’s a good ride!’ Now, old-me knows I’m going to get my headset beat into the top of my head, and there’s already ice in there, and I’m probably going to run into hail, and it’s too big for what I want to do.”

“Walk me through a normal flight,” I ask. “I mean, it’s not like you’re a fireman. The alarm bell doesn’t go off and you don’t go sliding down poles and you don’t turn on the sirens and flashing lights. But this is pretty on-call stuff. If you’re going to seed a thunderstorm, those can build pretty fast.”

“Let’s just talk North Dakota,” he says. “There are two radars out in the western part of the state. Both are owned by the state and both are operated by state meteorologists. All our airplanes and pilots are based out near there. Bowman, Williston, Watford City, Stanley and Kenmare and Minot. Everybody’s always on-call weather-watch. If there are storms growing in Montana, we’re watching them. Depending on the forecast you might be on stand-by or alert. Alert means you’re sitting at the airport ready to go. Now radar doesn’t see a thunderstorm until it already has rain in it. Radar sees precipitation, not clouds. And if we’re dealing with a hailstorm, which grows fast, by the time the radar sees it, it may be past the point where we can work. So a lot of the stuff that we’re flying in isn’t going to be on the ground-based radar. So you need to be there before you’re needed—that kind of thing.”

“The state guys are looking at the radar and at satellite pictures, and we’re watching and we see cumulus growing. So they call me or I call them. Either way. We pre-flighted the airplane after its last flight, so it’s always ready to go. And then away we go. We’re going to fly to where the area of new growth is, which is generally on the south side. And lots of times on the southeast side of the storm you’ll see a shelf cloud. You’re looking for a smooth flat base. You don’t want to be in the rain shaft. You’ve got to be out in front of it. And you don’t want to be underneath the shelf cloud because that’s a shear zone. Generally there’s another base above the shelf cloud, and you want to work the edges out in front of that. That’s where the inflow is. You want an inflow of 500 to 800 feet a minute, because in the eight to ten minutes it takes for your chemicals to become active, those fake ice crystals get up into the area of the storm where there is supercooled liquid water, which will cause it all to make more ice crystals and rain out earlier than it would have otherwise.”

Hans pauses, hands in his lap.

“Every storm is different,” he says. “But you’ve seen it from the ground. A big hail storm is coming and it’s green. Deep green. Well, when you’re flying right next to it, that green color, which we always figure is bad because it means there’s a crapload of water and ice in there, is just crystal clear. There’s no dust. No trees or anything. No pollution. The colors are just intensified. And the lightning—you get a good show with that. Sometimes, at night—I can remember flying a really big storm one night out of Bowman. Huge cells. Big shelf cloud. I was out in front to the east. Ten mile wide flat base. And it was just like a concrete deck above me it was so flat. And there was so much lightning coming out of it we’d duck inside the airplane. You don’t hear thunder inside an airplane unless it’s close, and we were hearing thunder all the time. It was like they were shooting at us, almost. It gets your attention. Then it started hailing and we had to bail out of that area. But everything was so sharply defined.

“There was another storm—about two in the morning but so much lightning it was just like daytime. There was a tornado out of that one. The guys working the ground radar bailed out and went to someone’s basement in town. It was so intense. There was no dome over the radar and the dish wouldn’t turn in the wind, so they were blind anyway. Every feeder we went into, the updrafts were so severe the storm would literally just throw us back out. We’d come out of the cell in a 90 degree toss. Not in a turn. Not at a bank or anything. We were just thrown that direction out of the cell. And you get to where you think you don’t want to do that again! That was the roughest beating I’d ever taken.” 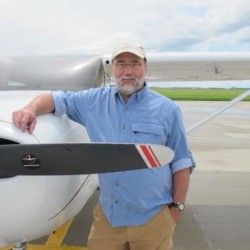 Leaving a legacy that changes lives
Scroll to top