There is a lot of discussion about the state of GA, whether we are in decline or at the beginning of a renaissance. Briefly setting this ever tempting discussion aside, I’ll propose we are in an intermission: at nearly a million strong in the 1980s, active pilots halved a decade later; now, we are told, there’s been an increase every year since 2016. Somewhere between the GI Bill of our grandparents and the innovations in flight tech that are bringing our kids (and all ages) back to flight, we drift.

I work in venture capital, which means that by definition I bet on the future. I also fly to work, in a plane that was built on little more than 1950s technology. My days are spent with companies working on the future of air taxi, heavy lift autonomous flight, and even helicopters flown by amateurs off iPads. We have a motto—“The Future is Broken, Let’s Fix It”—so rather than wonder if GA is in a renaissance, I tell my kids we are straddling two great generations, the second of which will be theirs.

Both inside and outside of my professional life, I see a high correlation between people who fly and people who build things. I myself am no builder. I push paper. But type in “founder + pilot” into Linkedin and the results are in the thousands. Personally I use aviation both to commute and as a conversation starter. The plane, for me, is a kind of calling card.

Disconnecting in an over-connected world 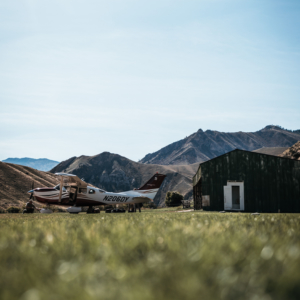 Grass runways have a way of encouraging disconnection from the outside world.

I spend my summers flying off a grass airstrip in Idaho. This is a forced disconnect to my life in tech, which often amounts to feeling disconnected in an overly connected world. Our town in the Sawtooth mountains, population 62, is the last stop before The River of No Return Wilderness, a roadless area unmatched until Alaska to the north and maybe the Amazon to the south. The only way through it is to float or fly. We have over 200 airstrips.

Our airstrip sits on a bench above the confluence of two rivers, which join to make the longest salmon run in the country, nearly 900 miles long. From my cabin building site I look upon a thin line of wings perched next to a typical Western-front town of dirt streets and pick-up trucks. This provides a feeling of being connected to something larger. Our planes deliver guides, sportsmen, miners, and even “fly the mails.” We have a flying pastor and most ranchers are pilots. My grandfather, my mother, and many of my cousins are all pilots. The GI Bill of WWII produced a generation of them, and rivers like the Columbia and Snake, which our river flows into, allowed us to smelt so much aluminum through cheap hydropower that historians say we simply out-produced the Axis powers with planes.

And similarly, in the new economy, America is now awash in information. We are not building so much as writing. Writing code, software, and social media. This is not enough. But when combined with 3D printing, advances in material sciences, and energy storage, we might find that humans are removed from flight altogether. And this, I would argue, is too much.

Such are the ruminations of a knowledge worker straddling not just two generations but two geographies. When not in Idaho, which is most of the time, I fly off an airstrip just a few miles north of the Big Sur coast. A quiet coastal community, by air only 19 minutes to Palo Alto —which by contrast is the busiest and shortest towered airport in the country. I pass through nine air traffic controllers, including Moffett Field, whose Hangar One is one of the largest free standing structures in the world. It was built as a defense against the Japanese (some say our wicked fog) but now it houses NASA and Google-related flight operations. The irony of flying a piston plane into a place rebranded “The Silicon Valley” is not lost on me — a valley I knew as a kid for summer jobs in the apricot orchards, or ‘cots as we called them.

I don’t commute listening to podcasts and I don’t text while I fly. I just feel lucky to be above the parts of our future that will probably never be fixed, namely Bay Area traffic. The plane is both an end and a means.

My job as a connector of sorts means I think a lot about the difference between connection and connections. This is where the first generation stands out so much. Before we had eight billion people on the planet, it was easier to have (and perhaps offer) connections. Maybe it actually meant something. How or what you served, what school you went to, or being a GE executive or part of the “HP way.” Careers were more stable, our lives less mobile. To over index on any of these is a mistake (especially school) but I would argue we were better known by our friends, certainly more than our Instagram profiles today would suggest. 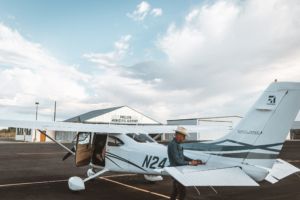 An airplane can help you connect or disconnect—it’s up to the pilot.

By contrast, this current generation is obsessed with connection. Because connection sells. Offer a product or a service that provides it, and you are tapping into a neurobiological need that runs directly to our amygdala. Its location so deep in our brains is an indication of its importance. It also says a lot about how primates’ brains evolved. Just as rejection from the clan was death, today we are bombarded by constant triggers to be liked, seen or connected with in a way that not having them leads to depression and isolation. A kind of modern day death.

Cartographers of the next generation

How does all this relate to aviation? As GA sits at some kind of crossroads, between a great generation of builders and a rising generation of innovators, today’s pilots are connectors. We are a link from the past to the future. Even on an anecdotal basis, most readers of Air Facts will agree: aviation is the greatest of conversation starters. Tell someone you’re a pilot, and the questions start flowing. “How long does it take to learn?” — they are always shocked at 40 hours — and “Is it safe?” More often than not, telling someone you’re a pilot or that you were late for a meeting because of weather is met with joy and the instant rejoinder, “I have always wanted to learn to fly!”

A renaissance or a retreat?

Needless to say I fall in the camp that believe GA is in a renaissance. The aforementioned company modifying helicopters to fly off iPads has smartly focused, for now, on just being a layer of safety. We refer to this as “human-augmented intelligence,” building tools that allow humans to make better decisions. Deep Blue may have beat Kasparov, but hand any amateur chess player a piece of technology with little more than what’s in a cell phone and they can beat the world’s fastest computers. Humans are actually pretty good at pattern recognition. We just can’t do it at scale, and can’t do it all the time.

Working remotely, or having so much computing power in our hands, for better or worse, now means we can. But we must be aware of the longview. It took two world wars to produce modern flight and smelt aluminum. The cycles now appear to be shortening. Materials and computing are coming together at astonishing speed. The point is that something is afoot, even if it feels we are adrift. The next generation of cartographers are taking flight lessons. They will become builders. And hopefully they won’t forget how they got there. Peterson Conway
Peterson Conway flies his X-Cub among the 800+ airstrips in the backcountry of Idaho, and during the winter, along the central coast of California. He learned to fly as a cure to heartbreak at a young age, finding the views aloft a balm to the confusion of growing up. He was turned on to aviation thanks to an influential uncle, who happened to also be the lead engineer on Boeing's 737, and who insisted that “no matter what happens, always first fly the plane.”

To flap… or not to flap?
Scroll to top