Blog - Latest News
You are here: Home1 / Article Archive2 / I was there3 / A rushed preflight leads to a terrifying discovery

In the mid-70s I was a T-38 flight training instructor at Webb Air Force Base in West Texas. As a new guy, my first cross country with a student was flown with a more experienced instructor pilot (my “buddy” IP) and his student, to the same destinations.

Our launch time was in the afternoon with typical thunderstorms in the forecast. We launched, and instead of heading directly west to our destination, El Paso, Texas, we headed north to get around the forming line of storms and then turned west.

As we traveled west, I continued to climb to top the storms and soon found myself approaching FL 450. Up ahead, I could see areas where something was projecting above the storms. Then I realized the updrafts were spitting hail out of the clouds. Wow! So I took the airplane from my student and began diverting around those areas. 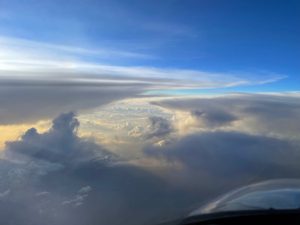 My buddy IP was miles ahead of me and he told me there was a large opening in the storm line and gave me a Tacan range and distance. I coordinated with ATC, did a point to point navigation calculation on the HSI, and headed that direction. Soon enough, I could see the ground 45,000 feet below me but the opening was getting smaller by the minute.

I soon realized that at FL 450, the indicated airspeed was well below gear speed. So down went the gear and flaps, and out went the speed brakes. I rolled to 60+ degrees of bank and began a large circle with controlled airspeed and a huge rate of descent.

Around and around we went and soon we were below the 6000 ft. foot broken ceiling at El Paso. I cancelled IFR and headed for the airport. But wait, where exactly was the airport? Soon the tower queried me and asked where I was headed. Instead of fessing up, I simply transmitted, “Student training in progress.” That time, it meant me!

We corrected our heading, landed, did our post-landing checks and taxied to our military operations building for next leg flight planning and fuel.

My buddy IP was already being refueled and he said we needed to hurry and take off before the next squall line approaching from the west was over El Paso. He started engines, taxied, and took off with an afterburner climb to top the approaching weather, and headed west to California, our next destination.

I directed my student to strap in, told him that we needed to hurry, and I did a very quick walk around once we were refueled. I strapped into the back seat, and told my student I was ready for engine start. As soon as he had both engines running, I picked up our IFR clearance, called ground, and requested taxi and and an afterburner climb. I kept looking at the approaching weather, making certain I had a plan and a backup plan in place for what was occurring.

We had a long taxi and as we approached the runway I contacted tower, confirmed the afterburner climb, and got takeoff clearance. My student taxied onto the runway, held the brakes, and ran up the engines to military power (without burner). The right engine generator failed, crossover relay failed, and the master caution light illuminated. I pressed the master caution to reset it, and instructed my student to reset the right generator since that could only be done from the front seat. He did so, and immediately it failed again and my master caution light illuminated. We were whipped. We could only reset the generator one time. With no crossover so the left generator could charge the battery, it would would run down quickly.

I took the airplane, pulled the throttles to idle, coordinated exiting the runway and began a long taxi back to parking. I also began thinking about where I could obtain some maintenance, how to protect the airplane if there was any hail in the approaching storm, and how to let my buddy IP know that I broke down in El Paso.

Then I asked my student to run the after landing checklist. When it can to the “Insert ejection seat safety pins” step, I reached down to grab them out of the stowage case and they weren’t there. They were still in the ejection seat so it was safetied and would not have functioned if I needed it.

That really got my attention! I thought back over the decisions I made and realized that I let an unfamiliar airport, weather, and “hurry up” from a more experienced instructor interfere with proper checklist discipline. Frankly, it scared me terribly. 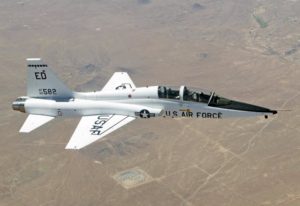 The checklist is no less important just because you’re in a hurry.

I vowed at that moment, I would never let anything, or anyone, hurry me in an airplane. I have maintained that discipline through 40 years of flying. Turns out it saved me another time in my military career. Most importantly, I made certain every student I trained understood and learned from my mistakes.

The next morning we were ordered to proceed to Williams AFB in Phoenix, Arizona, for maintenance. It was a crystal clear day with calm winds. I filed an IFR flight plan and then called ATC and told them that if I lost my generator again after takeoff, I would turn the battery off, disappear from radar and would be going VFR to Williams. I asked them to call Williams and just let them know I would show up there and give them a call on the radio within 50 miles of the airport.

I assembled VFR charts and made myself a flip chart to Phoenix. Fueled, up, briefed, coordinated with the maintainers and my supervisor of flying, I was good to go. Run up, ops normal. Brake release. Good burner light. Gear up. Flaps up. Master caution illuminated, bad right generator and no crossover. Perfect.

This time, I had a good plan. As briefed, my student turned off the battery switch and I just navigated, flying along on a beautiful day. Then I started laughing out loud.

Here I am a highly trained military pilot, flying along like a no electrical system Piper Cub following the interstate highways to Phoenix. I was going faster, but it was much the same experience.

The plan worked perfectly for a safe landing at Williams. Transient maintenance changed the crossover relay and ops check was normal for a departure the next day. I never did re-connect with my buddy IP, but I got all of my student’s syllabus training items completed. In fact, he and I even learned a few things together that weren’t on the syllabus for that flight sequence. Ron Frederiksen
Ron learned to fly through the ROTC program in his senior year of college. He graduated from USAF pilot training in the mid070s and became an instructor pilot at Webb AFB, teaching foreign students until the base closed. Then it was off to Fairchild AFB in the ACE program, where we flew the T-38 and then the T-37 with B-52 and KC-135 co-pilots. He left the military and ended up purchasing a business where he has worked for the last 40+ years. After leaving the Air Force, he didn’t fly for 18 years. His father contracted cancer, and lived only six months; during their long conversations, he made Ron promise to begin flying again. After he passed, Ron bought a 1964 Cessna 182 and flew that for 20 years, then purchased an RV7A—which he is very much enjoying. Ron loves flying aerobatics and formation as well as taking cross country trips in the 7A.