Blog - Latest News
You are here: Home1 / Article Archive2 / I was there3 / What are the odds? An electrical failure at night 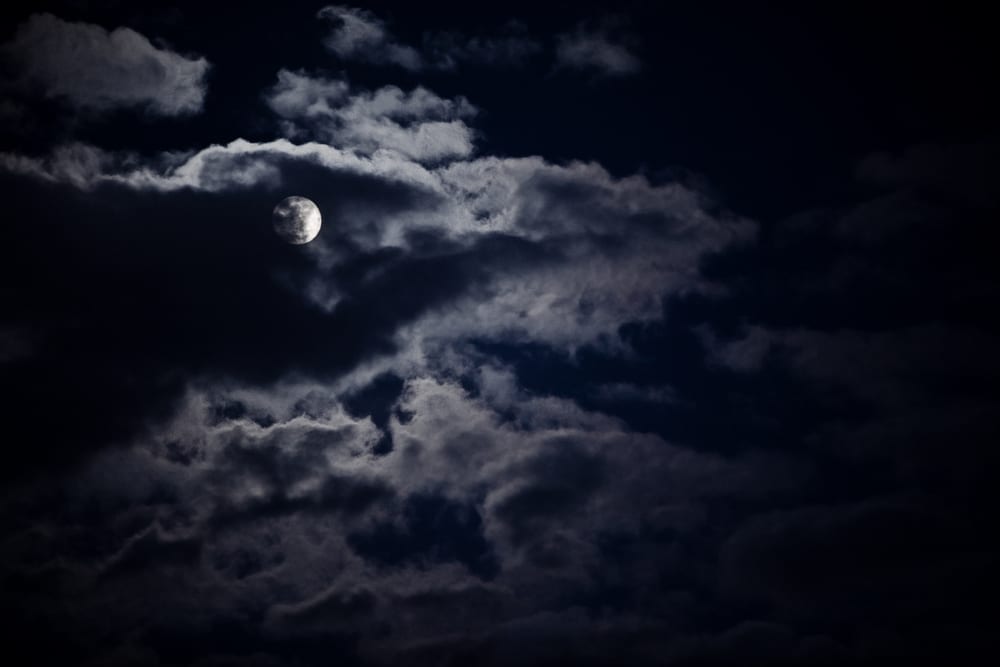 It was 1985, about a week after ferrying my 1961 Mooney M20B from Waco back to Dallas. It was in Waco for a new engine and propeller. I complained to the mechanic in Waco that I had a new battery when I left my airplane there for the overhaul, but the one installed appeared to be old. He said it was a good battery, and the only one he had in the shop, so I had no choice but to accept it and leave.

One of my favorite monthly flights for a decade was to San Angelo, Texas, to visit one of my best friends. We became friends during my college years when he was a drummer in a traveling rock band out of West Texas and I was the DJ at a popular disco in Dallas. Retired from his days in the band and perpetually on the road, he was now a successful barber in San Angelo. I would fly down for the weekend, get a free haircut, and then spend a day or two while we cut-up like mischievous kids when not deer hunting, playing golf, or shooting trap. 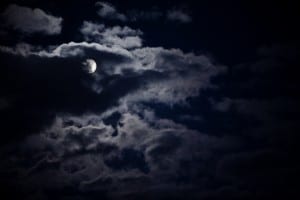 Night can get pretty dark over West Texas.

I was only a VFR pilot, so on this Friday evening after work, I needed to wait for a thunderstorm to clear before departure. Once my flight path was clear, I departed Dallas Love Field (DAL) for San Angelo Mathis Field (SJT). It was dark shortly after takeoff and the visibility was hazy following the storm, especially over the vast expanse of sparsely populated, unlit farm country between Dallas and San Angelo. I always loved flying at night and found navigating after dark easy, especially locating city lights and airports because of the rotating beacons one could see from miles away.

My routine for that flight was to contact Mathis Tower inbound from about 40 miles east and announce my intentions to land there. I was squawking VFR on my transponder, so they could see me, but after departing the DFW area I seldom communicated with anyone else until just before my arrival to San Angelo. Because it gradually became dark in-flight, I did not notice the instrument lights in the cockpit were less than full bright.

When at my usual 40-mile check-in distance, and still over farmland, it was time to contact Mathis tower. As I depressed the microphone button, the lighted LED frequency numbers on my comm radio immediately dimmed and started to scramble to different numbers off frequency. I reset the frequency and tried again. Same result. I was unable to communicate because I did not have enough electrical power.

Because the magnetos would continue to power the engine without additional electrical power, while mentally cursing the Waco mechanic who misplaced my new battery when he reinstalled my newly rebuilt engine and propeller, I cut my master switch to preserve what little battery power I had left. Without any further battery drain, the battery might cool after a while and increase in voltage enough to communicate again.

I reached for my flashlight attached just above the pilot side window. It was the kind that had a push-button switch in the end opposite the light’s lens. Gripping it with my right hand, holding it to the right side of my head while pointing it toward the panel, I reached for the button on the end with my thumb. I fully depressed it and released it by sliding my thumb off the button. As soon as my thumb was clear, the push-button switch cap, immediately followed by the batteries, all flew over my right shoulder, landing somewhere behind the front seats.

This was my first cross-country flight since losing my engine at about 11,000 feet just north of Waco, successfully landing without incident in a field, and why the rebuilt engine and prop replacement was in Waco. Now, after that major incident, I found myself alone in the dark, at night without lights or flashlight, no navigation instruments or visible compass, and no way to communicate. I also had no autopilot, so there was no way I could leave the pilot seat to search for the flashlight components ejected over my shoulder into the back of the airplane. Since both incidents are extremely rare, I briefly thought, What are the odds? and, Why me? (Or, in other words, Whiskey, Tango, Foxtrot?!).

Without a flashlight or any lights in the cockpit, and with no moon or visible stars, it was pitch-black. I could only see the occasional farm light looking straight down. No city lights were within site, and with no reason to turn, I tried to hold my heading and altitude in the dark without any navigational aids. I thought if I could see the start of ground lights increasing in frequency, they would have to be coming from a city. And, if that city were San Angelo, I might be able to find what I always saw to the right of my flightpath from previous trips.

The government closed Goodfellow Air Force Base a long time ago, but it was still there with three wide and exceptionally long, intersecting runways. There was a big white “X” on all the runway numbers but no other obstructions. This was an emergency, so I had no reservations about landing there or anywhere else I could safely put down. 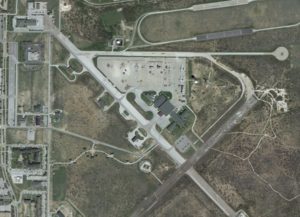 Even though the runways are closed, Goodfellow Air Force Base makes a helpful landmark.

Determined to prevail and confident (with no good reason other than my innate will to survive and normal approach to solving problems), I held the course. Finally, after what seemed longer than it was, I finally started to see an increase in ground lights. My first thought was Thank God! Luck does favor the prepared mind (according to Louis Pasteur), but there was no sight of Goodfellow Air Force Base in any direction.

Now over what I hoped was San Angelo, I quickly descended to what felt like 1000 ft. AGL to ensure clearance of any ground obstructions and increase my opportunity to capitalize on a landing opportunity. My normal approach to Mathis Field in San Angelo approaching from the east was to fly over a large green water tower in the middle of a densely populated residential area. It was the landmark the control tower always told me to use. They would instruct a 90-degree left turn over the green water tower for a straight-in to Mathis. Confident I was past Goodfellow Air Force Base, and with no reason to turn, I continued to fly straight and look for paved highways or other suitable landing sites.

A few minutes later, just ahead of me and far to my left, I spotted the required FAA warning lights that resembled the shape of a water tower. I turned toward them and gradually recognized a beautiful big familiar sight: the green water tower. When I was abeam with it I made a left turn. Soon after flying over the water tower, I could see the rotating green and white beacon from Mathis Field in the distance. Not only did a find a place to land, but it was also miraculously my destination airport.

Once I could see runway lights, I turned my master switch back on. Now able see inside the cockpit, I immediately pulled all breakers to the off position except one comm radio, an old Narco. I kept it as a back-up when I updated all other equipment in my panel. It was not a digital LED display and would stay on the frequency dialed into it. I tuned it to the Mathis tower frequency. I hit the mic button, hoping there was now enough power from the battery to transmit, but I was determined to land there with or without communication. I quickly announced I was in-bound on a short final. As soon as my thumb left the mic button, the tower immediately responded with that wonderful three little word phrase, “Cleared to land.”

I safely landed without a headlight, navigation lights, or strobe. I contacted the tower after parking at a familiar FBO. I thanked them for clearing me to land so quickly, especially since I had not previously been in contact. They told me they saw my transponder signal disappear and anticipated I was having electrical trouble, so they continued to watch my approach blip and expected my arrival. It is great to have dedicated professionals who help make flying safe for the general aviation pilot community.

I asked the FBO in San Angelo to bring in a mechanic to check out my electrical problem that weekend. The mechanic replaced my old battery with a new one for $250 and told me I was good to go that Sunday for my return flight to Dallas. Unfortunately, he was wrong.

It turned out not to be the battery. I had the same electrical power loss experience on my return to Dallas. It was daylight, so no issues navigating. The return flight was always shorter due to tailwinds, and a new battery for this leg of the trip may have also helped. I repeated the same steps that worked the first time. I killed the master switch and all breakers, like on my previous flight, and repeated my last-minute arrival procedures using my old Narco comm radio to safely communicate my return to Dallas through landing.

It was later determined my alternator was defective. By not producing enough electricity, it caused an excessive drain on my battery in-flight. For several years after, I continued to fly to San Angelo and visit my friend for free haircuts and more great times. The love of flying endures.

Like in all of life’s experiences, unexpected things can happen. Whether in business, games, sports, or flying, the key to increasing the probability of success is to remain calm and never quit until it is over. Like I told my daughter when she was learning to drive, and it applies to flying, “Drive like your life depends on it—because it does.” Al Cercone
Al learned to fly in college but took a break after graduation. In the early 80s, he bought a Mooney and flew for business and pleasure for over a decade. In 2007 he discovered the Civil Air Patrol, a wonderful organization of volunteer pilots and ground crew all working to locate downed aircraft, providing disaster relief, aiding the US Air Force, and educating cadets (under age 18) about flying, aerospace, search and rescue, responsibility, discipline, professionalism, communications, and helping others. He is a Captain for the Dallas Composite Squadron.

Tales from the doc side
Scroll to top