Editor’s note: This article was award second prize in the fourth annual Richard Collins Writing Prize for Young Pilots. After reading over 70 entries, our distinguished panel of judges (including Richard’s son) selected Gus Steffen as the winner of the $2,500 runner up award. We hope you’ll agree that this article is a fine tribute to a great writer and pilot.

I was nervous, but I was ready. It was time. I had been training for this since I got the Pilot’s Handbook of Aeronautical Knowledge for Christmas two years earlier. I slept restlessly the night before my flight, only to learn the rental trainer was down for a week of maintenance. Something outside of my control had canceled my first solo.

So many days followed that pattern closely. I would hope and plan for the perfect day, but the wind or clouds would decide otherwise. Every setback eroded my optimism, leaving me with the glum sense that the day would never come. Finally, on the morning of August 10, 2021, the forecast indicated that there could be a small window of mostly clear skies before the wind picked up. The opening provided about an hour of flyable weather and a sliver of hope. I wondered, Could this be the day? Despite my expectation of yet another disappointment, I decided to go to the airport.

My CFI, Tyler, greeted me when I arrived. “Did you get a weather briefing, Gus?”

Anxiously, I relayed the details of the weather: “I think it’s going to be decent, but we’ll have to keep an eye on the wind.” 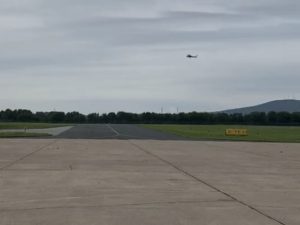 The airplane does climb faster without a CFI.

“I agree, but it isn’t going to stay good for long. There’re also some low clouds nearby to watch out for. I’ll help you with the preflight, so we don’t run out of time.”

We continued talking about the flight and walked outside for the preflight inspection. My eyes squinted at the glare on the apron as we went through the squeaky gate near the fuel pumps. Sunlight and patches of blue sky peeked through the layers of cirrus and stratus clouds. My excitement started rising, but I remained guarded with low expectations. We strode across the apron to the trainer: a worn Cessna 150 that had served a multitude of pilots before me. I dove into a thorough preflight to ensure the 48-year-old aircraft was ready for a safe flight. Anticipation building, I climbed in side-by-side with Tyler and cranked the airplane to life.

After twisting my headset’s mic in front of my mouth, I asked, “Can you hear me?”

“Loud and clear,” Tyler replied. I tuned the radio to the ASOS so I could check the weather one last time. Good to go.

For three traffic patterns, Tyler stayed off the controls. He unstrapped his kneeboard and told me to taxi back to the apron. Once he unbuckled his shoulder harness he asked, “You ready to go solo?”

I took a moment before replying. It had been so long, but nature was finally cooperating. This is for real now! I was still nervous, but I knew I could do it: “Yep, I’m ready.”

Tyler must have sensed my hesitation. “You don’t have to fly today, you know. Don’t feel pressured into this; the decision is up to you.”

“Good luck, then,” Tyler replied. “You’re a good pilot. I have confidence in you.” On his way out, he added: “Have fun! The 150 is going to take off like a rocket without me weighing you down.”

Then he was gone. My instructor and source of help in a crisis was missing, replaced by an empty red chair. From there, every decision was mine. Every move the plane would make was mine to dictate, for success or catastrophe. I was the pilot in command. My feet trembled on the rudder pedals, but I wasn’t turning back.

With the airplane running again, I listened to the weather station apprehensively and started taxiing. I paused briefly for the run-up. Everything is still under control. Finally, I rolled onto the runway. I took a deep breath and stared at the runway numbers. It was the moment all my training had prepared me for. I made the final commitment to the flight and eased the throttle to full. My heart raced as I shot down the runway. The airspeed crept up, and I left the ground behind. I was ecstatic. The 150 really does climb like a rocket! I held the reigns of a flying machine in my own two hands, and all four cylinders of its Continental engine worked for me alone. In my mind, I had conquered the sky.

I made a climbing turn to crosswind and leveled out precisely at pattern altitude for downwind. Pressing the mic switch confidently, I made my much-rehearsed radio call: “Wausau traffic, Cessna one one four five four, downwind for runway one three, Wausau.” I smiled to myself, taking a moment to enjoy the view. Rib Mountain, the biggest hill in Wisconsin, stood to my left, with downtown Wausau spread out on my right. Hundreds of cars dotted the highways that crossed over and under each other. The world on the ground was crowded and bustling with life, but I was soaring high above it all, alone in the sky.

I turned my focus back to the flight and ran through the downwind checklist. It wasn’t long before I made the turn to final. I lined up with the runway and did my best to hold airspeed. The runway filled the windshield, and my wheels touched pavement. I was a little fast, so I bounced into the air again before settling down. Success.

“Does that count as two landings?” I asked jokingly.

I back-taxied for lap two of three in the pattern. Right after takeoff, a gust of wind rocked the wings and my courage. What if the wind picked up and I’m not able to land? To my relief, it was over shortly. I calmed down and resumed normal breathing. After that, the pattern went smoothly—up until the base leg. On that last turn before final, I encountered one of my greatest fears. It wasn’t engine trouble. It wasn’t a turn in the weather. Instead, it was a scenario I had never even thought of practicing. 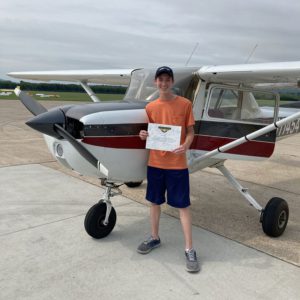 Celebrating a first solo with a little extra challenge.

I suffer from cnidophobia. Bugs with stingers are not my friends. When I meet one, I run. I didn’t have that option when a wasp appeared in the cockpit on that second lap. However, my consistent training had ingrained something new into my instincts: fly the airplane. Even with the black and yellow menace buzzing around me, I kept a cool head and focused on that task. I rounded the corner from base to final, made the usual radio call, and flew the 150 safely to the ground.

Still unrattled, I back-taxied for one last lap in the pattern. The wasp started crawling across the windshield, but I didn’t want to slap it with my bare hand. I looked around the cockpit for a possible weapon, settling on my checklist. I carefully positioned my thumb on the paper and vanquished my foe. Threat neutralized, I took off once more, proud of overcoming setbacks, nature, and fear.

My last pattern went perfectly until final, when another wasp showed up for revenge. This one mostly stayed out of view but had the audacity to land on my neck! Any other time I would have lost all rationality, but as pilot in command I didn’t have a choice. Unphased, I brought myself in for another safe landing. I did it. I’m a pilot. My family watched from the apron as I taxied back to the fuel pumps triumphantly. Despite every setback and challenge, I had come out on top.

Even today, I’m terrified of wasps. I find it amazing that in that moment, I was able to stare my fear in the eye unwavering. Now, I understand the purpose of sometimes-monotonous repetition of the same maneuver. It makes flying second nature. While pilots train for many possible issues, we could never cover them all. I found that out on my very first time alone at the controls. However, I now know that even in an unexpected crisis, training supersedes fear. Gus Steffen
Gus Steffen is a homeschooler who enjoys playing board games, reading, doing anything STEM-related, and flying. He's the first aviator in his family since his great grandpa navigated B-17s in WWII. He received the Ray Aviation Scholarship in 2021, and is only weeks away from the checkride. Gus is an active member of EAA 640 and Learn Build Fly, helping with fly-ins and the airplane build. He loves being a part of the local aviation community, and hopes to stay involved for the rest of his life. After graduation, he plans to get a degree in automation.

Understanding responsibility: my first flight with a passenger