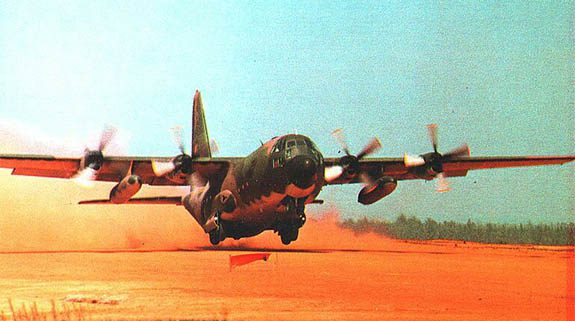 I watched the torrential rains falling, making little splashes on the lake behind my house. It reminded me of the monsoons in Southeast Asia. It was over 50 years ago and perhaps some of my memory may be a little cloudy about the facts, but I don’t think so and I will do my best to be as accurate as I can.

I commanded a C-130B along with my dear friend, former roommate, and fellow pilot. We met in pilot training and our career paths pretty much paralleled for most of our life. Our mission frag for that day was to leave Tan Son Nhut and fly to Tay Ninh, where we would pick up ARVN (Army of the Republic of Vietnam) special forces and take them to Chu Lai, where they would replace the ROK (Republic of Korea) troops. Three round trips, then back home—a long day ahead, scheduled for about twelve hours—not unusual. 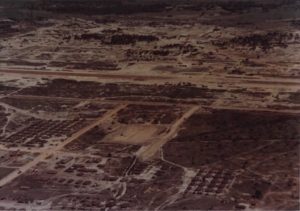 Tay Ninh had a roughly 3000-foot laterite runway (packed stone), not any special challenge for the Hercules but it did take a little finesse. We landed and moments later our passengers arrived. I briefed the troops and we were off to Chu Lai, a little south of Da Nang, not to far from Marble Mountain. Chu Lai also had a plant that made filled milk, a great substitute for real milk, which wasn’t readily available. You don’t know how good that tastes until you can’t get it. We used to wander over to the Pan Am clippers to say hello to the flight attendants to scrounge for real milk. That’s another story and we didn’t have any milk that day either.

We completed the first round trip and headed off for the second set of sorties. At Tay Ninh there were also C-130A models moving cargo and the airport was busy. The weather was clear and the operation seemed to be going smoothly. Off we went for our second round trip. On the ground we searched for a possible supply of C rations—something to eat would be nice. There may have been colonels around but no Colonel Sanders. The lack of food seemed to always keep you scrounging because you hardly ever got off the flight line. Hurry up and wait: the motto of the military.

While waiting for our troops for the third and final sortie before heading home, we heard about the morning casualty. A GI at Tay Ninh was sitting on a bunker on the end of the runway, probably just minding his own business (or maybe he was on guard duty—who knows?). One of the A models on takeoff hit him with its landing gear as it limped off the runway.

How could that happen? The A model has a lighter takeoff maximum weight and is still powerful with those longer, three-bladed props. It turns out the Army misled them a little. They loaded a Deuce and a Half with a water trailer. They gave the loadmaster the weights of each vehicle and off they went. The fact that the truck had about five thousand pounds of cargo and the water trailer was full was a sad and costly oversight.

Extra vigilance was always required, like the time the loadmaster found a hand grenade under some of the seats (the actuator had unscrewed from the grenade so it was inert). The next time might be different. It was a good trick to put tape around the release mechanism of a grenade, pull the pin, and then put the grenade in a can of fuel. The tape dissolved and boom—the guilty party was long gone and death was all around.

Dusk was falling as we unloaded the last of our troops. We refueled and were finally ready to head home. For some reason fatigue seems to sets in more quickly after dark on a long day with warm, humid temperatures. Finally we were ready to go. Checklist complete, loadmaster on the intercom, fire extinguisher near by, clear two (number two engine), starter button pushed in. Next I should hear “rotation,” and sure enough the load master responded, “rotation.” I relaxed as I saw RPM and oil pressure, but then the starter button popped out. That was not right or good.

We went through the procedure again: start button in, no rotation, button popped. It seemed clear we had sheared a starter shaft and I had a feeling we were going to overnight at another strange country club. I wrote “starter shaft sheared” in the maintenance log, then set out to find a mechanic.

He said, “I think I have a shaft in my toolbox,” and lo and behold he did. He eventually found a stand and opened about 75 dzus fasteners to get to the starter. We were all getting tired so we wandered around to amuse ourselves until we finally heard the words we’d been waiting for: “Let’s give it a try; if it’s OK we will shut it down and I’ll open that mass of fasteners to check the starter and you can head home.” 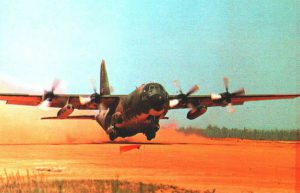 This is where the story really begins. I said, “If it starts, we will take it to Tan Son Nhut and they will check it there.” The military trains you to perform in a regimented manner—follow the rules—so it got very quiet in the cockpit, with not much response from the crew. I think I was the only one that was happy.

We started the engines and taxied out. We flew the plane before so no run-up was required. At 2359, we were cleared for takeoff. Racing down the runway, I heard the required call-outs: airspeed, 80 knots, V1, Vr, positive rate, gear up, after takeoff checklist. The cockpit otherwise was stone cold quiet. Twenty minutes passed, and conversation began. All seemed normal again. About an hour and 20 minutes later we landed at home base and went to operations to get our frag for the next day. We caught the bus to the villa and I looked forward to having a not-so-cold Ba Muoi Ba (33), the French beer made under license with an extra bit of formaldehyde to enhance the flavor.

The next day I departed on the 2:00 bus for a real meal at the O club. It was crowded but served food around the clock. I had a good meal, then faced either a trek to the flight line or trying to scrounge a ride to go to work. Operations was bustling, with crews moving in and out and lots of whodunnit and war stories. One story, however, stood out. By now I am sure you are asking, why would I go on about another normal day in the life of a trash hauler?

As Paul Harvey would say, “And now for the rest of the story.” Did you hear what happened at Chu Lai last night? My ears perked up and I pictured the metal revetments that separated the airplanes. I remembered a GI late one evening telling me to get that mortar magnet off his base, referring to my airplane. Chu Lai was hit last night. One C-130 had two hundred holes in it, one maintenance man was killed, and another wounded.

I was aghast and then asked, “when did it happen?”

Eight minutes after we left. That was when I asked myself, “why did I do that?” Was that fate, good luck, or just the scheme of things in life? Hank Kamerman
Second Lieutenant Hank Kamerman received his wings in 1963 as an Air Force pilot flying the T-37 and T-33. As an active duty pilot, he flew the Lockheed C-130. Following his active duty, he Joined Pan Am as a Boeing 707 flight engineer. Inspector Kamerman, when furloughed, worked for the FAA as an Air Carrier Specialist and later returned to Pan Am, flying the B-727 and A-310. During this time he also flew in the Air Force Reserve. After transitioning into the Airbus he was selected to join Delta Airlines and flew the B-737, B-767, B-727, and the L-1011. Mandatory pilot retirement ended his career at the turn of the century. While retired, thousands of wonderful quiet hours have passed traveling the blue skies, resulting in some great stories and a few exciting adventures.

Learning to fly after 55