Blog - Latest News
You are here: Home1 / Article Archive2 / I was there3 / Owning and flying Bellanca Vikings over the years

My logbook is probably somewhat unique among private pilots in that 90% of my time is in an airplane that isn’t seen at many airports: the Bellanca Viking. I had no real intention of that happening, but it did. I started flying in the late 60s, and got to the point of taking my check ride, but life and wife got in the way.

It was about 10 years after we got married that I felt like I might be able to afford to get back back into something I loved, and four of us bought a 59 model Cessna 150 for the purpose of finishing our licenses. About a year later, we had done that and sold the 150 for almost what we had paid for it. We then set about to find something a little more capable, and stumbled across a 1964 Viking for sale locally that appeared to be in good shape. Yes, we were naïve. The guy was a good salesman, and we didn’t fully know all the things that should be done before buying an airplane, but it did turn out to be a reasonably good buy in the long run.

For a low time pilot accustomed to flying an airplane with a cruise speed of 100 mph to jump into a high performance plane with an approach speed of 100 and cruise speed of 170 mph was probably not the smartest thing anyone ever did. Needless to say, the pucker factor was high during those initial hours. But I managed to survive them, and after a hundred hours or so, I ended up feeling very comfortable with the airplane. I’ll admit there were some exciting times during those early flights, but both of us lived to tell about it. We had lots of good hours together.

Years later, the engine was nearing TBO and we had a decision to make. Do we spend twice what the airplane is probably worth to overhaul the engine, or do we sell it for what we can get out of it and get something newer? We liked the Bellanca, but having one with center stack radios would be nice, as well as one with a gear handle that wasn’t on the floor. We decided to sell it, and ended up with a 74 Viking that served us for a number of years. 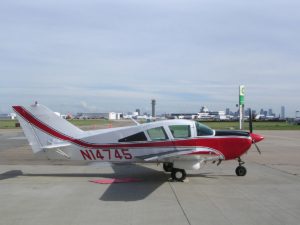 The Viking has a distinctive profile.

The Bellanca is a good overall airplane. I’ve heard people tell me how it would cruise at 165 knots, and it would if you had a 15 knot tailwind. Granted, I couldn’t quite keep up with a Bonanza, but I could buy two Vikings for the price of one V-tail. It was a good cross country machine. At 13 gallons per hour it was not the most economical plane out there, but considering the purchase price, it was one you could live with.

Texas, and especially West Texas, was a good place to own a Bellanca. The climate was dry, which is good for wooden airplanes, and hangars were plentiful, which is a necessity. In addition, there were a lot of Bellancas in the area and mechanics who had seen and worked on them. The gold standard for Bellanca maintenance was Miller Aircraft in Plainview. Until recently, when they shut down the shop because Ronnie, the shop foreman, retired and couldn’t be replaced, people from all over the nation would bring their Vikings to Miller for maintenance. During the heyday of Bellanca sales, I believe that a large percentage the new aircraft that Bellanca sold were delivered through Plainview.

I had a friend who was trying to build time who would ferry them down from the factory in Minnesota to Plainview, where custom radio packages would be installed before delivery. James Miller was a driving force behind Bellanca in those days, and later as well. In 1980 he was part of a group of investors who purchased the assets out of bankruptcy and reorganized the company. They provided parts and built a few new airplanes. There are still sales posters in their waiting room showing cheerleaders from the local college sitting on the wing of a Viking from the wing root to the tip of the wing—probably over 1500 pounds, with no damage to the wing. They were strong airplanes, and people needed to get over their fear of a wood wing.

A little known story about Bellanca is that Charles Lindbergh tried to buy one for his trans-Atlantic flight, but they wouldn’t sell it to him. They didn’t think he had enough experience. Clarence Chamberlain made the second non-stop flight across the Atlantic. In a Bellanca. That was obviously the worst sale Bellanca never made.

During the 1980s, there was a gentleman who actually did an aerobatic act in a Viking. He billed himself as “The Avenger.” The plane was painted black with yellow lightning bolts on the wings, with a lightning bolt accent on the tail. To make it even more authentic, he wore a black suit (Darth Vader-style) and at the end of the show would jump out of the plane onto the wing and spread him arms in victorious fashion. He did do a great show. Not the unlimited stuff you see today, but plenty of loops and rolls, with some pretty impressive low-level maneuvers. So low in fact, rumor had it that he had dug a wing tip in the dirt at one show and cracked a spar, and then did three more shows before he bothered to bring it in to get it fixed. While that sounded a little implausible, I didn’t find it that unbelievable.

A few years after hearing the rumor, I was at the Plainview airport and James Miller and his son Marlin were in the office. Knowing that kind of damage to a plane would have almost certainly been repaired at Miller’s, I asked them if it was true, and they both confirmed it was.

I then turned to the older Mr. Miller, who was about 90 at the time and still flying. “Mr. Miller, have you ever done aerobatics in a Bellanca?”

A wry smile came across his face, and he said, “Not lately.”

He then launched into a story. “I was out in California a few years ago,” he said, “and I met a young man who said ‘Mr. Miller, I am so glad to meet you. My dad told me a story about you, and I can’t believe it’s actually true, so I want to find out if it is. He said he flew with you in a Bellanca, and you put a package of Certs on the glareshield and then did all kinds of aerobatics, and that package of Certs never moved. Is that true?’”

Mr. Miller, with a totally straight face, looked him in the eye and said, “Son, I want you to know that this is how false and malicious rumors get started. It wasn’t Certs. It was Life Savers.”

How could you not buy an airplane from a guy like that?

The real value of an instrument rating
Scroll to top