Blog - Latest News
You are here: Home1 / Article Archive2 / I was there3 / Airplane vs. automobile: commuting to work by air

Commuting to work by automobile is a time-honored ritual for many Americans. Most airplane owners dream of commuting by air if the opportunity would only present itself. A decade ago, that possibility became a reality for me.

Commuting to work is not the same thing as flying in furtherance of a business. For the latter Mark Fay has written an excellent article. What distinguishes commuting from other types of personal flying is its repetitiveness and rigidity. Repetitiveness is fairly manageable, but the rigidity of being expected at your workplace, at a specific time, every day, can expose you to more risk than other types of personal flying.

Mark Fay gives a good outline of how he prepares for a business flight. For commuting, I would suggest taking care of all the airplane-related details (fuel, oil, preflight inspection) immediately after arrival in the evening. The following morning you’ll be pressed for time and preoccupied with the demands of the day. 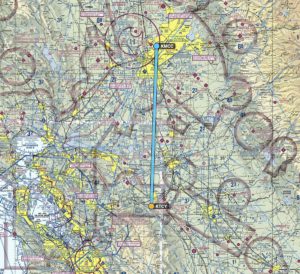 Only a 60-mile flight—how hard could it be?

I was fortunate that my commute started during the summer in reliably clear weather that characterizes central California. My route of flight between Tracy (TCY) and North Highlands (MCC) enjoyed light traffic, excellent radar coverage, and WAAS/ILS approaches. It was an ideal setup for my purpose. Yet, for a year and a half I’d be repeatedly challenged by the demands of that simple mission.

Hesitation and Mitigation: As summer transitioned into fall, weather emerged as a risk to be dealt with.

In the beginning, any below-minimums forecast for McClellan would have me creeping along the parking lot that was Interstate 5 during rush hour. It only took a few of these excursions to motivate a reevaluation of my risk tolerance and an increased focus on mitigation. The first step was an IPC ride with a no-nonsense examiner. Next was acquiring a better understanding of the weather along the route. During winter it could be highly localized and time-variable. The usual drivers were radiation fog, low stratus from the Pacific marine layer, and advection fog from standing water in rice fields—often in combination. Low pressure down from the Gulf of Alaska added classic frontal weather to the mix. I love weather and engaged this with gusto. Those indifferent to it would find it a slough.

You’re Not the Boss: Commuting can pose risks that are unrelated to aviation.

MCC was below minimums but Tracy was VFR under a thin layer of cirrus at departure. Experience suggested the obscuration would clear by my arrival. Instead, it thickened into several hundred feet of solid stratus. NORCAL cleared me for an approach, which confirmed no landing was practical at MCC. Twenty minutes later, a second approach revealed only worsening conditions. After some consultation, NORCAL vectored me to Sacramento Executive airport’s ILS to wait it out. By 11:00 am the AWOS at McClellan was reporting minimums. I quickly filed and launched.

A queue of corporate and Part 135 aircraft were lining up on the parallel taxiway when I landed, eager to get going. Their enthusiasm wasn’t shared by my company’s vice president, who gave me a hard look then demanded, “Where the hell have you been!” Flying four instrument approaches left him nonplussed.

In today’s workplace, nobody is indispensable. But if you commute by air, you owe it to yourself not to be easily dispensable.

Dirty and Wet: Rain had been falling all afternoon and was forecast to continue into the night. When the engine repeatedly failed a magneto check I considered departing for home on the good magneto, but the factors were against it: impending darkness, dew point spread, unknown fault… Only the fault could I do anything about. When the engine cooled I removed the cowling, climbed back into the airplane (soaking wet), and ran the engine on the bad magneto, bucking and shaking, for a couple of minutes. A quick check of the valve covers revealed one that was cold, hence the problem cylinder. A piece of debris had wedged between the lower plug’s electrodes, shorting it. A technician at the Jet Center removed the chip with a dental pick and I was on my way.

Open Wallet: In my enthusiasm for commuting, I never made an assessment of the actual costs before committing to it: Fuel, oil changes, incidentals, and TBO depreciation—the last frightened me so much I ignored it. Those costs can easily exceed the fixed costs of a hangar, insurance, and database updates. On the positive side, this nullifies any criticism that you’re incurring high fixed costs for an asset you rarely use. I tried that argument on my wife with mixed results.

Minimum Equipment: In order to maintain high dispatch reliability, the FAA permits airlines to operate with certain components inoperable—all codified in an approved minimum equipment list. For the rest of us, the FAA has basic rules about what equipment can’t be inoperative for a given flight. Beyond that, personal pilots are left to decide whether a fault will compromise flight safety and how to mitigate it.

Cylinder head temperature senders rarely last longer than 20 hours in our airplane. First they become intermittent, and then they die. I commuted a year with one in that state and never gave it a second thought.

At one point the airplane developed a severe swerve under hard braking. Corrective action had to be deferred a couple of weeks until the problem could be properly investigated. In my view it was a manageable fault in a low performance airplane—I wouldn’t attempt it in an Aerostar.

In the depths of winter our faithful 430W navigator posted a “VOR/Localizer Failed” error. My technician said many older Garmin 430s had a nav board which would occasionally produce the fault, and that recycling the box in-flight restores functionality. From that point I briefed every approach and departure to include an escape route on the number two (VFR) GPS. The localizer never did quit on approach but the plan proved its worth when the Garmin experienced a WAAS RAIM failure in significant rain at the final approach fix. 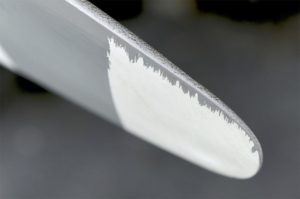 Flying in moderate rain can lead to noticeable prop erosion.

On the subject of rain, operation in moderate rain/sleet will take a toll on the propeller. Fortunately, using a file to restore the prop’s leading edge is a straightforward exercise (per AC 43.13). A technician can show you how and sign off your work.

That winter substantially broadened my view of manageable risk, but there were lines I wouldn’t cross. One night, descending through a broken layer, the drive shaft on our vacuum pump sheared. Waiting for a replacement pump, a friend suggested I continue air commuting since I was IFR proficient and the airplane’s rate-based autopilot didn’t rely on the vacuum system. His argument possessed a curious logic, and would make sense in an emergency, but I couldn’t bring myself to consider it otherwise.

Theoretical Risk and Reality: We don’t waste time thinking about the risk associated with things we never do. Until we decide to do them.

An irrigation canal runs parallel to the Tracy airport, and close in. On this morning conditions allowed dense fog to form over the south side of the field. It would likely burn off in an hour but I had a critical morning meeting that couldn’t be postponed. I’d flown “zero visibility” takeoffs under the hood as part of my instrument training. Backed into a corner now, I considered it. The runway was wide, the liftoff speed low, and there was no wind. After consideration I judged the risk would be elevated but acceptable. As it happened, the most difficult part was finding the taxiway.

That said, it reflected poor contingency planning. In the future I booked a room in North Highlands on the night before critical events at work.

Fatigue is the Hunter: Flying experience can afford an added level of safety for older pilots. And fatigue can wipe it away!

The afternoon TAFs were forecasting 5000 broken, which was reaffirmed a couple of hours later by the skew-T charts. Sitting in the airplane, I listened disheartened as the MCC AWOS reported 800 overcast. I’d had a very long day, it was late at night, and I’d been counting on an easy VFR ride home.

The forecast’s collapse caught everyone by surprise and clearance delivery told me to call back in an hour when they might have something for me. I sat shivering in the airplane until we were finally released. Meanwhile the ceiling had dropped to 500 feet and was continuing down. Closing in on Tracy I was cold, tired, and hungry. The first approach ended when the localizer went off scale a half mile from runway 12. My ability to fly with precision was slipping away. I asked the controller at for another try and was cleared back to the runway 12 initial fix.

In the procedure turn I thought about engaging the autopilot but (incomprehensibly!) did not. It had been years since I’d practiced an autopilot approach. I was in no state of mind to try anything that would take me outside my familiar routine. The second attempt ended when I glimpsed a street lamp and several parked cars less than 100 feet directly below.

After an immediate climb to safety, ATC provided vectors to my alternate, Stockton, where a 700 foot ceiling and the approach lighting system kept me out of trouble.

A research psychologist said the fatigued brain will tend to reject decisions which require forceful, focused, or novel actions. The brain evolved to do this in order to conserve energy when fatigue sets in. He said the effect could be demonstrated in every animal tested—including me I suppose.

When it All Becomes Too Much: The aircraft ownership experience will include periods when the owner decides they hate their airplane.

I reached that point late in the winter. The resolution was to find an inexpensive domicile in North Highlands and limit the air commute to two or three flights a week. A local motel was amenable to selling me blocks of time at a discount. Things began to turn around.

Sure You Can: Should you try commuting if you get the opportunity? I’d say absolutely! But launch into it with your eyes open. Be prepared to develop a more nuanced approach to risk that goes beyond the popular acronyms and colored charts. I can say, without a hint of irony, that year of commuting left me a better-rounded and, eventually, a safer airman.

Kim Hunter
Kim Hunter is a 2000-hour commercial pilot. He learned to fly at an airport outside Detroit in the 1960's but was too young to solo. Soon thereafter, he shifted his financial priorities toward the fair sex and soloing got delayed by thirty years. Today he flies occasionally for business but mostly for pleasure. And, yes, he finally obtained an instrument rating.

Flying loaded: what could possibly go wrong?
Scroll to top