Contrary to the title, you frequently hear two different viewpoints being vociferously debated between the proponents of crabbing into wind or wing down and slipping for crosswind landings. Let’s dissect the arguments. Throughout this discussion let’s assume that the direct crosswind is at least 15 knots or more, or approaching the limits for your airplane.

Bear in mind the published demonstrated crosswind listed in the airplane flight manual is just that. It is not an airplane physical or legal limitation but, in all probability, it could be the maximum crosswind found during the airplane’s certification test flying. We will come to crosswind landings after first looking at crosswind takeoffs. 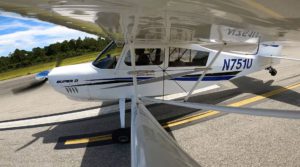 Crosswind takeoffs in a tailwheel airplane are not always easy.

Tailwheel airplanes have the problem compounded by the large keel area aft of the pivot point (the downwind main wheel), allowing the airplane to weathercock. If the manoeuvre is fast enough, the centrifugal force of the turn will also tip over the airplane.

Becoming airborne prematurely must be avoided on a crosswind takeoff because if the airplane touches down again with drift on, it could turn base over apex. A very painful operation made unlikely by making a flapless takeoff and holding the airplane level while accelerating to a speed slightly higher than normal, then lifting off abruptly. Flapless (check the pilot’s notes/flight manual) because it allows the nose wheel to remain in ground contact longer for added directional control to a higher speed than taking off with partial flap selected.

Sweaty palms on crosswind takeoffs will disappear if the pilot flies the airplane as though the pilot in command means business. FULL RUDDER, FULL AILERON into wind and relax the pressures as increasing airspeed improves control effectiveness. When clear of the ground make a coordinated turn into wind to correct for drift and to maintain the runway centre line.

Imagine the case where you don’t do this and find the airplane pointing straight at the hangar. Full rudder keeps you pointing straight at the hangar but there is nothing further available to return the airplane nose down the runway centre line. In this extreme and theoretical case, had the pilot applied full rudder at the start of the takeoff run and only reduced the rudder deflection as necessary to keep straight, the problem couldn’t arise.

Obviously, on those airplanes where rudder and nose wheel steering are interconnected the application of full rudder at the start of the takeoff is impractical. Students are not always told much how aileron or rudder to use. Don’t be like a trained monkey—THINK—you are less likely to get into trouble overcorrecting, than letting things get out of hand from timid control inputs on a crosswind takeoff.

Now let’s look at crosswind landings, but first let me quote from one manufacturer’s Pilot’s Operating Handbook: “The best time to know procedures and the worst time to practice them is during an emergency.” In adopting this philosophy, you need to ensure your flight techniques employed are not those used only during crosswind landings but are related to every flight you do.

If we agree (and I think most pilots do) that good landings start with good approaches, it follows that good speed and glidepath control make for good landings. Precise numbers can be quoted for airspeeds on the approach but glidepath positioning is a skill you acquire from repetitive demonstration and by trial and error in everyday flying. Glidepath control intuitively becomes a comparison of visual relationships. Airplane attitude relative to the horizon, position of the nose relative to the end of the runway, rate of closing with the ground, runway perspective, etc.

On a crosswind approach with wings level, a crab angle sufficient to maintain runway centre line maintains all these relationships. The only thing different from an into wind landing is that the airplane nose points slightly to one side or the other of the runway.

If, however, we adopt the alternative method, downwind rudder is used to align the airplane parallel to the runway as into-wind aileron is applied to prevent drifting. And to maintain your lateral position on the runway centre line a steady sideslip is established. You don’t normally fly with crossed controls so don’t on a crosswind approach. If you do all the normal relationships you strive so hard to maintain for a good approach disappear. The position of your aiming point above the nose has changed, so has the sink rate for a given airspeed and power setting; you can feel this sideslip in the seat of your pants. Nothing’s normal. It looks like a good case for the crab crosswind technique on approach down to the landing flare. 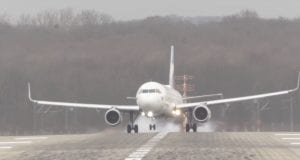 What next? We can’t land with drift on or we meet that old base over apex trick. When you get the opportunity, watch the professionals in their Boeings, Airbuses, Embraers, Gulfstreams, or Cessna 402s and see what they do. The real “aces” apply downwind rudder just prior to touchdown to eliminate the crab and align the airplane along the runway centre line. As rudder is applied, the upwind wing will sweep forward and because it is going faster, it develops more lift and hence roll. The pros stop the roll with upwind aileron and touch down with crossed controls.

As the airplane slows down note how they increase the control deflections. Those full-time pilots who don’t think they are in the “ace” category are very careful to make sure they don’t land with drift on. They align the airplane along the centreline early during the hold-off flare and if their speed is too high for a touchdown on the main wheels, they apply into-wind aileron to lower the wing while keeping straight with opposite rudder. This causes a sideslip but because of the crosswind the airplane will not drift laterally in relation to the runway centreline. They level the wings just prior to touchdown by slightly decreasing the aileron input—bearing in mind that it is not catastrophic to land gently on one wheel but better still to use both main wheels.

For general aviation pilots who fly for sport and recreation and don’t think they are in the professional’s “ace” category, the early removal of crab or drift then sideslip during the hold-off to make sure they don’t land nose wheel first seems to be the best technique. After all, most pilots can and do level the wings after a wing drop on hold-off, so what is very different about putting a wing down on a crosswind landing while keeping straight with rudder just prior to touchdown?

If you make a crab approach and you can only see the runway out the side window, it is easy to see that you have bitten off more crosswind than you can chew! A sideslip approach does not make crosswind evaluation as easy. Note how quickly the Boeings, Airbuses, Embraers, Gulfstreams, or Cessna 402s go-around in really windy conditions if things are not to their liking. They don’t wait for extreme airplane attitudes to develop as some light airplane pilots do before deciding to go-around. Crosswind operations are not worth shouting about but they are worth thinking about.

Finally, just because your wheels have touched the ground does not mean flying has finished for the day. As the speed washes off, so the flying controls lose their effectiveness. Thus, more rudder and aileron need be applied up to full deflection unless over control appears first.

It seldom does. Try it. Brian Souter
Brian Souter is a retired Boeing 767 captain who has flown his Piper Arrow III from New Zealand to Australia twice, plus a trip to Norfolk Island with a friend who needed duty-free LEGO for his grandchildren. The Arrow allowed the Souters to visit Darwin and Broome, where camel rides on the beach took place at sunset. GA airplanes do lead to marvellous adventures.