Blog - Latest News
You are here: Home1 / Article Archive2 / I was there3 / Suddenly the engine went quiet

In early 2005, the 1981 Cessna TU206G that I was flying had recently returned to service after a new engine install, which I had assisted with. I have always liked turning wrenches and the highly experienced A&P/IA I was working with was more than willing to let me help with the engine change. All accessories were replaced or overhauled contemporaneous with the engine replacement with a newly factory overhauled engine.

During the removal process of the old engine, the IA instructed me to mark the turbocharger oil inlet and outlet lines clearly to assist with the install of the new engine. The IA made a point of telling me, “don’t mix those up or you’ll burn up the turbocharger.” So, I carefully confirmed and marked the lines as instructed.  The new engine install resulted in no squawks and the aircraft returned to service.

Shortly thereafter, I was cruising along on the second leg of a round robin flight with that new engine running smoothly when suddenly the engine went quiet. The pitch and RPM dropped as if the throttle had been pulled back completely, like a simulated engine failure. During the next two minutes of figuring out landing options, troubleshooting and going through the engine out checklist, I came to realize the engine was actually still running and producing power—normally aspirated power—but no turbocharger. My immediate thought was “s**t, I must have mixed up those turbo lines.” 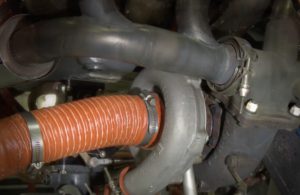 Turbochargers are often the first suspect when an engine runs rough.

The engine analyzer showed oil pressure, CHT and EGT were all normal. With an airport a short distance in front of me, I landed without incident. With no maintenance on the field and the IA who conducted the engine change on vacation (no cell phones at that time), I called another of the fleet IAs and explained, somewhat sheepishly, what had happened and that I suspected I’d lost the turbocharger.

He very patiently had me explain again exactly what had occurred and what the instruments showed. He told me that he suspected an “upper deck” problem and suggested I pull the top cowling and inspect the air hoses that feed air from the turbo charger to the air intake. Sure enough, when I did that, I found that a $2 clamp had failed on one side of an air hose. This caused it to dislodge enough that it was not properly feeding air to the intake from the turbocharger. Suddenly, there was hope; I hadn’t screwed up and the turbocharger was still good.

At the direction of the IA, I bummed a courtesy car, drove to the local parts store, and purchased a new $2 clamp. I installed it, and voila—problem solved.  It was getting late so I spent the night in a motel and returned to my home base the next day, feeling much better about things.

The experience of helping with aircraft maintenance over my 34 years of flying and aircraft ownership has been an asset. Knowing what’s under that engine cowling and what it’s supposed to look like is useful when it comes to troubleshooting engine problems. I recently had yet another hose clamp issue on my personal Cessna 182. I found that one clamp had loosened up just enough to allow too much air to enter the intake, causing backfiring at low idle. Covering the basics like checking tightness on the clamps quickly resolved the problem. The more you understand what’s normal in that engine compartment, the better the chances you might spot something that isn’t.

I highly recommend helping with your annual inspections; it’s well worth your time and may just come in handy someday. Nick Herring
Nick Herring grew up near a small GA airport where he caught the “aviation disease” as a kid. He obtained his private pilot license in 1987 flying out of a small Montana airport. A National Park Ranger for over 40 years, he has had the privilege of flying over some of the most scenic landmarks across the country, including a couple of trips to and from Alaska. He was lucky enough to add fleet pilot to his Park Ranger duties, flying Cessna 206 aircraft for the government and conducting all kinds of missions including wildlife telemetry, search and rescue, boundary/hunting patrols, and passenger transports. Retired now, he flies his own 1965 Cessna 182 out of Colorado, where he conducts volunteer missions for wildland and wildlife conservation when not flying just for fun.

The hardest thing I’ve ever done in an aircraft