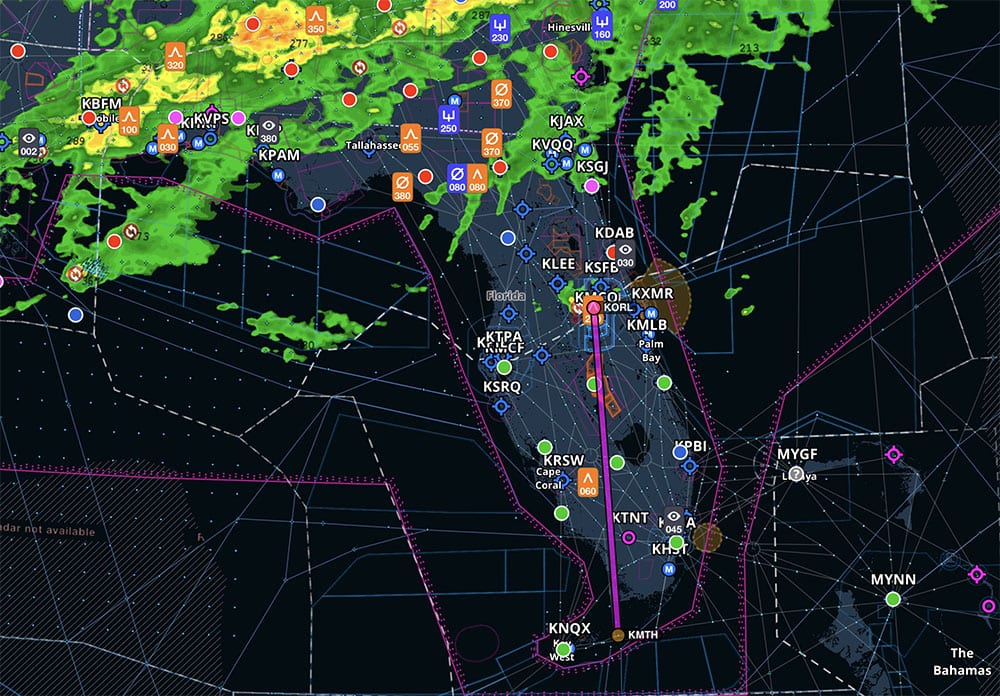 A relaxing few days in the Florida Keys have come to an end, and you have Mother Nature to thank for your amended plans. An imposing cold front means that, instead of staying on the beach, you’re trying to get home before storms and IFR conditions come to town. The goal today is to fly your club’s Cessna 172 from Marathon (MTH) to Orlando (ORL), Florida. It should take about two hours, and with a proposed departure time of 4:15pm, you would be landing a little before sunset.

But the weather you see on ForeFlight isn’t exactly quiet. Since you do not have an instrument rating, this flight will have to be made VFR. Can you get to Orlando safely? Review the weather below and add your comment.

The route overview makes it clear what the challenge will be: getting home before the rain moves in. It appears quite scattered around Orlando, but there are some uglier colors up north.

The surface analysis shows the source of this rain, with a cold front draped across Florida from west to east.

The prog charts show the front, along with its associated rain, sagging south overnight.

Tomorrow morning looks even worse, so spending the night may not solve any problems. But maybe the worst would move off to the east?

To get more detail on the rain, you pull up the regional radar image for Florida. It shows a convective cell right over Orlando, but the solid line of rain is still north of Ocala.

The satellite image shows mostly clear skies for the first half of your flight, but increasing clouds the further north you get.

The cloud forecast map suggests that ceilings will only become an issue right around your destination.

The weather in the Keys is excellent, and forecast to stay that way (that’s why you came in the first place!).

En route, most airports are reporting scattered clouds at around 5,000 feet, but good visibility and light winds.

In Orlando, the current weather is great, but the TAF shows marginal VFR conditions as the day goes on.

There’s one Pilot Report that is worth considering – an Airbus just a few miles north of your destination airport reported a broken ceiling at 2,700 feet.

It’s time to make the call: are you taking off for home or spending another night in Marathon? The weather looks quite good until the last 20 miles, but those miles include scattered rain and perhaps marginal VFR ceilings. Is it a go or a no go? Add your comment below.

Hangar flying: you are qualified to fly like this

Engine hiccups: third time is the charm?
Scroll to top