Blog - Latest News
You are here: Home1 / Article Archive2 / Christmas special3 / A Christmas gift to myself 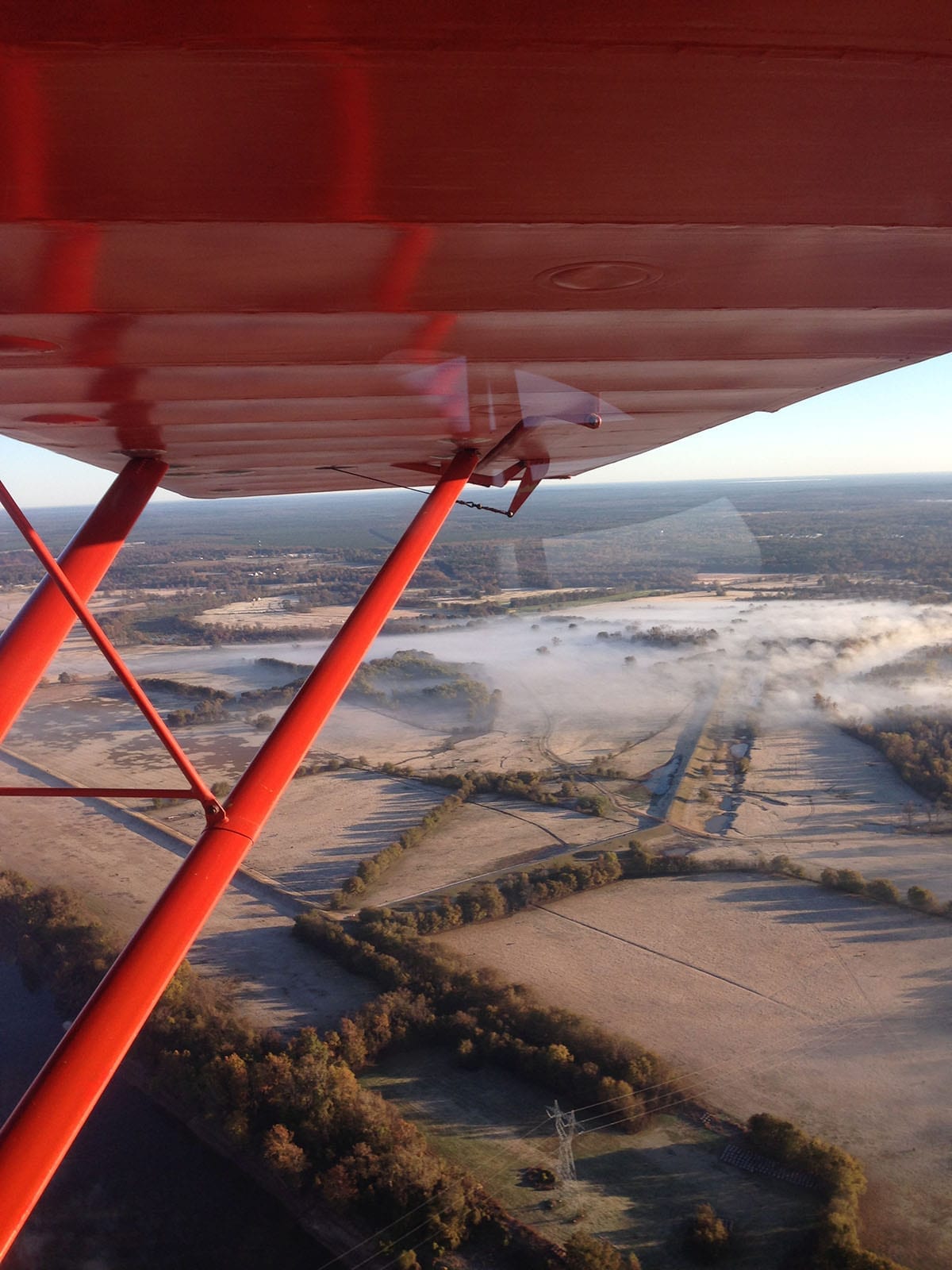 It’s Christmas morning and I rise early, not to play Santa to my children, for they are long grown. Today I rise early to gift myself. I’m careful not to wake my wife, warm and snuggled under the covers. She has no interest in this thing that I go to do.

It’s cold and clear as I step outside, the stars like diamonds on black velvet. My pickup truck is covered in frost. I crank it up and toss the headset bag in the front seat, waiting for the defroster to work its magic. Finally, I’m on my way, making the 20-mile drive with Bing Crosby and the Andrews Sisters singing their Christmas best.

Now this is a gift.

It’s still dark out as I arrive at the hangar an hour before sunrise, for the little Continental likes her heat on cold mornings. I wrap up her cowling, plugging all the places where the heat might escape, and plug in the small electric heater that’s used just for this purpose. She likes about an hour of this when it’s 32 degrees out. The little heater hums as I do my preflight.

All done, I retreat to the warm back room in the hangar and have a cup of coffee. One more check of the weather and local info. No clouds, no wind, no TFRs, no NOTAMs of import. Now I wait. A glance out the window tells me that sunrise is coming, but it seems to be taking its sweet time today. The airport is quiet this morning. I hear no hangar doors opening, no airplane engines idling. I noticed no other cars on the way into this side of the field.

Ah, finally a glow in the east that brightens as the sun is making its way upward. It won’t be long now. About 7:04 the hangar doors complain a little as I slide them open, and the old girl is pushed outside to her starting spot. Alerted by their squeals, I pause a second to watch two pair of wood ducks as they fly through the treetops in tight formation, headed down into the slough just two rows of hangars over. With the hangar doors closed at 7:10, the little taildragger sits chocked, with tail wheel secured to the ground, ready for a flip of the prop.

Eight blades of prime, switch ON, throttle cracked. She’s happy to start on the first pull and settles into a steady chug-a-chug. Official sunrise today is about 7:15, so I untie the tail, pull the chocks and head toward taxiway November. A call to Ground with Merry Christmas wishes gets me the same wishes returned along with instructions to taxi to runway 14 and a report of calm winds. A glance at the windsock confirms this.

At the runway, I check that the oil temp is coming up, run through the CIGAR TIP check list, call Tower (same controller as Ground this morning) and I’m cleared to go. With a little throttle we roll over the numbers and bring the nose around to line up with the centerline. The throttle comes in slowly to the stop, and the Continental relishes the cold as she seems to corral all 65 ponies for the takeoff.

The Aeronca also likes the cold air under her wings, for she’s off the ground quickly. I’m at pattern altitude as I’m turning crosswind at the end of the 5000-foot runway. I level off at about 1300 feet in the calm, crisp air on a left downwind departure. Even though there was a frost on the ground this morning, it’s not uncomfortable in the small cabin. Despite the drafts and the lack of a heater, I’m fine wearing jeans and a flannel shirt as the sun shines in the right rear window, slightly behind me as I head northward to the local practice area.

I scan the old girl’s sparse 1939 panel. Oil temp and pressure: good. Tach: 2150. We’re sitting pretty. The air is smooth as glass, and occasionally I spot wisps of smoke rising straight up from chimneys with no breeze to stir it. I can see for miles across pastures with cattle and horses, and farmlands that now lie barren, awaiting springtime and new seed.

These views are even better on Christmas Day.

I bear a little to the northeast, over a small neighborhood just across the river, where I bank over into a 360 to say Merry Christmas to my friend Buddy. Now it’s northward along the river. The watery snake zigs and zags more or less leading the way from here, and it’s a beautiful sight. What a morning to enjoy a flight!

Three years before, I’d managed to do a Christmas flight, but weather and life hadn’t lined up again until now for another one. Any time is a good time to fly, but this seems a little special. Perhaps it’s your faith, or just the awareness that this time of year brings. Regardless, it’s a good time to reflect and be thankful for this gift of flight. I sometimes still can’t believe that I am able to do this, or that I’m allowed to do this.

One of the things that make this possible is this little airplane that I fly, a gift from a man named Henry Haughton to EAA Chapter 343 about 20 years ago. The chapter restored it just in time for Sport Pilot rules, and they placed it into the care of a flying club formed by a group of its members. Though I wasn’t around the chapter at that time, there were several that put it to good use. She has soldiered on since then, receiving a few knocks along the way, but she’s built solid, and she’s tough. Through the years she’s reminded many pilots that stick and rudder (with the emphasis on rudder) skills are the heart of flying. Her pedals have taught them to dance (the pilot should always lead!).

I continue on my way and then remember a private strip of some friends that I have yet to locate, so a turn to the northwest takes me north of the lake and over the state line into northeast Texas, leaving behind the farmlands and headed toward piney woods. This causes me to pause to remember the words from instructors past: “Where would you land right now if the engine quits?”

With evergreen treetops below, I’m more attentive now. I start looking for the landmarks that will lead me to the private airport. I’m about a mile away before I spot the strip. I circle around to the north and let down for a low approach at 200 feet down the runway, saying Merry Christmas to the Coles, assuming that they’re home. Some other time will do for a landing here.

At the end I start a shallow climb with a slight right turn to the southeast, and head to another airport before I return home. In about ten minutes I’m entering the traffic pattern at Vivian. Full stop landing, 180 at the end and take off again for home. It is severe clear. The buildings of the city are clearly visible at 30 miles away.

“Up here, it’s good to be aviating with no particular purpose in mind other than the pure enjoyment of flight.”

I point the nose toward a spot generally north of the buildings where the airport lies. I’m in no hurry, and the Aeronca’s slow pace suits me. I meander around the sky, happy to enjoy more of this Christmas morning flight. Down below, presents are opened, new bicycles are ridden, and Christmas dinners are prepared. Up here, it’s good to be aviating with no particular purpose in mind other than the pure enjoyment of flight. No doubt some of my fellow pilots are also flying today, some flying for the sake of flying just as I am, and others perhaps headed to Grandma’s house.

Finally, I decide to start winding up this flight as my family will be waking soon, getting ready for the day’s festivities, and I should be there to help prepare. After a straight-in approach to runway 14, the last part of this Christmas gift is a buttery-smooth three-point landing. I exit the runway and taxi to the hangar, chatting with the controller. He is definitely not busy this morning.

I shut her down, and inside she goes. I don’t mind that there are no bugs to wipe off today. An entry goes into the flight log, and I walk around her once more to be sure that all her parts returned with us. I want to take care of her, for she’s given me a most excellent Christmas gift. Jimmy McNaughton
Jimmy McNaughton is a Private Pilot whose aviation journey is short, but began long ago. He earned his license at age 17 while working at an airport in northwest Louisiana. He flew for a few years before, well, you know the things that happen. Finally, after a little more than 34 years away from the cockpit, he was able to pick up his journey in a 1939 Aeronca 65-C, a flying club plane. He’d like to be a Commercial Pilot and add ratings, fly the backcountry, and do some aerobatics, but for now that’s all a dream. Until then, he plans to keep flying the Aeronca, and enjoying it.

The day it snowed in Vietnam: a true story

Friday photo: above the thermal layer
Scroll to top