Blog - Latest News
You are here: Home1 / Article Archive2 / I was there3 / Now do it backwards 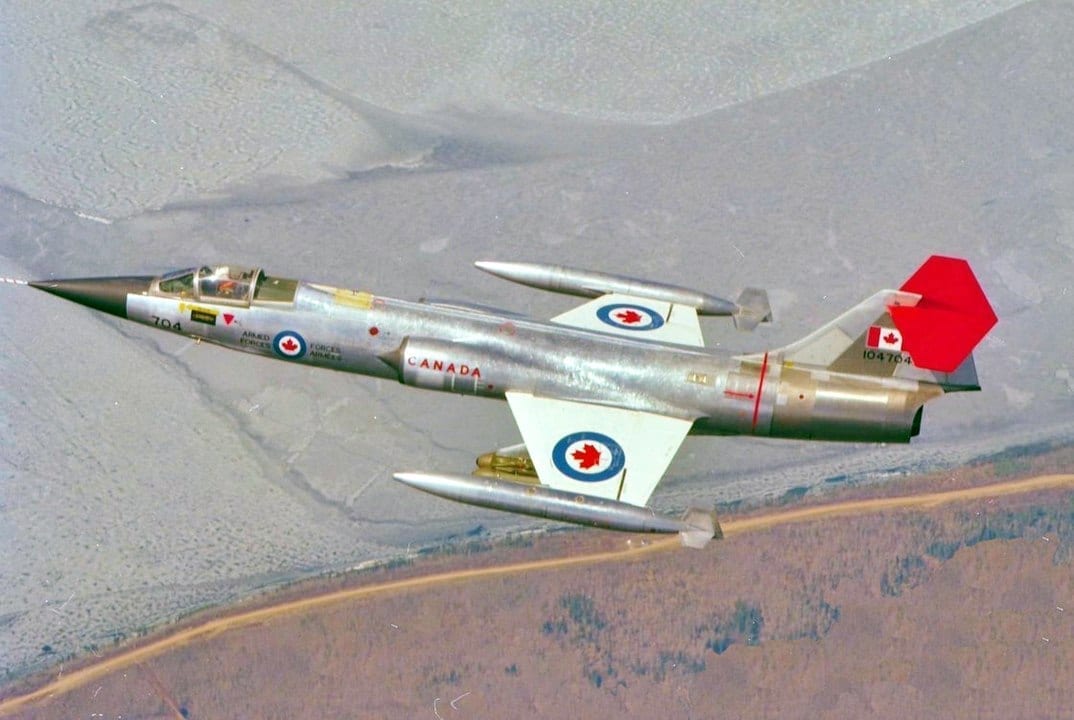 Those familiar with the song and dance teams of the 1940s and 50s are familiar with the comment. Fred Astaire was a master dancer and his partner, Ginger Rogers, did the same routines backwards and in high heels. Well, no high heels here (mostly—keep reading), but an aviation story where doing it backwards was part of the event.

In the 1960s and 70s, many of the world’s air forces flew variants of the Lockheed F-104 Starfighter. The Starfighter was one of the infamous Century Series supersonic jets. Sleek and bullet-fast it, was known for climb rate and Mach two speed. In early variants, it was also known as a handful to fly by inexperienced pilots, including those with lots of time in early generation jet fighters like the F-86 and Hawker Hunter. It didn’t stay in the USAF inventory long because other Century Series airplanes were more adaptable to the cross section of tactical missions, but it did find success as an export fighter flown by many NATO air forces and in Pakistan, Japan, and Taiwan.

One of the primary users of the Starfighter was the Royal Canadian Air Force (RCAF). They flew the CF-104, one of the advanced versions of the Starfighter built under license, and used it fulfilling Canada’s commitment to have fighters based in Europe. The RCAF’s mission in Germany was air to ground, principally for nuclear strike against Warsaw Pact targets and reconnaissance. There was some conventional attack capability, but the limited payload of the CF kept this role in the background.

For the strike role, the CF-104 (and other Starfighters of the G series flown by Germany, Belgium, and the Netherlands) was a very good bird. Upgraded with a very capable ground mapping radar, one of the first inertial navigation systems on fighters, and carrying a single nuclear store centerline and external wing tanks, it was lethal. Its streamlined shape gave it excellent low altitude speed and brother, did the Canadians enjoy low altitude, high speed. Especially up and down the curves of the Rhine river and over—directly over—German castles (“it’s great to be the conqueror, you betcha”).

Canadians did well in many of the tactical competitions in Central Europe involving precise navigation and exacting time over target (TOT). This is the story of an American exchange pilot serving with the RCAF on assignment at Canadian Air Force Base Lahr in southwestern Germany in the 70s. His name was Mike, and he was an experienced Phantom pilot with a Vietnam tour and over a thousand hours in Double Ugly. He did it backwards.

Before heading to Lahr, Mike went through a check-out in the Starfighter in Canada. He was qualified to fly it and had weapons qualification on ranges before shipping out. But he’d need to get a Tactical Qualification check in country before being fully mission-ready and able to pull “the Q,” e.g., sit 15-minute alert on an aircraft loaded with a nuclear weapon. He’d do lots of study on the local area, rules, and the protocols for being responsible to carry, arm, and release a nuclear weapon much more powerful than either of the two dropped to end WWII.

He’d take several supervised flights in Germany—most of these would be “canned” or preplanned low levels across the rolling terrain of central Europe—much different than his experiences in Canada, or for that matter in the US. Hugging the terrain, he would fly low (much of the time at 300 ft. AGL) and fast (450 TAS for cruise, then about 540 TAS for the dash to the target, weapons release, and escape maneuver) before heading home. He’d have another 104 flying loosely on his wing to validate his maneuvers, give him hints on how to fly over a ridge line without popping into radar coverage or highlighting his camouflaged jet against blue sky or a white cloud background.

Now, if you were an American pilot in a similar mission you’d plan your flights to avoid noise sensitive areas, large cities, tourist sites, airfields, and chunks of three-dimensional sky where German restrictions prohibited transit. Canadians, and the RAF for that matter, took a different approach. Know where the towers and cables are, understand the hazards of flying over densely populated areas and artillery firing ranges—but the winners weren’t so worried about noise or balking dairy cattle complaints from the German population. Routes flown by the Commonwealth were much more free range. And senior military and diplomats of the Crown seldom acted on anything that didn’t cause damage—broken windows not counting.

Planning for low level flying is a demanding, rigorous task. Lots of chart reading, checking NOTAMS and military exercise locations and schedules in the ops room. Target study to develop a plan of attack involved radar predictions from files and artist interpretations of what radar image you’d have on your scope at a turn point, and after, to validate you inertial information. Time and distance were still the bedrock. When would you be at the bend in the river on the scope, where would the smoke stack be relative to the y in the rail road.

Then you made the map. If it was something you’d fly again, you’d develop a book of flip charts for each leg of the low level, annotated with the flight path, heading, and time ticks and perhaps a radar prediction for a certain point on that leg. You’d also make note of distinctive forest patterns. In Europe they preserve the Wald—a good notch in a tree line is a significant check point—it was there years ago (even with WWII) and will odds-on be there for years to come. Make your mission book once—update for new information on obstructions to flight, hot fire areas—good to go.

Mike’s eval flight would be different. It would be to a target picked by the eval pilot and given to him about three hours before the flight. He’d study it, plan out the route, lay in the details, and most likely staple or join it with rings and away he’d go. Mike had a better idea this time. He made each page in detail, annotated and carefully placed it in his right leg G-suit pocket. Pull a page out, fly it, stuff it in his left pocket to avoid clutter in the cockpit, pull out the next page, and so on. Off target, with the escape maneuver completed, he would climb out VFR and head back to Lahr.

Not so fast. The flight went well—accurate nav, great time control, and the release timer expired just when the nuke would have been bombs away if it were a live drop. The chase pilot loose on his wing, he was ready for RTB, debrief, and a good draft beer—German of course. Into his turn, his evaluator announced, “nice job Yank, now let’s take it home in reverse.”

Yikes—all those chart pages were in his left pocket all right—but in random order, wadded and upside down. He was gonna do it “backwards.” Well, he settled down, did a mental calculation of the reverse initial point to target leg, settled on a heading, then carefully sorted the pages into good order. After a couple of legs, the evaluator pulled line abreast, gave Mike a thumbs up and pointed direct to Lahr. Back to the field for a low altitude entry into the pattern and a snappy pitch up to the downwind, base, turn to final (in a light F-104 still about 180 miles per hour), touchdown, drag chute out, and taxi in as a mission ready “Yank in the RCAF.”

A note about those high heels: in the early days of the Starfighter, it had a downward ejection seat and the pilots actually wore polished spurs to attach their legs to the seat and avoid flailing on the way out. So, in a sense they did wear high heels—but not in the CF-104.

Closing comment: in no way do I want to infer Canadian pilots were undisciplined. They were rock solid when I was stationed in Germany, and I am sure they are still damn good. Solid aviators in every sense of the word. I know a few and spent some time with some at a NATO Tiger meet in France. They are fine pilots, and also good guys to travel with on a night mission to Paris.

Steve Mosier
Colonel (ret) Steve Mosier served nearly twenty-seven years in the Air Force flying F-4 and F-15s in TAC, PACAF and USAFE. He was the TAC HQ F-15 requirements officer, and later the Chief of the Checkmate Group in the Pentagon.Memorable experiences include a combat tour with Satan’s Angels; taking the 336TFS to Germany on REFORGER; and leading the TAC F-15 Demonstration team, a KC-10 and B-52, to Santiago, Chile.He and his wife, Pat, recently celebrated their 50th wedding anniversary in Marietta, GA where they live near their family, Megan, Bill and their four-year-old grandson, Liam.

Flying away—two experiences flying outside the US

Friday Photo: morning over the Cascades
Scroll to top