Blog - Latest News
You are here: Home1 / Article Archive2 / Go or No Go3 / Go or No Go: dodging storms in the Southeast 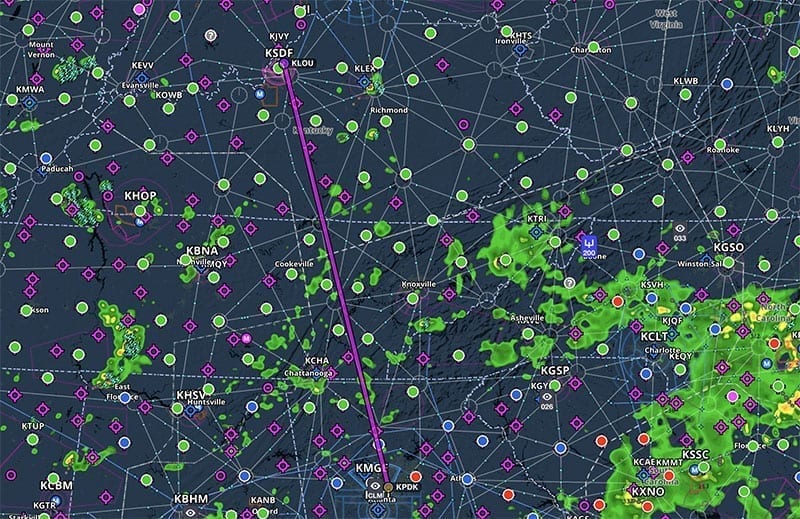 The mission today is to fly from your home in Louisville, Kentucky, to visit your business in Atlanta, Georgia. With the coronavirus pandemic, you’re trying to do it in a day and save a hotel stay. You made it to Atlanta easily with an 8am takeoff, but now the question is whether you can make it home. As you review the weather in the pilot’s lounge at PDK, ForeFlight shows some pop-up storms.

The flight home should be about an hour and a half in your turbo Bonanza, and its solid performance means a flight in the mid-teens is an option. You’re instrument rated and current, so you’re planning on flying IFR, and your airplane is equipped with SiriusXM satellite weather, a modern GPS stack, and a good autopilot. Your proposed departure time is 1830Z. Read the weather briefing below and tell us if you would make the trip or cancel.

The radar map shows lots of rain to the east, but along your route it looks more like typical summer afternoon “popcorn” than anything organized. Most of the METAR circles are green.

The surface analysis shows no major weather system along your route; that’s off to the south and east.

The prog charts show scattered storms this afternoon, with the worst weather remaining over Georgia and South Carolina.

Later tonight it’s more of the same, with scattered rain and storms throughout the Southeast.

It’s summertime in Georgia, so it’s not surprising that storms are brewing. The question is: how many are there and how fast are they developing? A look at the regional radar shows a lot of action in Georgia, but the worst is to the south of your departure airport.

Closer to your destination, things seem to be clearer.

The infrared satellite shows a typical pattern of scattered cumulus, with higher tops in the Carolinas.

On a day with mostly build-ups, the visible satellite image sometimes offers more details. This shows a lot of cumulus, but no organized walls of convection—at least not yet.

This seems to be concern number one, so you glance at the Convective SIGMET graphic. As expected it shows a chance of storms all over the Southeast, but the actual SIGMETs are not along your route.

The short-term convective forecast mostly agrees, with the forecast areas for serious weather south and east of your route.

This isn’t usually a big concern in the summer, but since you might be going high today to avoid build-ups, it’s always worth checking. Fortunately the freezing levels are pretty high and the only area of forecast icing is east of your route.

Conditions at your departure airport (PDK) are IFR, with multiple layers and mist. The forecast has lots of colors, including the chance for thunderstorms.

The only PIREP along your route is right over Atlanta, and it suggests you can get on top fairly soon.

At Louisville, the weather is excellent but the TAF does mention a chance for storms.

You’d really rather fly home this afternoon and avoid the hassle of spending the night, but you’re disciplined enough to know that’s always a possibility. It’s a hot summer day and the clouds are building; there are already storms in Georgia and Tennessee. But there seem to be some holes and you have a high performance airplane that can get you above the haze layer.

Are you firing up the Bonanza or cancelling? Add a comment below.