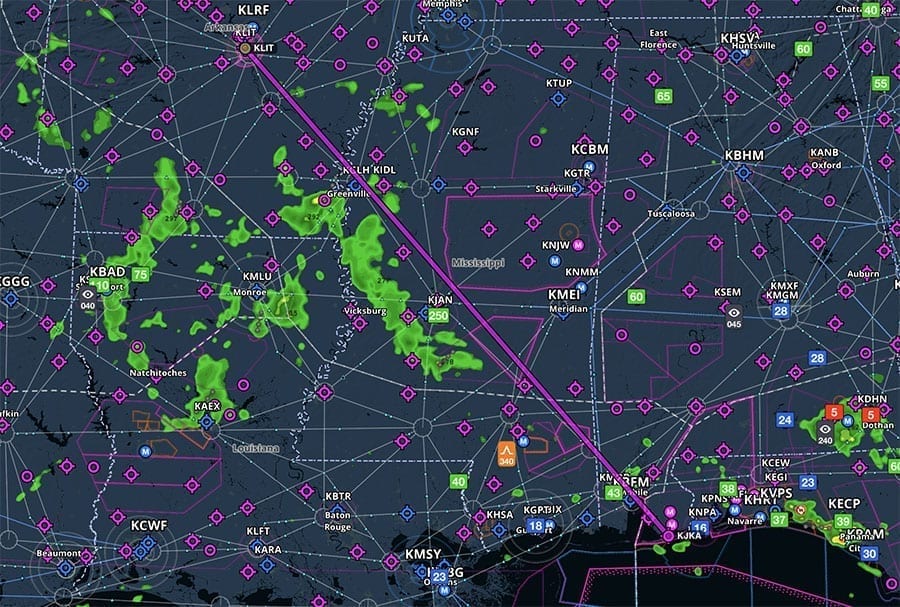 After nine weeks in quarantine, your family is ready for a visit to the beach. It might involve more quiet walks and fewer packed restaurants this time around, but in your Piper Saratoga, the beautiful beaches of Gulf Shores, Alabama, are only two and a half hours away. Will the weather cooperate?

Your Saratoga is well equipped, with dual GPSs, SiriusXM weather, and an autopilot, but you are not instrument rated so the flight will have to be VFR. Proposed departure is 1900Z (2pm local), and your route will be from your home in Little Rock, Arkansas (LIT), to Jack Edward National Airport (JKA) in Gulf Shores. Read the forecast below and tell us what decision you would make: go or no go.

The map on ForeFlight doesn’t look too bad at first glance, with mostly green METAR circles and just a few rain showers west of your route.

The surface analysis also shows no major fronts or areas of low pressure. It looks like there is some type of mild disturbance over Mississippi, which is probably creating those rain showers.

The prog chart for this afternoon shows scattered rain and thunderstorms along the Gulf Coast.

The forecast for tonight shows more of the same, with a chance for storms. Not great, but not surprising for June.

The regional radar image shows mostly rain over central Mississippi, but there is some convective activity near Alabama and Florida. Right now it’s very scattered, but is it building?

The infrared satellite shows no major lines of clouds along your route, except for a few higher ones west of your route.

The visible satellite image shows the same big picture, but with typical summer cumulus filling in as well.

As you would expect for a late spring afternoon in Alabama, storms are in the forecast. Right now the convective SIGMET map shows only an outlook for the Florida panhandle, not an active SIGMET.

On the good side, there are no other AIRMETs in the area—for turbulence, icing, or IFR conditions. Likewise, Pilot Reports are pretty sparse around the Southeast US.

The clouds forecast chart shows mostly clear skies along your route and to the east, but there are a few lower clouds near the coast.

Little Rock weather is great right now, and forecast to stay that way throughout the afternoon.

En route, conditions are good VFR, even under the areas of rain in Mississippi.

Your destination, on the other hand, is showing a lower cloud layer. It’s VFR, with good visibility, but it’s not great VFR. The TAF, for nearby NPA (20 miles east of JKA), also shows a whole mess of contractions—mostly for rain and storms. However, it does show a 3,000 foot ceiling and good visibility during your ETA.

In terms of nearby weather, Mobile (25 miles to the northwest of JKA) is showing better weather, with that lower layer of clouds scattered.

Flying with the famous and infamous