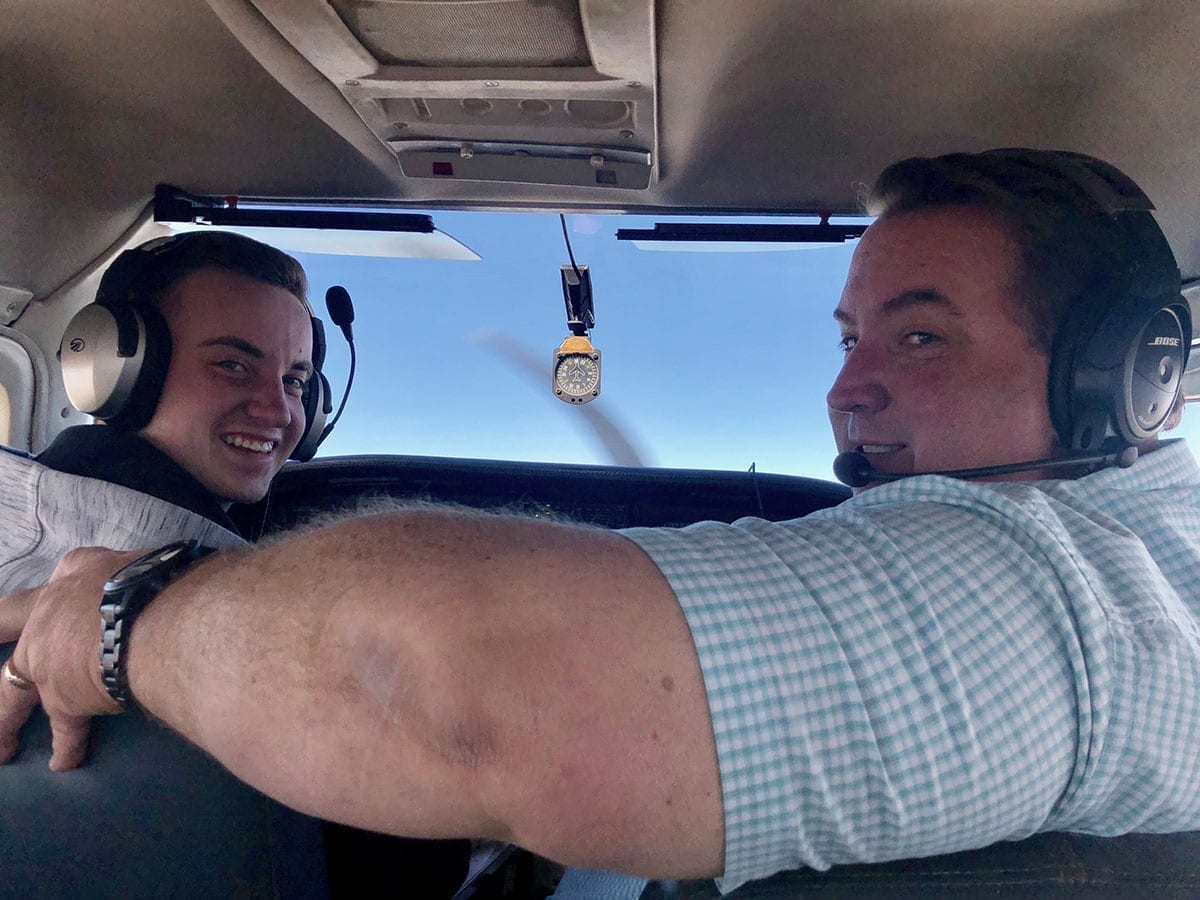 Editor’s note: This article was the winning entry in the second annual Richard Collins Writing Prize for Young Pilots. After reading dozens of entries, all our distinguished panel of judges (including Richard’s son) selected Chandler Webb as the winner of the $2,500 award. We hope you’ll agree that this article is a fine tribute to a great writer and pilot.

At first, I thought we were never going to even leave the house. Scents of burned hair filled my nostrils when I entered my parents’ bathroom, trying to see what the holdup was. My mom was running late curling her hair as my dad was stressing and running around the house worrying about all the things we might be needing for the long cross-country flight we were about to embark on.

I sat my dad down and we went over the game plan once again. The flight was from Benson, Arizona, all the way up to Aurora, Oregon. This would be the longest flight either of us had ever been on. We checked weather along the route using ForeFlight, got a weather briefing from 1-800-WX-BRIEF, checked fuel prices, planned out our descents, and obtained all the required frequencies for the controlled airspace we would go through. Everything was set as far as the plan went. Weather was going to be beautiful and the winds were slightly in our favor.

About an hour later we were airborne. I was left seat for this flight and was acting as pilot in command (PIC) for the day. My dad was in the right seat, as he was also a private pilot just like me. Unfortunately, my mom was crammed into the back seat with all our luggage. We tried making her as comfortable as possible by wrapping her up like a little burrito with several blankets. However, in the backseat of our 1978 Cessna Skylane II, there were openings all around that let in freezing drafts that blew all around the backseat.

Up at 10,500 feet MSL, it can be quite cold. At one point she told us to look back and see what she was up to. She would move the microphone of her headset from her lips and blow hot, moist air. We all laughed together as the moisture from her breath filled the cabin and covered her window in condensation.

Talking to my dad before the flight, I had wanted to stop around every three hours. That way we would never have to worry about running low on fuel and risk being “that pilot.” Our first stop was supposed to be at Henderson Executive Airport, just south of Las Vegas, Nevada. As I was about to start my descent, my dad said, “Let’s just keep going; we’ve got plenty of fuel and the wind has been treating us well.”

I thought about it, looked over at the fuel gauges bouncing back and forth around a half tank. Then I mentally figured how long it would be to our next stop and thought it might be a little bit risky trying to make it all the way there. Doable, yes. Comfortable, no. I decided to listen to him and just continue on our way.

A happy customer in the back… for now.

We were just south-southwest of a little tiny town called Tonopah. The fuel gauges were now bouncing between below a quarter tank and below half a tank. I knew we had enough fuel, but what was up ahead was not looking good. There was a thin layer of wispy, white clouds below us that allowed us to see the ground, so we continued. This lured us into a false sense of security that it was going to stay that way.

But as we kept cruising along fat, dumb, and happy, the clouds started to rise gradually. I started a nice, gentle climb and thought nothing of it. After a while, I realized I could no longer see the ground and started to get a little panicked on the inside. I didn’t show it as I didn’t want my mom to worry.

My dad, on the other hand, was not as good as hiding it as I was. You could see small beads of sweat starting to drip from his forehead. He started to look around desperately for the ground but we were on top of a pretty thick layer now. All of a sudden the clouds rose much faster than I had thought they would and we were in the clouds—zero-zero.

A week prior, I was supposed to have taken my instrument rating checkride. Due to spring winds down in Arizona, I decided to call it off and reschedule. I had been attending a flight school and met all the requirements and was ready for the checkride, which gave me a sense of confidence in this moment of entering the clouds. I started the scan and started talking out loud about everything I was doing and what was going through my mind. Just as I had been instructed to do throughout my instrument training. I continued a climb, knowing there were clear skies above, as we could see blue every now and then.

About 10 minutes in the clouds there was a change in the frequency of the air flowing around the airplane. My dad and I both peered out the window to find ice forming on all the small surfaces: struts, wing jack points, antennas, the pitot tube.

The pitot tube. Instantly, I reached for the pitot heat and several seconds later caught a sigh of relief as I saw the small chunks of ice melt away and fly off the aft end of the pitot tube. Five more minutes passed and we broke out on top of the cloud layer. The plane was not acting like it normally did and we were now at about 13,500 feet MSL. I was very uncomfortable and this is when I made the mistake of looking at the fuel gauges. We were indicating below a quarter tank now. Panic crept in as I realized we were going to be descending through those ice-forming clouds with or without an engine.

Not what you want to see on a VFR flight.

After about 15 minutes of being on top of the clouds I saw a small hole in them, from which I could see the ground. I immediately aimed for that hole and started spiraling down. Some people may say it was a coincidence, but I believe there is no such thing. Just below those clouds—just below that small opening—was a small airport that had self-serve 100LL. Yerington Municipal Airport.

After landing, the airplane was dripping wet from all the ice that had formed. I was amazed that it was still flyable with so much weight and drag.

We quickly hopped out of the airplane and went straight to the pilot’s lounge to debrief and contemplate what had just happened to us. I looked at my dad and said, “I’m sorry. I shouldn’t have let that happen and I should’ve landed when I saw the clouds rising in front of us.”

His reply was something I’ll never forget: “Don’t ever let anyone or anything keep you from being the pilot in command. The safety of that flight depends upon you and no one else can make the decisions for you.”

We sat in silence for a while after that and in my mind I thought about what pilot in command actually meant and how I had let it slide so many times through that flight because I was the “kid.” I was just trying to be obedient to my father and make him happy and make my mom feel comfortable and safe.

Several lessons were learned from this flight. I won’t go into detail about all of them. But there’s one that stuck out the most and that I will always remember: never again will I let anyone question my authority as the pilot in command. Chandler Webb
Chandler is a 21-year-old commercially licensed, multi-engine and instrument rated pilot working towards his CFI, CFII, and MEI. He is also the 2020 winner of the Richard L. Collins Writing Prize for Young Pilots, and has since moved home from Oregon to be with his family and keep the aviation dream alive. Chandler is still super thankful for the opportunity and the ability it gave him to pay off some student loans from attending flight school. He is currently looking at being hired on as a freight pilot for UPS, and is looking to get his A&P certificate within the next couple years. Loving life and living the dream!

Flying my simulator during quarantine

Friday Photo: a road in the clouds
Scroll to top