Blog - Latest News
You are here: Home1 / Article Archive2 / John's blog3 / Thunderstorms and ATC – how to get from A to B when direct isn’t... 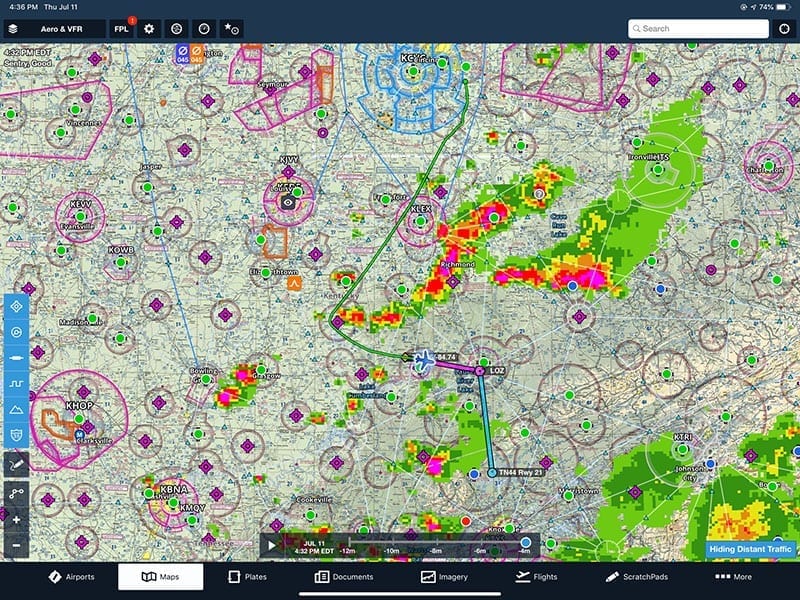 Summer is my favorite time of the year to fly. The days are long, the kids are out of school, and there are adventures to pursue. I even love the hot weather. Unfortunately, that heat leads to the one drawback of summertime flying – thunderstorms. No other weather phenomenon disrupts more flights or causes more stress than those towering gray cumulonimbus clouds.

The good news is technology like datalink weather has made it a lot easier to manage convective weather. With ADS-B on my iPad or SiriusXM on my panel, it’s fairly simple to avoid the worst weather; it just takes patience and discipline to go all the way around it. Since most of my cross country flights are IFR, those long deviations require a lot of coordination with Air Traffic Control. Hence, safe and efficient summertime flying is really about putting these pieces together.

The pilot is in command

ATC radar can help, but its main job is to separate airplanes, not paint thunderstorms.

Consider how the balance of power between pilot and controller has shifted over the last 20 years, though. Once we were lucky to have a Stormscope on board, so ATC was our main weather resource. When presented with a wall of clouds, it was common to ask approach or center, “What are you painting out there?” The answer was sometimes thoughtful and detailed, sometimes curt and useless, but ATC was still the oracle.

Today, with datalink radar in almost every cockpit, pilots have as much (if not more) information than ATC. Approach control uses live radar to depict weather, but the radar is designed for aircraft, not precipitation (see the image at right and you’ll notice how unimpressive the display is). It’s certainly a tool to consider, but it’s not as effective as a full NEXRAD picture. Center usually has a more detailed radar image that looks a lot like the datalink radar pilots see in flight, but the controller’s primary job is still aircraft separation, not weather forecasting.

That means pilots need to set the agenda, and not wait for ATC to make a suggestion. If you see a solid line of red on the radar screen or even towering clouds out the front window, make a plan to avoid them early on and be proactive about sharing it with the controller. While it may sound arrogant, the pilot in command should tell ATC what they want to do, not ask permission. The point is not to be bossy, simply to set the proper tone: “I need to deviate for weather,” instead of, “I’d like to deviate if it works for you.” In my experience, almost all reasonable requests are granted. In fact, I’ve had two deviations refused in 25 years of flying, and both times ATC offered a reason why they couldn’t do that and suggested an alternative.

I like to start open-ended with the request: “Left deviations for weather” instead of the more specific “20 degrees left.” I’m not always a great judge of the correct heading, so a little flexibility is helpful. Often ATC will grant a blanket clearance to deviate as much as needed. In busy airspace you may not get that much leeway so if the controller asks for specifics, be ready with a realistic but conservative answer. If the deviation is going to be a long one, I’ll often change my flight plan route; instead of asking for 30 degrees right for 80 miles I’ll add a VOR or intersection and make a dogleg out of it. In general, this works well for ATC since they can put it in the computer and pass the plan along to the next sector.

Three points of etiquette will help you sound like a pro when asking for that deviation. First, be friendly and succinct. If you’re deviating, there’s a very good chance other airplanes are too, so cut the controller a little slack; assertive is fine but aggressive is not. Secondly, make sure to ask early. Some requests will require coordination with another sector and that takes time. If you only give the controller 15 seconds to approve your turn, you’ve set yourself up to fail. Finally, be flexible on altitude if possible, as sometimes a deviation can be approved only if you climb or descend.

A recent trip from my home base at Sporty’s (I69) to Norris Lake in Tennessee (TN44) was a perfect example of pilot and controller working together. While my departure airport and destination airport were both showing relatively good weather, a solid line of summer thunderstorms was draped across our route of flight. Flying a normally aspirated Cirrus SR22, there was no chance of topping this weather so we had to go around – all the way around.

While the radar screen was ugly, the plan was simple: stay visual and avoid all the bumpy-looking clouds, while using datalink weather to maintain a sense of the big picture and ensure we always had an out. This is what I can “fly to the blue sky” navigation – I simply took what Mother Nature gave us, even if that meant a 50 degree right turn. It’s really easy as long as you don’t get impatient. The key step that some pilots ignore is to clue ATC into your plans.

Sometimes you just have to go around the weather – all the way around.

As soon as I checked on with Cincinnati Departure, I explained our plan and told them we would probably be flying at least 40 degrees right of course for 75 miles, then turning all the way back to the east, then turning south again. That was immediately approved, and the controller thanked us for the details: “Just tell me what you need and we’ll work it out.” He coordinated a handoff to a neighboring approach control and even suggested a shortcut as we came around the edge of the worst line of weather. In situations like this, there is no formal procedure in the AIM, so it’s best to simply talk like a human. Don’t overthink it.

In the end, the trip to Tennessee was totally uneventful, and we stayed in VMC until the last five minutes of the flight. That highlights the key to flying around thunderstorms in piston airplanes: stay visual if at all possible. That definitely gives you more information than ATC, and keeps the flight comfortable for your passengers.

When to take ATC’s advice

Of course pilots aren’t all-knowing weather gurus, and there is an important caveat when it comes to telling ATC what you’re going to do. I first try to determine if ATC has a good feel for the weather that day and if they have their own plan. Experienced controllers in busy airspace are often a step ahead of you, so it pays to listen with an open mind.

You’ve probably noticed that in recent years ATC is very robotic about warning of moderate or extreme precipitation. This is a procedure change instituted after the Scott Crossfield accident in 2007, where the NTSB faulted controllers for not mentioning the severe weather in the vicinity of the famed pilot’s Cessna 210. In most cases, the warnings simply confirm the obvious, but it’s worth listening after the boilerplate as good controllers often add their own opinion or a suggested deviation.

On a flight to Orlando last year, I was confronted with an iPad screen lit up like a Christmas tree. Thunderstorms were popping up all over the state of Florida, seemingly growing by the minute. As we flew down the east coast of the state, I thought I saw a gap well to the west of our route. The Jacksonville Center controller said he would approve the deviation, but he had a better idea if I’d like to listen: for the last hour he had been funneling airplanes down the coast and coming in the back door by Titusville. The rides were good and there was a gap that was not closing up. The plan sounded reasonable to me and the level of detail clearly showed the controller understood the situation, so I accepted. Critically, ATC was offering an idea, not pressuring me.

ATC does a great job of routing airplanes around storms – but remember you are PIC.

As we got closer, Orlando Approach did a masterful job of providing vectors around the storms. Before I could ask for a deviation, I was issued 10 degrees right, then 20 left, then 20 right and cleared for the approach. It was like a symphony conductor bringing order out of chaos, and we threaded the needle with hardly a bump – these guys do this every day in Florida, after all. With great controllers like this, flying is a matter of “trust but verify.” I followed ATC’s plan, but I backed it up with the datalink weather picture and the view out the window.

Working as a team

Timely and honest communication is the key to good relationships, whether it’s your spouse or the controller on the other end of the radio. Both sides have to have the whole story for the plan to work, and since ATC only has radar, they need all the additional information you have access to (cloud tops, ride conditions, etc.). These don’t always make it into a formal PIREP, but they’re very useful for planning the next flight through that area. If there’s time on the frequency, share some details about how your deviation worked out – the next pilot will thank you.

Flying around thunderstorms is all about flexibility and patience. That magenta line is just a suggestion, so don’t get locked into a direct route if the weather doesn’t allow it. And no matter where you deviate, always have an out. This advice is so common as to be cliche, and yet it’s absolutely true. Never let a controller or a passenger talk you into closing off your escape route or your guaranteed VFR airport. In fact, when the weather is really changing rapidly, I like to have two outs. It’s critical that you don’t just check the box, either – safe weather flying means having a real out that you are prepared to use, and continually monitoring it as conditions change. That abandoned airport on the side of a mountain doesn’t count.

It’s easy to let a colorful radar map ruin your summertime flying plans, but force yourself to go beyond the national NEXRAD picture during preflight. Remember the requirements for a safe deviation: if you’re dodging buildups in Florida, you don’t need an 80-mile gap; 20 miles is plenty. That looks safe from the cockpit of an airplane, but it looks tiny on a national radar image. Instead of canceling at the first sight of red cells, find a route that goes all the way around, then work as a team with ATC to do it safely.

Six things I know about flying in New York

Friday Photo: sunset over a grass strip
Scroll to top