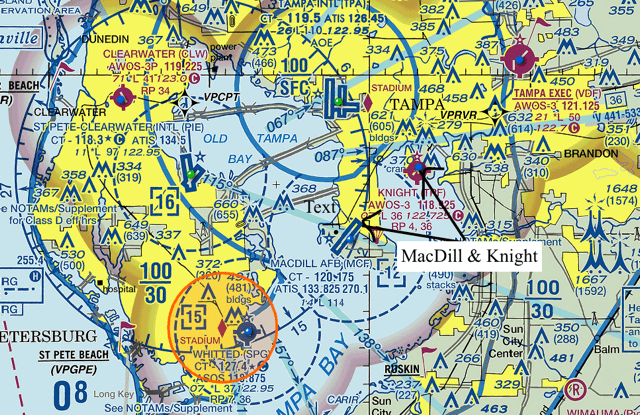 To begin with, this is not an actual bite inflicted by a slithering, legless reptile. Those can range in severity from requiring a bandage and some mercurochrome (remember that?) to potentially fatal.

The other kind of snakebite is a sailing term among owners and crew of small yachts that probably originated in Southern California.

It means that thing you’re looking for is right in front of you.

Here are some examples of the small print variety:

Small print may appear in airport diagrams, charts, checklists (aren’t those all small print?) and may indicate restricted airspace, aerobatic area frequencies, compass deviation numbers (in the cockpit), the Kollsman window, and so on. The FAR/AIM is loaded with it. It’s best to read the fine print and be aware of it, especially if your route takes you through “fine print areas.”

I fly through the Santa Paula aerobatic area often and that frequency and the area’s protocols are part of my en route check.

Example 2: I should be here (geographically) but where’s the [fill in the blank]? I did my night cross-country with my CFI and according to the VORs, and all manner of GPS-less navigation, I was supposed to be right over Camarillo (CMA). Finally, looking as straight down as I could, I saw CMA, and it was lit up like a Christmas tree.

No harm, no foul. I didn’t have to land there. It was a waypoint. I like to fly over airports. Trust your nav instruments, if the FBO, local CFI or your IA says they’re good to go, chances are even primitive ones (one of my favorite rental aircraft is placarded VFR only) will put you where you expect to be. Go over your route with someone who’s flown it if it’s your first time. If you’re lost, remember your four C’s: climb, communicate (with ATC), confess and comply.

Example 3 (illusory): This can perhaps best be explained by fatigue, confirmation bias, distraction, information overload or lack of preparation. Or all of the above. A British Airways flight recently landed in Edinburgh, Scotland, rather than Dusseldorf, Germany. Harrison Ford landed on the taxiway rather than the runway at John Wayne and a military C-17 touched down at Peter O’Knight GA (KTPF) rather than MacDill AFB in Florida. You wonder, “How in the wide world of sports?!” Could this be absent-mindedness? Not too much of a problem on the ground, but in the air it can be serious.

Perhaps the British Airways flight had elements of the small print variety and confirmation bias since the flight plan indicated Edinburgh, and the crew concluded that was the destination.

Not being a psychologist, I can only suggest: PAY ATTENTION. Check your route frequently; if you have a passenger, get some feedback on landmarks. Another time I was in the plane with the CFI and, after climb out and a few minutes of cruising, I said, “I don’t know where I am.” He calmly said to look around and check landmarks and see how they relate to the chart. I saw the freeway, a reservoir and some familiar-looking structures and was able to determine my position within a half-mile or so.

A simple but embarrassing mistake.

Beware of fatigue. It’s a condition that deceives you into thinking that you’re OK but in reality you’re not firing on all cylinders, and the mental and physical deterioration is not linear, it gets progressively worse.

The pilots in these examples are all skilled pilots with many hours; they landed without incident and only suffered reprimand and embarrassment. Getting the C-17 out of KTPF required a massive amount of onboard logistics, especially when it came to weight and balance. It makes me wonder how the military pilot mistook the tiny runway at KTPF for MacDill.

Parallel runways add a flavor to the mix. I was flying with a buddy when he lined up on the wrong parallel runway but caught it in time when reminded by ATC. I was taught years ago to take the heading indicator and turn it (transform it) to a virtual horizontal surface over the area outside the cockpit. This imaginary horizontal compass picture combined with the ATC assignment has helped a lot with orienting position, traffic legs and traffic pattern direction. One of our pre-flight mandates is to gather all the information we can about the destination airport. A chart that is easily accessible is a big help if the route is unfamiliar.

Example 4: Hearing. Mistakes stem from information overload (that again), pre-occupation, or distraction. In the case of ATC, I responded to instructions by saying, “Turn two-four-zero degrees, Cessna 123.” ATC responded, “Cessna 123 turn THREE four zero degrees.” From my prior heading of 270, 240 seemed more logical. Confirmation bias? Did I hear 340? Perhaps in the case of hearing, it’s best to request ATC to please repeat again slowly.

My experiences with audio snakebite mostly involve taxi instructions. Perhaps it’s best to ask for progressive at more complicated airports. Concord (California) Buchanan is a prime example. There are others that are deceptively simple and Camarillo (CMA) fits this category.

My last example is, “What did I come into this room for?” While this may not represent an aeronautical instance, it may apply if you walk into the oil shed and forget to bring back the quart of oil. Distraction and pre-occupation run deep here.

Little reminders can help this condition: if the plane needs a quart of oil, I leave the cowl lid open until it’s added.

More serious is an interruption or distraction while performing pre-flight or checklist. Where did I leave off/complete?

It’s best to put one’s game face on. When I take the helm of a boat, I put the virtual captain’s hat on with the intention that I am responsible for the welfare of the vessel and its passengers. I am doing exercises to increase memory (crossword puzzles) and consciously practice scanning and spotting here on the ground. I tell myself verbally: PAY ATTENTION and know that flying for any length of time in crowded airspace, especially abutting Class Bravo, is very fatigue-inducing and is a serious source of information overload.

Pay attention especially around an airport, get plenty of rest, put the outside (non-airplane) world on the shelf and be flexible to ATC commands. If the runway you approach is not the one intended, execute a go-around and ask ATC to clarify.

Don’t get metaphorically (or physically) snake-bitten.