Blog - Latest News
You are here: Home1 / Article Archive2 / Go or No Go3 / Go or No Go: summertime storms in Mississippi 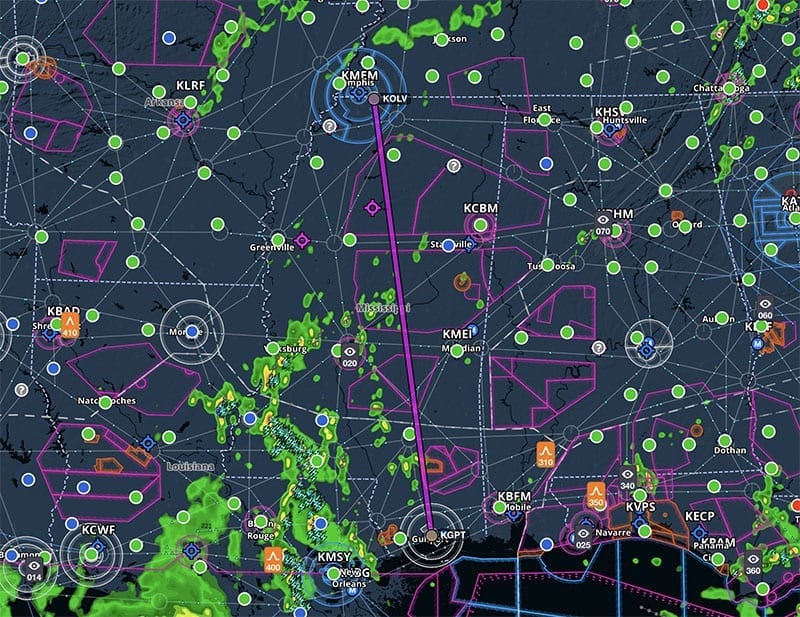 It’s been an active week for weather along the Gulf Coast, with summertime heat and humidity settling in for the long haul. But after a weekend of training in Gulfport, Mississippi, it’s time to head home to Memphis, Tennessee, in your Cessna 182. The weather map is cluttered with storms, and it’s forecast to stay that way most of the week. There may not be a perfect day to fly, so the question is whether there’s a flyable window.

As you open up ForeFlight around 1730Z, here is the weather situation. Read the details, then tell us if you would make the flight (proposed at 1800Z), which should take just under two hours in the 182. If you would fly, tell us what route; if you wouldn’t fly, tell us why not. You are instrument rated and current, but you don’t necessarily have to fly IFR.

There are plenty of storms on the map, with a large wall of convection to the west, with more scattered cells to the north.

The surface analysis shows the big picture, which is basically a stationary front north of your route and a weak low off the coast of Texas.

The prog charts show the same basic trend for the next 24-48 hours, with scattered showers and storms all across the Southeastern US.

As the forecast period moves along, the rain never really goes away.

Even tomorrow morning, the rain and storms are forecast to remain, although perhaps they’re slightly further east.

These two products will tell most of the story today. The static radar image is actually pretty clear, but there are pop-ups starting to appear.

The infrared satellite shows building clouds to the west, but relatively clear skies to the northeast.

The visible satellite picture is a valuable tool today as well, and shows additional detail around the building cumulus to the northwest.

Since thunderstorms are the main threat today, it’s worth digging into all the forecast tools. It’s no surprise there’s a convective SIGMET across Mississippi.

The CFM product, available in ForeFlight’s Imagery tab, shows about what you’d expect, with storms all across Mississippi.

The same basic shape remains as the day goes on, with storms forecast along a southwest-to-northeast line.

Finally it’s time to read the METARs and TAFs. The weather at your departure is marginal VFR right now, with a broken layer and gusty winds. The TAF shows a chance of thunderstorms this afternoon, under VFR skies (better than actual right now).

Your destination is solid VFR and forecast to stay that way, although thunderstorms are forecast this afternoon and evening.

Time to decide whether you’re launching or not. The weather along your route certainly isn’t clear, but there seems to be a solid out to the east if things go wrong. Tomorrow doesn’t look much different, so if you’re flying home it’s going to be a matter of choosing your timing. But it may be a good day for staying visual, and your departure airport is not great for VFR right now.

The Lucky Lubbock Lads at Lowake and Lessons Learned Therein