Blog - Latest News
You are here: Home1 / Article Archive2 / I was there3 / Military flybys: rules and mistakes 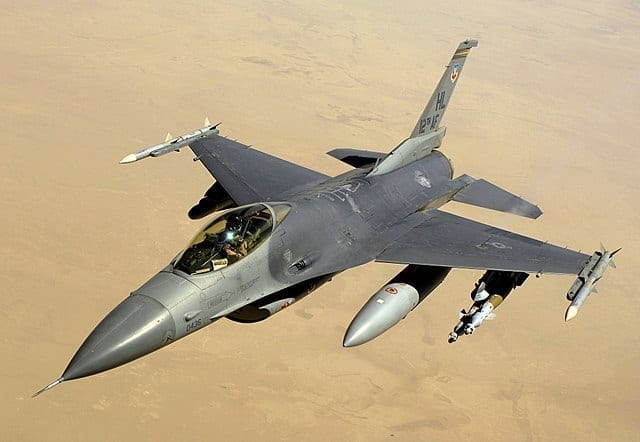 I have been flying small, complex planes like Mooneys for almost 40 years. For over 30 years, I have lived on a low-level military flight route. Twice a month, an F-4 would buzz our lake. Now it is KC-130 tankers high in the sky or a few Chinooks thundering across our lake. They can’t sneak up on you like an F-4. I have had five military flybys in the air as pilot in command. Every flyby makes my day better; some even make a life time memory. Here are a few.

My first in-air military flyby was over 25 years ago on a flight to Centennial at Aurora, Colorado. I flew there once a month for a number of years. This time, I picked the wrong body of water as a landmark, so I was too far north. ATC called to ask me to look at my right wing and tell them what I saw.

Which was: Buckley Air Force Base and an F-16 sitting on the runway, burning jet fuel, waiting for me to clear his airspace.

Not the view out the window you want to see.

ATC told me to hold this heading, maintain this altitude and monitor this frequency as the F-16 had a message for me. The F-16 took off and flew a complete 360 around me about a mile out. ATC called me and asked. “Did you get that message?” I responded that I heard every word.

About that time, a T-38 went straight up past our nose on the right side of the road about, a mile ahead of us. ATC asked, “Did you get that message they just sent you?” I responded, “I heard every word, loud and clear.” We were flying about 7,500 VFR that day, and the T38 went straight up, out of sight in no time.

A few years later, again over Kansas, we were flying, about 3000 feet AGL. ATC called and said, “Hold [this heading], maintain [this altitude], [speed] and monitor [this frequency]. Traffic is about to overtake you.” We were VFR, didn’t see any traffic but we were looking. I had a retired Air Force vet as my copilot.

ATC called, “Traffic one mile and closing, 6 o’clock, 1000 feet below you.” I responded, “Negative contact.” Of course, we were looking back and up for a faster plane. We watched as the mighty B-52 flew directly under us. I could have landed on the wing of this majestic bomber. My copilot served on a B-52 SAC base for four years and loaded live bombs on B-52s. He did much more than that, but I can’t tell you what here. That made our day and was the best flyby until two years ago.

This same copilot and I wanted to visit my son and fly over the “Boneyard” at Tucson, Arizona. We needed permission to fly over the Davis-Monthan Air Force Base to see well over 2,000 military planes of every type in row after row, very impressive to see in person.

I hadn’t flown PIC in six years, but now had the time and means to fly again. I was a little rusty. This was only my second long cross-country flight in my new-to-me 1967 M20F Mooney, and I was still getting used to that bird. It was also my first PIC flight over the mountains. The views from 12,000 MSL yet only 200 AGL were otherworldly.

It was the week before the Super Bowl 2017, and we had been on the Tucson Air Force Base and heard they were going to use the Blackhawks and A-10s that year to protect the event. Their concern was small, slow aircraft like mine – hard to tell the difference from a sightseer or a bogy.

I have immense respect for our military, knowing they take their jobs very seriously. They follow their orders. At the age of 19, I felt rules were meant to be broken. Learning to fly transformed my thinking about rules. Now rules are there to protect us and even save our lives.

We had a week of perfect VFR weather; this day may have been the best for sightseeing. During this flight, I made a few simple mistakes when entering military airspace: turning at the wrong time and my transponder was not on at first. I had the full attention of the military tower and had already put up enough red flags to force him to take action. First impressions are important and I just blew that.

He politely told me we needed to do a 180 to the left and leave his airspace. I complied, then noticed my transponder was on standby and I switched it to “on.” He then called me back to see if we wanted to return – very nice of him. The military tower told me that I must follow each instruction to the letter from now on or leave his airspace for good – his version of three strikes and you’re out. You don’t say “I’m sorry” to a military officer. They need to hear, “I understand completely” or simply, “Yes, sir.” They also don’t need or want to hear your side of the story; they have their orders.

Davis-Monthan Air Force Base is a huge facility.

The military tower vectored me to the northwest end of the air base and said, “Fly parallel to runway 12. Do not cross over the runway.” (It is a mammoth runway, over 13,000 feet long.) “Proceed to the very end and expect further instruction.”

You may think, as my copilot did, that it just happened that there were two A-10 Warthogs just sitting side by side as we came up on the runway. We turned to fly parallel to the A-10s’ flight path as they started their staggered takeoff roll, beating us to the runway’s end.

Now my copilot said, “Get a load of this.” I said, “They want us to see this; one more mistake and these A-10s escort us out of their airspace.” At the runway’s end, the A-10s doubled back over top of the taxiway in a maneuver that even Maverick could not have performed in Top Gun. I had no idea such ugly planes could do such a graceful, synchronized maneuver on the deck like that. These fighter pilots make a crop duster look like a student pilot. My copilot now sounded like Goose: “They’re coming around behind us.” I got the message loud and clear.

By now, I was sure they knew my name, my password and were reading my emails. I just needed to keep cool, follow the rules and let these guys train like we were flying near the Super Bowl. I’m sure their commanding officer said this woud be good practice.

Don’t kid yourself – they are protecting their home base. We were in their airspace, and they make the rules here. I didn’t even bring a knife to this gun fight, so I was totally OK with that. Now the A-10s were behind us and the military tower vectored us left over the boneyard and then the graveyard. For some reason, these words took on a new, even surreal, meaning.

The military tower now asked us to come back and fly over it all again, said we did such a fine job, “willing” to let us have a second pass. They must have liked my emails. I was guessing he wanted us to turn around and see the A-10s. We decided to fly on to El Paso, and check on Trump’s wall construction, if any.

The military tower now asked, “Are you sure you don’t want to come back again?” telling us what a fine job we did. He was either very kind or playing with us. In my teenage days, this would have been a challenge to me, might have even pushed it too far, spent the night in chains, after enjoying a free cavity search, but today I was not at all happy with the simple mistakes I just made in military airspace.

I also felt a little out-gunned and I needed to work on my checklist to get my confidence back. So we still refused. His last call was, “Would you like flight following to El Paso?” I was not sure if that was his version of an A-10 escort. I informed the military tower that we requested to resume our own navigation as we were just sightseeing.

ForeFlight on my iPad showed a plane or drone flying 1000 feet below us for the next 100 miles. This does happen – most of the time ForeFlight is tracking a ghost of your own plane. This was the first time and last time I have noticed this, and it had me thinking after what we just went through.

The mountain ahead of us had the perfect “U” to fly through. We cleared the base of the “U” by 200 feet, with the top of the “U” 100 feet or more over our heads with maybe 200 feet on each side. The only plane going thru that “U” was us. We lost whatever was under us at the “U” and I have never seen a ghost plane again. We were able to pull a tail number off ForeFlight and it was an active tail number from Oregon. There was no crash below us so it was a ghost reading of some kind. Strange timing.

We enjoyed time with my son in Tucson. The city has the best Air Force museum and I have been to a number of them. There are more airplanes than you can count and by far the best SR-71 and D-21 drone on display with retired Air Force personnel there eager to answer any questions you may have. Everyone including the military tower went out of their way to make us feel welcome. Just follow their rules and enjoy the view.

I have never served in the military, but I have been on many military bases. Two years ago, I drove onto Fort Riley Army Base in Kansas. My truck tags say CAPTAIN because my marina is called Captain’s Quarters. At the guard house gate, I was asked if I were a retired captain by the youngest-looking private I have ever seen. He looked 15 to me. I replied, “No, son. You outrank me in every way.” Quickly he responded, “That is impossible, sir. I work for all Americans to keep America safe.” We should all be very proud of our military. I am.

Friday Photo: Boulder from a 172

Reader question: have you ever experienced aviation nirvana?
Scroll to top