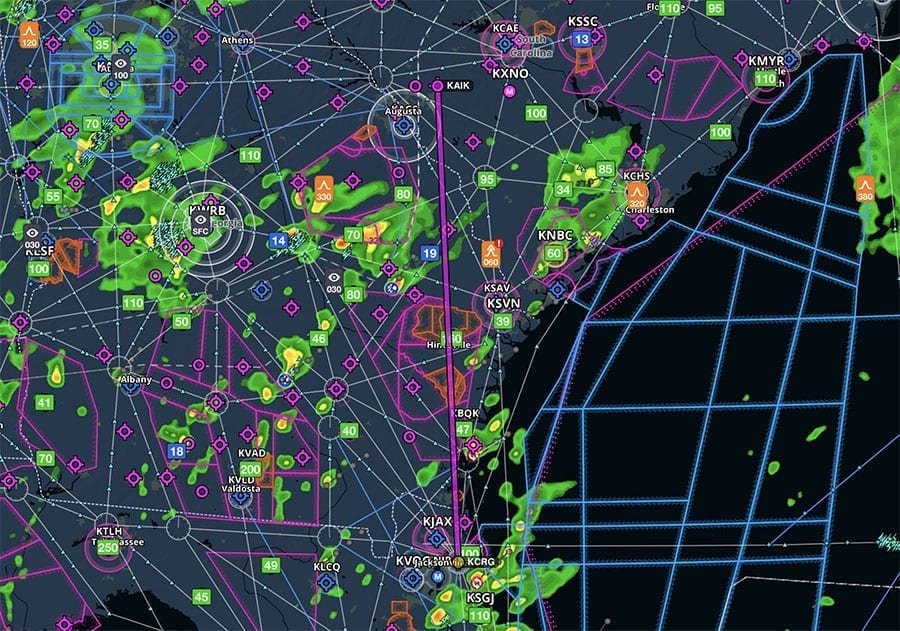 The big week is finally here – you and a longtime friend are flying to see The Masters golf tournament in Augusta, Georgia. It’s the pefect mix of fun and flying, and the trip from your home near Jacksonville, Florida (CRG), to Aiken, South Carolina (AIK) is an easy 1.5 hours in your Diamond DA40. You are instrument rated and current, and the airplane is well equipped with a Garmin G1000 glass cockpit, autopilot, and datalink weather. You were hoping to go VFR today, but you can make it IFR if needed.

As is often the case in spring, the radar is colorful. Are there enough holes in the storms to make the flight? Read the weather reports below, then tell us if you would fly the trip or cancel. Proposed departure time is 2030Z.

The view on ForeFlight shows lots of rain and thunderstorms in Georgia and South Carolina, although there are some pretty big holes along your route.

The surface analysis shows the source of all that weather: a low pressure system is moving in from the west, and a series of fronts are spreading out in front of it.

Prog charts show the system eventually moving offshore, but not until later in the day tomorrow.

The visible satellite shows some holes between those cells, although more organized storms show up in central Georgia.

As you would expect from the radar picture, there are plenty of convective SIGMETs around.

A Pilot Report (PIREP) along your route is cause for concern – severe turbulence was reported at 6,000 feet by a Pilatus. However, it is almost two hours old.

If you do go IFR today, at least icing won’t be a major concern. The freezing level is above 10,000 feet – a lot higher than you typically fly.

The METARs and TAFs are almost all good, starting with your departure airport. It’s reporting good VFR conditions, with a forecast for occasional storms and rain.

En route is also mostly VFR conditions, although one airport near a thunderstorm is showing marginal VFR.

Your destination is much like your departure airport – good VFR and forecast to stay that way except for storms moving in. Mist is also forecast to appear, but not until much later.

The radar looks bad; the METARs look good. Can you stay VFR and dodge the build-ups? Or should you punt and start driving? You would prefer to get there tonight, so driving is probably a better backup than flying tomorrow morning.

Lost over Russia in an aerobatic airplane

High mountain flying course: it takes more than a pilot license and a plane
Scroll to top