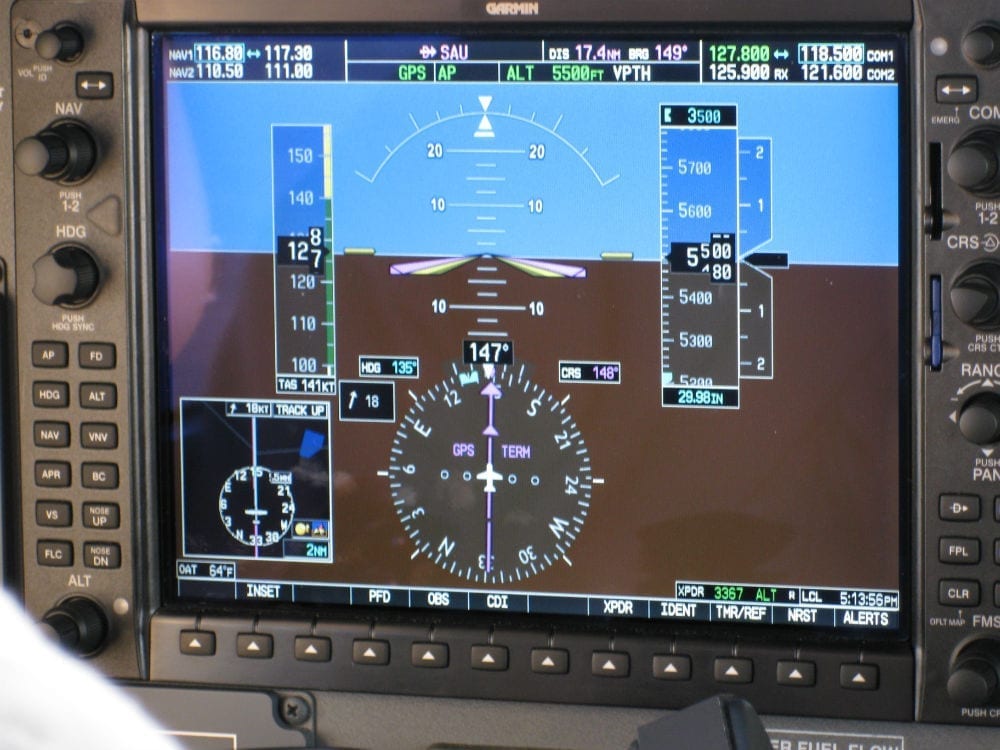 The glass cockpit is one of those technological advancements that sneaks up on you. Many pilots treat the Garmin G1000 and other such systems as if they are some passing fad, even though they have been standard equipment on new airplanes for more than a decade. In fact, glass cockpits have been around longer than the iPhone, but while Apple’s smartphone is considered an essential part of daily life, Garmin’s avionics suite is viewed with suspicion by those who’ve never flown it.

Part of the reason glass cockpits are still relatively rare in general aviation is obviously cost – $30,000 is a lot to spend on avionics when the airplane is only worth $40,000. But that is beginning to change, with new products from Garmin and Dynon pushing the price down below $10,000. As this new generation of retrofit glass cockpits makes its way into the general aviation fleet, it’s a good time to elevate the discussion about the relative merits and safety record of such equipment. Right now, the subject is defined more by hangar flying wisdom than hard data.

For example, the oft-cited NTSB study showing that glass cockpit airplanes are no safer (and perhaps even less safe) than traditional analog cockpit airplanes is now more than ten years old. The accident rate for Cirrus Aircraft’s SR series, the most common glass cockpit airplanes, has changed dramatically in that time. By most objective measures, these technologically advanced airplanes now have a better safety record than the general aviation fleet average (see chart below). Such a trend doesn’t square with the idea that primary flight displays (PFDs) are bad for safety.

More importantly, hardly any of these safety studies control for exposure – the fact that higher priced, more capable airplanes are often flown on longer cross country trips and in worse weather. Quantifying this difference in exposure is difficult, but it’s likely that, compared to a steam gauge Cessna 150, the owner of a brand new Cessna 206 with a glass cockpit might fly the airplane more often, frequently single pilot, and in IMC. Without considering this critical difference, most of the accident rates are just statistical noise.

To get a feel for the accident trends, I read every Cirrus fatal accident report for three years before the Avidyne Entegra was introduced in 2003, then compared it to a three-year period after glass cockpits were standard. Again, the exposure is dramatically different (partially because Cirrus built a lot more airplanes between 2004 and 2007), so calculating a glass vs. steam accident rate is almost impossible, but the individual accidents still offer lots of lessons. Here’s a representative sample of NTSB probable causes before the introduction of glass cockpits: spatial disorientation, poor IFR technique on approach, VFR-into-IMC (more than one), stall/spin (one after takeoff on a hot day, one by a pilot very new to the airplane).

And after glass cockpits became the norm? The causes are depressingly similar: stall/spin, low pass leading to a stall, low level formation with glider in the mountains leading to controlled flight into terrain, in-flight icing, and of course VFR-into-IMC. Buzzing a friend at 50 feet or continuing into worsening weather are bad ideas no matter what the avionics – a fancy panel should neither tempt you to make these mistakes nor be expected to save you if you do.

I did the same exercise for Cessna 172s, where the G1000 became an option in 2005. Once again, glass cockpits have not invented new ways to crash airplanes: stalls and VFR-into-IMC were common causes. With one exception (a Cirrus crashed after the primary flight display failed and the pilot could not maintain control on the backup instruments), the move to digital flight instruments does seem to have slightly reduced the frequency of accidents caused by partial panel flying since there are no vacuum pumps to fail in a G1000.

Is this a glass cockpit?

As the avionics market evolves, another question becomes hard to answer: what is a glass cockpit, anyway? A steam gauge Cirrus with a large moving map, dual WAAS GPSs, TAWS, and an autopilot is pretty well equipped, but it’s not technically “glass.” Similarly, the Pilatus PC-12 began life with 4″ EFIS tubes for the attitude indicator and HSI, plus a GPS and autopilot; the latest models include a 4-screen, flat panel Honeywell Apex system. Is the old version “analog” simply because the airspeed indicator and altimeter are dials instead of screens? How about a 1965 Bonanza with a single screen Aspen Evolution display – is it a completely different airplane with the mechanical gyro replaced?

If all this discussion proves anything, it’s that we are overthinking the whole glass vs. analog issue. After all, glass cockpits were created to make flying easier and safer, not as some conspiracy to kill pilots. The changes simply aren’t that dramatic. The wings are the same on that Bonanza no matter what the avionics are, and so are the flight controls, approach speeds, fuel endurance, and stall characteristics.

In fact, when you consider what is new with a glass cockpit, you find surprisingly little:

Sure, there are large multi-function displays, but this is not really new – Garmin 530s were around for many years before the G1000, and early Cirrus models had a large Avidyne map screen without a PFD. Glass cockpits also have HSIs, but those have been around for decades (and are a major upgrade over precessing gyros anyway).

Given those relatively minor differences, transitioning to a glass cockpit airplane shouldn’t be a stressful situation. Consider these four tips.

The key place to start is mindset: relax. It may be slightly intimidating the first time you sit in the left seat of a glass cockpit airplane, but that’s mostly because a big PFD can present much more information, including winds aloft, nearest airports, and the active flight plan. Remember that information is there to help, and you can turn most of it off if it’s distracting. In fact, you should probably start your glass cockpit flying with most of those extras turned off.

One criticism is valid: there isn’t a lot of “glance value” on an integrated glass cockpit. With a standard six pack, you can get a lot of information from the instruments without reading every specific number. If the airspeed indicator is pointing straight down and the altimeter is pointing straight up, you can assume that your airspeed is somewhere in the middle of the green arc and you’re level. Not so with a G1000 – you’ll be tempted to pause and read the exact numbers on the airspeed and altitude tapes.

Some will call this a fatal flaw, but to me it’s just a difference – one whose inconvenience is outweighed by some real benefits. If you find yourself chasing the tapes as they bounce around in flight, consider three more useful habits.

First, set the bugs on the primary flight display whenever possible. Most glass cockpits have knobs that allow the pilot to set bugs for the altitude and heading, and some even have one for the airspeed and vertical speed. These are used to drive the autopilot, but they can be great reminders for hand-flying too. If your clearance is to fly heading 270 and maintain 3,000 feet, set the bugs for those values and follow them. You’ll find it much easier to monitor heading and altitude by taking a quick glance at the bug than continuously reading the numbers on the screen.

Second, get to know how the trend lines work. These are usually magenta lines next to the tapes on the primary flight display, showing what the airspeed or altitude will be six seconds in the future. The taller the trend line, the faster the tapes will be moving, which is your clue that the airplane is not stabilized. This might be OK in a climb, but not if you’re trying to fly straight and level. Many HSIs also include a track vector, a little diamond above the HSI that shows the actual course your airplane is flying over the ground; match this to your desired course and keeping the needle centered becomes much easier. Again, the glance value is more important than the specific numbers here.

Finally, learn the most common profiles for the airplane you fly. For example, if you know that 1700 RPM and 10 degrees of flaps equals 90 knots and a 600 foot-per-minute descent, you can configure the airplane at the final approach fix and then make small adjustments to keep the needles centered. You’ll spend less time chasing tapes and adjusting power if you start out with a ballpark configuration.

Don’t make the mistake of treating all glass cockpits the same. They can vary significantly between manufacturers and even models, so you’ll want to spend some time reading the manual for the system you fly. In particular, focus on the different failure modes and the emergency checklists. For example, what does an AHRS failure look like compared to a screen failure? Are there backup options for the AHRS or the primary flight display? How long can the glass cockpit run on the backup battery? PFD failures are very rare, but a good pilot prepares for even the rare emergencies.

Understanding such nuances is especially important since not all glass cockpits are fully-integrated systems like the Garmin G1000. Many newer options, like the Garmin G5, replace a single instrument with a digital display. These hybrid glass-steam cockpits are more affordable than complete cockpits and more reliable than vacuum pumps, but it’s critical you understand which instruments are driven by which sensors.

Too many pilots exaggerate the difference between analog instruments and glass cockpits, as if it requires a completely new pilot certificate to make the transition. That’s simply not the case – the basics of flying are the same no matter what avionics you use. Focus on basic attitude flying, which, if anything, is easier on glass cockpits with their full-screen attitude display. And don’t forget to enjoy the view outside once in awhile.

Confessions of a rusty pilot
Scroll to top