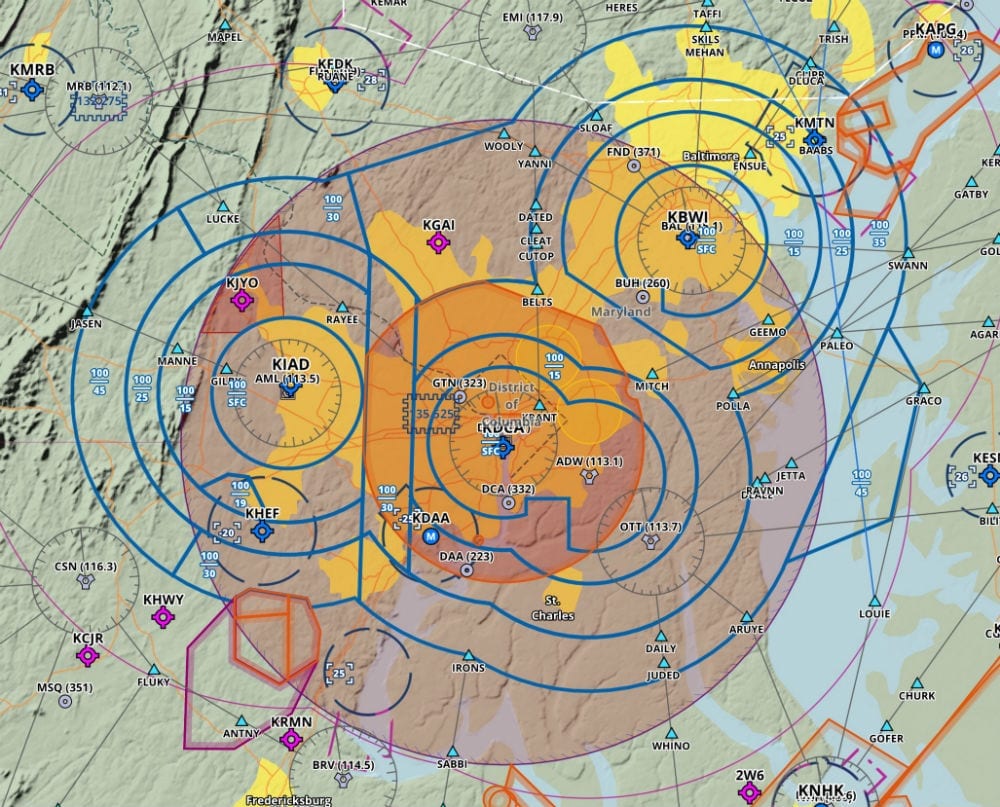 Pilots and aviation lobby groups are up in arms right now about the potential privatization of Air Traffic Control, and rightly so. Unfortunately, these same groups have been much quieter about another government-led aviation disaster, one that has happened right under our noses: the relentless expansion of restricted and controlled airspace. This trend has been clear for at least 20 years and it should enrage more than just diehard libertarians. Many pilots now worry more about airspace than weather when planning a flight – a truly sad state of affairs with serious consequences for recreational aviation.

Temporary Flight Restrictions (TFRs) are the highest profile example of America’s airspace creep, and for good reason. The current TFR system is a disgrace. The ubiquitous red circles are created with little warning, using a process that is completely opaque, and then inconsistently communicated to pilots. It’s no wonder that over 500 pilots violate them every year.

TFRs were certainly around before September 11, 2001, but they exploded in popularity after that terrible day. Soon there were stadium TFRs over football games, Presidential TFRs over campaign rallies, fire TFRs in western states, and so many more. If a disaster scenario can be dreamt up, a TFR will probably be issued.

Can’t make this up: a stadium TFR, within the FRZ, underneath Class B, surrounded by the SFRA.

It’s understandable that America’s security machine would react to such a world-changing event with new restrictions, but the resulting TFR mess was not inevitable. Consider that America managed to survive without TFRs in the wake of President Kennedy’s assassination, even though the 1960s featured a much more active general aviation sector – and many of those airplanes were flying around without transponders. The difference this time surely has something to do with the weapons (airplanes) the 9/11 attackers used, but the desire to “do something” without regard to cost or procedure seems just as important. In effect, our airspace design became subordinate to the Secret Service’s mission, which is not quite the checks and balances that America’s founders had in mind.

This haphazard approach – one almost completely without oversight – has predictably led to abuse and incompetence. Start with the misleading name. There is nothing temporary about many TFRs, including the outrageous ones over Disney in Florida and California that have been “temporarily” in place for nearly 15 years (hello “temporary” income tax of 1861). Similarly, former President George W. Bush’s home in Dallas has been protected by a TFR since 2009. The fact that such restrictions haven’t been codified in law suggests their creators know they are on shaky ground.

Another frustration is the conflicting advice from the FAA. Their TFR.FAA.gov website, which did not even offer graphical representations until they were dragged into the 21st century a few years back, still warns that “Depicted TFR data may not be a complete listing. Pilots should not use the information on this website for flight planning purposes.” What purpose does it serve if not flight planning?!

Essentially, the federal agency responsible for airspace management is admitting that there is no single authoritative source of airspace data. Pilots have to roll the dice and hope they don’t fall into an airspace trap. This has led to confusion on the part of many general aviation pilots, to the point where some simply avoid flying anywhere close to cities.

TFRs are just the beginning, unfortunately. Now there’s a new (technically back from the dead) three letter acronym to deal with: TRA. As the FAA explained recently: “The FAA will soon begin limited use of a Temporary Restricted Area (TRA) in certain areas when the types of operation(s) to be conducted there require a TRA. The flight rules that apply to a TRA are the same as a Restricted Area (RA).”

This type of circular reasoning is alternately mystifying and infuriating: TRAs will be set up in areas where TRAs are required. That gives the FAA almost infinite flexibility. These TRAs are even more obscure than TFRs, and many flight planning tools don’t depict them.

A map from the FAA on a typical day shows a mess of restricted airspace – all active or scheduled to be active within 8 hours.

Another outgrowth of the TFR craze is the Washington, DC Special Flight Rules Area (SFRA), whose inner ring, the Flight Restricted Zone (FRZ), essentially bans all general aviation traffic. These creative new airspace categories were actually set up in anticipation of the US’s 2003 invasion of Iraq, not in response to September 11. Not surprisingly though, some six years after US troops left Iraq, this 2800 mile airspace grab remains in place.

The SFRA and FRZ, just like TFRs, suffer from the same flaw that most other hastily-prepared policies do: there’s no process to evaluate the new rules and consider whether they actually work. Instead, yesterday’s power grab becomes tomorrow’s expectation. While “the FAA Administrator has broad authority to regulate and manage national airspace in the interest of safety and efficiency,” changing the SFRA/FRZ rule would require coordinating with a dizzying array of agencies, including: the Department of Homeland Security, the Department of Justice, the Department of Defense, the Office of the Director of National Intelligence, and the Department of Energy. Nobody gets promoted for taking on that task.

The pain doesn’t stop with post-9/11 security airspace, unfortunately. Another frustrating example is Class B airspace, which is almost impossible to downgrade once it has been established.

Two noteworthy examples are Cincinnati and Pittsburgh, formerly major bases for Delta and US Airways that lost their airline hub status years ago and yet have seen no change in airspace. As you might expect, the requirements for establishing Class B airspace are fairly specific: the FAA’s Order 7400.2L requires that an airport have at least 5 million annual passengers and total airport operations over 300,000 before it can be considered. Even then it’s not required. By those measures, CVG long ago fell below this standard, with airport operations dropping almost 70% between 2000 and 2016.

And yet Class B airspace persists, mostly because there is no process to change the airspace back to Class C. It’s a telling omission – no one ever considered the idea that airspace would get smaller, although methods for making airspace bigger are clearly defined.

This is frustrating for student pilots and anyone at outlying airports, but it’s also increasingly expensive in the context of ADS-B Out equipage rules. Whereas Class C airspace requires ADS-B Out avionics only within its 10-mile radius, Class B extends that airspace out to 30 miles, all the way to the ground (the so-called Mode C veil). As a result, 6 additional airports around Cincinnati and an astonishing 19 around Pittsburgh are included in the ADS-B Out requirement that would not be with Class C. That’s hundreds of airplanes and millions of dollars wasted, all because of an inflexible system.

The solution to this long list of complaints isn’t quick or easy, but a place to start would be our country’s general attitude about security-related airspace. TFRs are not new, and it’s time we stopped treating them as some stopgap measure. With more and more cities working themselves into a panic over drones, we can expect the demand for airspace restrictions to grow. The sooner we have an efficient, transparent system for changing airspace, the sooner we’ll be able to balance safety and efficiency.

More specifically, all TFRs should come with automatic expiration dates and require reauthorization – perhaps even by Congress. The neverending Disney TFRs set a terrible precedent, one that could be used by any number of non-governmental organizations.

If Disney World can create a permanent TFR, why not SeaWorld? Six Flags? The county fair?

For the airspace that already exists without an expiration date, a method must be established for evaluating and then removing those sections that no longer make sense. Perhaps we need an airspace version of the long-running Base Realignment and Closure commission, which took a systematic approach to closing US military bases made obsolete by the end of the Cold War. Until it’s someone’s job to reduce airspace growth, it won’t happen.

Even easier than that, the FAA should guarantee a centralized, real time airspace feed that is accessible to all pilots. How can a VFR pilot in a Cub be expected to avoid TFRs, TRAs, MOAs, and everything else if even the FAA cannot provide a reliable source of such airspace?

A longer term goal, one which will depend on technology as much as politicians and bureaucrats, would be to draw airspace more precisely. The inspiration here should be the new generation of RNAV approaches, which use curving final approach paths to fit instrument procedures into tight terrain. Could we use the same approach to draw smaller, irregularly-shaped airspace that covers only the areas that are essential to protect? This could end up being complicated, but if done properly the net effect might be smaller restricted airspace.

Aviation organizations are not asleep at the wheel. An RTCA group has submitted a list of 54 recommendations to the FAA for improving TFRs, most of which are sensible. AOPA has also been fighting for Class B downgrades for some time now. Both efforts deserve our support, although progress has been predictably slow.

I’m sure European pilots are currently rolling their eyes at this “problem.” These complaints would be a dream scenario in most other countries. But while America still has some of the freest airspace in the world, that hardly means it’s guaranteed – it will only stay that way with serious effort. Most importantly, in the absence of convincing evidence that airspace restrictions have improved safety or security, the default status of airspace should be open.

The good news is that, in a time when almost everything is political, this issue really shouldn’t be. Airspace restrictions have increased under both Democrats and Republicans; mistakes have been made by Congress, the executive branch, and the bureaucracy alike. No party or politician need take special blame here, and no new taxes need to be imposed to fix the problem. We just need to put our airspace on a diet.