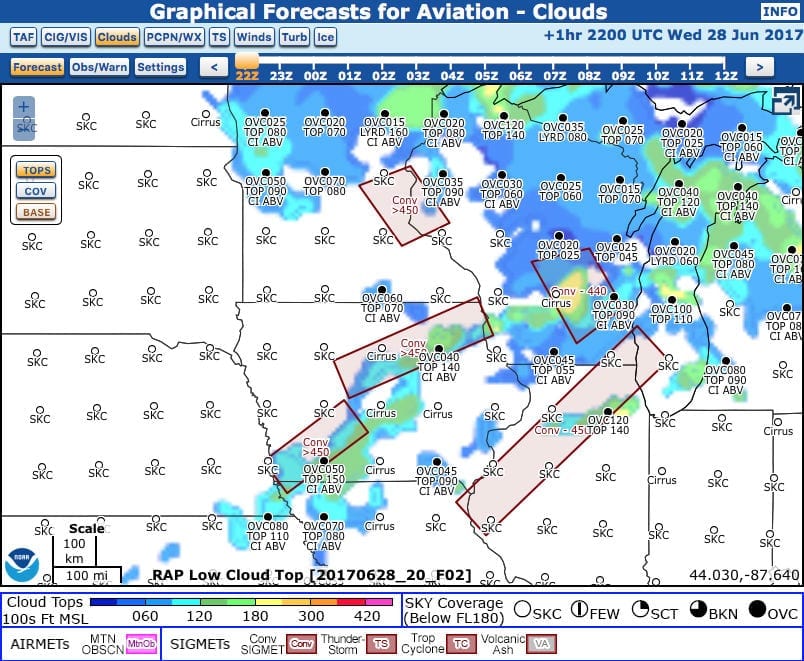 Rumors have swirled for years, but now it’s really happening: the text-based Area Forecast (FA) will officially disappear on October 10, 2017, to be replaced by the Graphical Forecast for Aviation (GFA). On the surface, this seems like an inevitable step in the transition from coded text products to graphical, interactive weather maps. But before we relegate the FA to the dustbin of history, we should consider a few important details. This transition may not be quite so innocuous.

The Area Forecast isn’t pretty, but those cloud top forecasts will be missed.

The FAA is right about one thing: there’s a lot to dislike about the FA. With six huge forecast areas for the US and only three updates per day, it lacks precision. It’s also difficult to read, with dozens of obscure contractions, all capital letters and significant limitations on the number of characters that can be used. It is a weather product made for the teletype era, not the internet era.

These limitations have been clear for decades, and the decision to replace it was hardly made overnight. Scott Dennstaedt, a former National Weather Service meteorologist, points out that the FA-to-GFA transition has actually been going on for close to 15 years (Canada has had a GFA for many years).

In the US, the modernization push started with AIRMETs. By eliminating forecaster lingo (like the once-popular “ICIP”), the text for AIRMETs was standardized and a new graphical AIRMET map – the G-AIRMET – was born. This product is now operational, and will be coming soon to ADS-B broadcasts and probably SiriusXM data plans too.

It’s a major improvement for pilots in both accuracy and ease of use. The old AIRMETs were “time smeared,” trying to account for potential weather conditions over a 6 to 12-hour outlook period by averaging conditions over that time. This led to wildly pessimistic reports and earned the nickname “ScareMETs.” The modern G-AIRMET is issued for smaller areas and at 3-hour intervals – with conditions valid at that issue time instead of the entire forecast period. This practically eliminates the time smear issue and makes it far easier to interpret. You might find yourself actually looking at AIRMETs again.

The AIRMET upgrade seems like a perfect test case for the text-to-graphical transition: a confusing, dated forecast was replaced by a modern, easy-to-read chart. Copy and paste for the GFA, right?

There’s just one problem: the new GFA is not a reliable replacement for the FA yet.

While there are many nice features on the new website, the cloud tops report is a major step backwards compared to the FA. Compare this layer to a satellite image or PIREPs (or the FA) and you’ll find a huge difference. While the GFA map might show “TOP 080,” the actual cloud tops might be above 25,000 feet. That’s a major problem for a Cirrus pilot trying to escape ice, and there are no other widely available options for finding cloud top forecasts.

Why the discrepancy between the old and new forecasts? The GFA’s cloud top forecast is derived from a computer model (the Rapid Refresh or RAP), and it’s almost 100% automated. This model is fairly accurate with stratiform clouds, but it’s not good at all for deep, moist convection like you find around thunderstorms or fronts. The old FA, in contrast, had lots of human input to improve accuracy.

The FAA’s own Aviation Weather Services publication explains the problem: “NWP [numerical weather prediction] models are much more accurate forecasting winds aloft than they are forecasting cloud tops. Pilots should not expect an equally high degree of accuracy with these forecasts, especially in areas where there is a high degree of variability in the forecast cloud top heights.”

Those sentences calls into question why the FAA is making this transition – if pilots can’t trust the cloud tops report, why is it the new standard? Increased efficiency and reduced costs are the most likely explanations, but those will certainly appeal to policymakers much more than pilots.

We need to make clear that the current GFA is not meeting general aviation pilots’ needs. The National Weather Service has a roadmap of upgrades to the GFA, so with some pressure the accuracy of the cloud top forecast might improve over time. At this point, the best option would be to introduce some human forecasting skills back into the equation.

There is some precedent for this. The Collaborative Convective Forecast Product went from human-only to automated and then to automated with a way for humans to amend it. Now it’s back to being a predominantly human-created product, and it has become an excellent tool for planning during thunderstorm season. Perhaps the forecasters’ time saved by the elimination of the FA could be applied to improving the GFA.

In the meantime, pilots should be very careful with the GFA tool. In particular, consider what products are observations and which are forecasts – back up a forecast with a look at current conditions. A new cloud top product is also coming to ADS-B, but it’s based on the Rapid Refresh as well, so skepticism is in order both during pre-flight planning and in the cockpit.

The National Weather Service proudly says, “Aviation weather users have found that pictures are worth a thousand contractions.” That’s absolutely true, but only if those pretty pictures are accurate. For cloud tops, at least, they aren’t.