Blog - Latest News
You are here: Home1 / Article Archive2 / I was there3 / Intentionally crashing a Boeing – what did we learn? 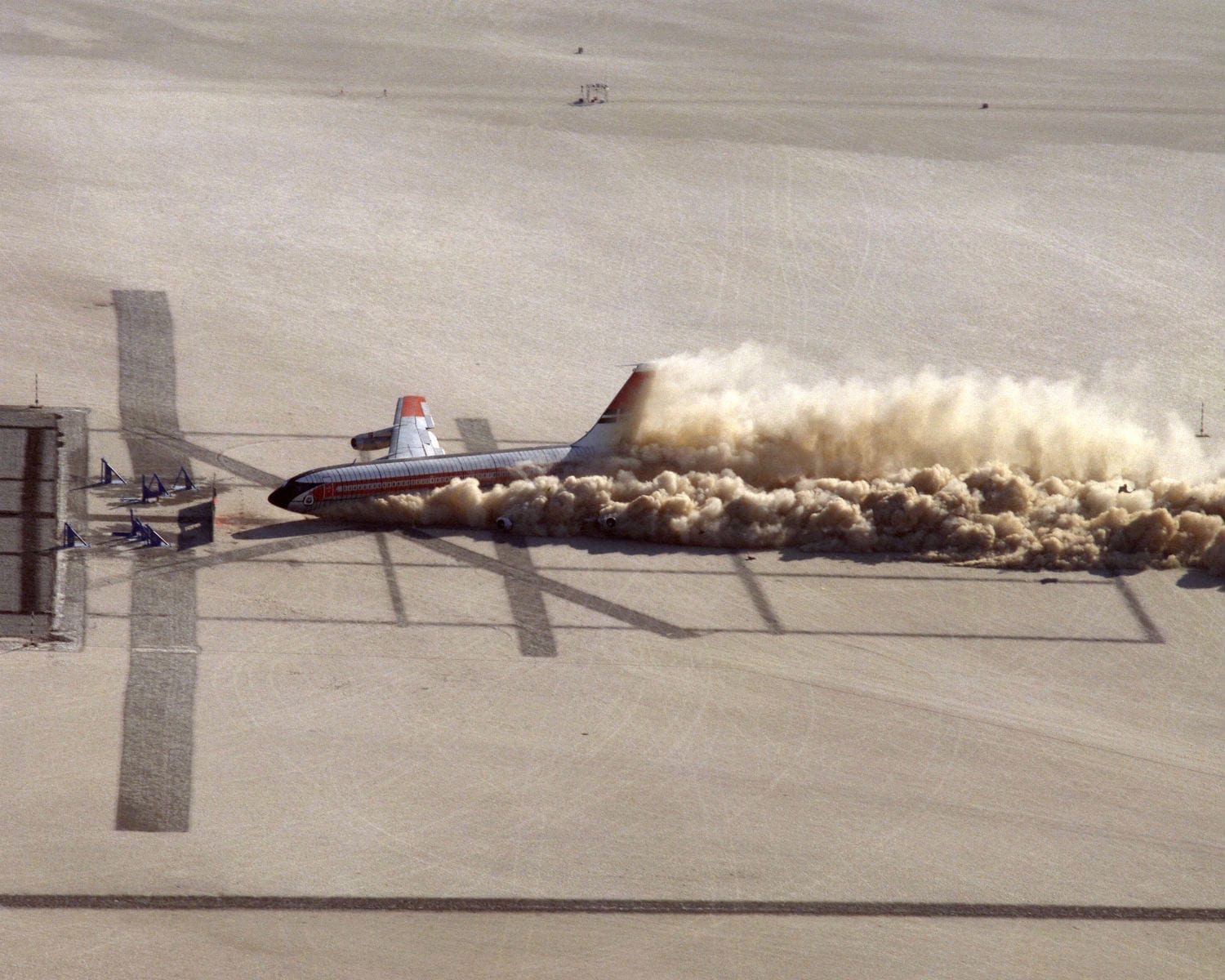 On December 1, 1984 a remotely piloted Boeing 720, loaded with specially formulated anti-misting Jet A, was intentionally crashed at Edwards Air Force Base to determine if the fuel would preclude or suppress a post crash fire long enough for occupants to escape. It was a bold but ill-conceived experiment that went up in smoke.

In addition to the anti-misting kerosene (AMK) evaluation, the controlled crash also provided data on how passenger seats and other structures performed in such situations. Instrumented dummies were seated in the cabin to assess acceleration forces and cameras documented fire propagation and how well other fixtures held up. The experiment was well planned and carefully rehearsed over four years under the careful supervision of Fire Watch Guards. The experiment included multiple remotely-piloted approaches to 150 feet above the ground, 16 of which included engines running on anti-misting kerosene.

Engines had to be modified with degraders to chop up the AMK’s long molecules so fuel would flow reliably into combustion chambers and burn like regular Jet A. Proving flights were a cautious, step by step process, incrementally feeding the AMK from a few tanks to a few engines to be sure engines ran properly.

Airlines were deeply skeptical about the whole idea and very concerned about its costs and practicality. Going forward with such a program meant, at the very least, adding more steps to fuel refining and costly fleet-wide fuel system retrofitting to accommodate the AMK’s long fuel molecules. All of this to address those extremely rare events where suppressing or delaying a post crash fire would allow passengers to escape in an otherwise survivable accident.

The industry view was that the money could be better spent on accident prevention rather than adding costly mechanical complexity to prevent what might possibly happen in rare post crash events. Instead airlines advocated better automation, cockpit displays and warning systems as a better use for the money. More on this later.

NASA worked diligently on the project, methodically fixing remote control bugs and refining control techniques to where they were confident the old Boeing could be flown wings level into eight fixed barriers designed to slice open fuel tanks but leave the fuselage intact.

Finally, with all details complete, the crash date was set. Word went out to the airlines, manufacturers and other interested industry groups to come see the fruits of NASA’s efforts. And so, representing Pan Am, I gathered with others at Edwards Air Force Base on that cool December morning several miles from the Rogers Dry Lake runway where NASA ’s remotely controlled Boeing 720 loaded with 76,000 pounds of anti-misting kerosene would end its last flight.

The plane lifted off, retracted its landing gear, climbed to 2300 feet then banked around and lined up to land wheels up on the spiked runway. We watched through binoculars as the 720 began its descent on a slightly steeper than normal 3.8 degree descent toward the runway. Standing beside me was Alex Ogston, an old timer British chemical engineer who worked for Standard Oil in World War II helping develop the 100 octane gasoline that contributed to the Spitfire’s success in besting the Germans in the Battle of Britain.

As we waited there, Ogston chatted about those long ago times and related how Messerschmitt 109s had to make do with 87 octane gas while the Brits’ 100 octane fuel allowed higher manifold pressure and more power for their Merlin engines, giving them a narrow edge over their adversaries. Ogston was incredulous about what he said was “NASA’s silly effort to keep jet fuel from burning.” I just nodded and said: “Well, we’ll know shortly.”

Nearing touchdown we noticed the Boeing bank left and right then strike the ground slightly left wing down. From our distant vantage point we couldn’t see precisely what followed other than almost immediately a monstrous fireball erupted as the plane slid along. The old engineer standing beside me was right. Liberating tons of jet fuel in the presence of an ignition source will result in a large fire ball. Fire fighting vehicles arriving on the scene were no match for the conflagration and the plane burned over an hour in spite of their efforts.

The 720’s wing wobbling dutch roll (common in swept wing aircraft) was at the root of the pilot’s control problems. Seeing that a wings level touchdown was doubtful, the remote pilot spooled up the engines apparently trying to go around but couldn’t complete the maneuver in time. The plane struck the ground left wing down in a left skid at full thrust instead of being at idle for landing. It then slid into the barriers, one of which sliced through the number 3 engine and passenger cabin, providing a flame path into the fuselage. The botched experiment highlighted the fallacy of carefully engineering a crash scenario to serve as the basis for retooling airliner fuel systems and reformulating jet fuel specifications.

The fireball and post crash analysis dramatically confirmed industry skepticism about AMK, and pointed up its shortcomings as a viable safety enhancement in the real world. The effort was abandoned. But it wasn’t all for naught. Analysis of fire propagation in the cabin led to new standards for fire blocking materials in passenger seats and highlighted the need for faster flight recorder data sampling rates.

The FAA estimated that 25 to 28 of the cabin’s 113 occupants might have been able to exit the cabin before dense black smoke completely obscured visibility. Escape time varied from five seconds in the forward cabin to 20 seconds further back. I’m skeptical of the FAA’s survivability estimates in such a fiery accident scenario because passengers often wear clothing and footwear providing almost no bodily protection and some seem only marginally able to maneuver into and out of seats even in normal circumstances.

Enhanced ground prox systems were first installed in air carrier jets in 1997 and are now in over 55,000 airliners, corporate jets, turboprops, helicopters, business aircraft and military transport aircraft around the world. FARs mandate them for passenger airplanes operating under FAR Part 121, turbine powered planes operating under Part 135 with 10 or more passenger seats and Part 91 turbine powered planes with six or more passenger seats. TAWS installations can include a worldwide terrain and obstruction database and cover all airports with paved runways 2200 feet and longer, although some systems are less inclusive depending on user needs.

These warnings did more for safety than the fanciest fuel projects.

TAWS warns pilots of terrain and obstructions with visual and audio alerts plus, on Part 121 and Part 135 aircraft, color-coded situational awareness terrain displays. TAWS also warns of flight dangerously close to terrain, excessive bank angle, excessive deviations from the ILS glideslope or excessive deviations from the approach descent path – as well as descents after takeoff. Since EGPWS was introduced 20 years ago, the airline hull loss rate for Western built airliners has decreased about 2.5 times.

What TAWS can’t do is convince overly headstrong pilots to heed warnings.

For example, on May 9, 2012, a brand new SU95-100 equipped with TAWS flew into a mountainside during a demonstration flight in IMC while the pilot in command listened to “terrain” warnings and finally, “pull-up” warnings for 36 seconds before impact.

To better understand where and under what circumstances significant airliner flightpath deviations occur, Honeywell analyzed five years of escape activations (2011 through 2015) on glass cockpit airliners equipped with their TAWS. There were 224 final approach premature descent events extracted from about 24.38 million flight legs operated around the world. None were reported by pilots and air traffic controllers. The event data covered the period 20 seconds before the alert through 10 seconds after and were de-identified so that they only could be used for safety analysis.

How many of these premature descents would have ended in an undershoot accident is impossible to know but it’s comforting to know TAWS is doing its job around the world by alerting pilots in a manner that results in a successful avoidance maneuver. And because thoughtful regulators acknowledged the impracticality of AMK as a safety enhancer, we’re not saddled with an unnecessary, unworkable fuel additive which would neither prevent accidents nor materially increase post-accident survivability. It’s the little things that get you