Blog - Latest News
You are here: Home1 / Article Archive2 / Opinion3 / Aviation’s next generation – be the spark

Were you an airport kid? You know the type – standing at the airport fence or hanging out at the FBO trying to do anything to be near those fabulous machines and maybe even one day get a ride in one. I wasn’t a typical airport kid because I lived on a rural farm and not very close to any airports. However, my earliest memories are of wanting airplanes for every birthday and Christmas and then being slightly (sometimes not so slightly) upset because they were models and did not really fly. Had I lived near an airport and been able to find a pilot to tag along with, I’m pretty sure I would have spent my entire teenage years trying to live in a hangar as much as possible.

In reality, I came later than most to actual aviation after having made some feeble attempts to earn my certificate in my twenties and coming to the soul-crushing reality that my financial situation did not quite equal my aspirations of flying. I never gave up and later in life earned that certificate and a glider rating to go with it thanks to some top-notch instructors and flying friends I was lucky enough to have as a part of my life. (Thanks, guys. You know who you are.) Maybe because it was such a long path to my dream I have a sincere desire to pass on my dream to the next generation of airport kids and those who maybe don’t even realize yet they are an airport kid.

Nothing beats sharing the joy of flying with others.

My absolute favorite flight activity is sharing flying with others – it trumps all other types of flying for me. There is just something special about seeing someone’s face when the wheels leave the runway for the very first time in their life. I think we have lost some of the early joys of flying in today’s high tech aircraft and rush to fly more and more complex aircraft or move to the fastest, slickest aircraft money can buy.

I also think we have lost some stick-and-rudder skills as a group, but that is a different article. There is a lot to be said for cruising around locally at sunset with your spouse or taking an excited youngster for a few trips around the pattern in a fun little 150. Or spending the afternoon cruising around slowly in a powered glider chasing puffy clouds for thermals.

These days let you concentrate on improving your foundational skills – maybe actually using that rudder a little and neatening up that pattern. These are also the perfect days to look around for that airport kid in your neighborhood or at the local airport and make his or her day by offering them some time exploring your plane or taking a short hop. It won’t cost you anything but some time and kindness and most of their parents would be thrilled to let them have the experience.

I recently took my 22 month-old Grandson Jake to the airport for the first time (with Mom’s permission of course) and had the greatest day. He might have inherited his Pappy’s love for airplanes as he was excited and clapping as soon as the hangar door slid open and he saw the shiny plane. He immediately climbed up the strut of the 150 and into the passenger seat and shut the door and gave me the “Let’s go” look. I have to admit – I really want him to be an airport kid too because I can’t think of anything that would make my flying more enjoyable than having Jake as a co-pilot.

So instead of pushing it on him, I just try to provide great experiences when he is there. When he is in the airplane, we spend time learning new words like “wing” and “altimeter” – ok that one may be too advanced for this trip at 22 months, but he is a quick learner. We also spend time learning which knobs it is ok to push and pull. He is a typical little boy and enjoys trying to drive anything.

It’s never too early to teach a healthy respect for the preflight.

On this particular day, we pulled the plane out and fired it up for the first time after we strapped in. The noise did not scare him so I gave him the thumbs up and he responded by giving me five and a repeat of the “Let’s go” look. As we taxied out, he was grinning from ear to ear. Little steps and positive experiences and he will be my flying pal for years to come. We taxied back and then walked next door to check out the Super Ximango powered glider – he was just as excited about it and had to touch every dial and knob and make oohs and ahhs as he looked at the wings. He even had time to enjoy his first $100 hamburger and has now claimed the nickname ‘”Buzz” from his Mom and the rest of the family. Yep, he is definitely a natural airport kid!

So remember, it doesn’t matter if you are a local flier in a small tailwheel or a captain with an airline. Take a Saturday and invite a future aviator to come and fly or even hold the soap bucket while you wash your airplane – they will remember that Saturday forever and might even hold onto the dream and become a member of aviation’s next generation.

Thanks to organizations like EAA and its Young Eagles programs, along with many more such as Civil Air Patrol and its orientation rides, a lot of airport kids are getting a chance to see what this flying thing is all about. But don’t feel left out if you are not a member of such an organization – you can still share the wonder of flight in your area. And if you want to spend time with a lot of like-minded pilots and aviation enthusiasts, go check out your local chapter of one of the many great organizations out there. The more great members they have, the more they can share flying and help to improve our community.

Some final thoughts on sharing aviation. Remember – you want the person you are sharing flying with to remember it fondly so restrain from showing all the cool things you learned for checkrides such as power-on stalls and 45 degree banks. Just take them out on a calm day and make it so smooth and event-free they think you are the greatest pilot in the world. They may later really enjoy loops and rolls, but the worst thing you can do, especially with a future airport kid, is return them to the hangar with fingernail marks in your dash and them sick and begging to never fly again. The best, most enjoyable flights are when it looks like you aren’t even trying and that kind of flight is guaranteed to hook almost anybody! 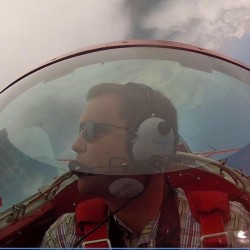 Patrick Irvin
Patrick Irvin, who earned his certificate later in life, is a Senior Analyst at a media company. Patrick is an avid member of several aviation organizations including AOPA, EAA, Civil Air Patrol, and Soaring Society of America. Patrick also serves on the airport authority board of his local airport. After having his certificate for a few years, Patrick obtained his glider license and now flies as a volunteer for the local Sheriff's Dept. in a Ximango AMT200S. He also volunteers for the local Civil Air Patrol Squadron. Patrick's favorite flying activity is sharing the joy of flight with the community.

It’s the little things that get you
Scroll to top