Blog - Latest News
You are here: Home1 / Article Archive2 / I was there3 / A long cross country (and a thunderstorm) teach some valuable lessons

New pilots: do you want to know how to learn a lot about flying in a short period of time? Plan a long cross country flight… I mean, a really long one. When I decided to fly my “new” ’63 Cherokee 180 most of the way across the U.S. to my summer vacation destination, at first I didn’t realize how valuable the lessons learned along the way would be. I would learn how to plan my flight segments to match my fuel range, how to cope with strange new airports, how to work with “flight following,” how to traverse unfamiliar Class B and C airspace, and how insignificant you and your airplane are when faced with towering cumulonimbus.

When I announced to my girlfriend and the kids that I was going to fly myself from Phoenix to Detroit for our summer vacation, I asked who wanted to tag along. I couldn’t imagine anyone would turn down such an opportunity for adventure, so I anticipated I’d have difficult decisions: who would accompany me and who would have to endure the long security lines at the airport and a boring commercial flight? Well, contrary to my expectations, they all opted to fly the airlines. “That’s ok, I’ll have a great time by myself,” I thought, unable to understand how they would make such a choice. In hindsight, though, it was better that I did this adventure on my own. I had a lot to learn… lessons better learned on my own, without distractions.

As a newcomer to the ForeFlight EFB (Electronic Flight Bag) on my iPad, planning a trip across much of the U.S. meant total immersion in the software and the inevitable acquisition of a Stratus GPS/ADS-B receiver. Having learned to fly in the mid-80s, but having only recently returned to the hobby, the cockpit electronics scenario was all new to me. It seemed almost like cheating – no more paper maps to wrestle, and now I knew precisely where I was on the map, I had automatic distance, speed and fuel burn calculations, onboard weather, and many other features which made my job easier and, frankly, more enjoyable.

I was particularly excited about the onboard weather, which is a feature available if you have ADS-B data capability. The weather picture overlaid on my electronic chart gave me a sense of courage I’d never previously experienced as a VFR pilot. Now when I saw weather ahead, I’d have a far better picture of what I was up against. This was nice, because I’d always been ultra-conservative about weather and had often not pressed on in situations where it truly would have been safe to do so.

Early on an Arizona summer morning, after much preparation, a little nervousness, and a lot of anticipation, I eased the throttle forward and embarked upon my first “real” cross country. As the Southwest desert began to heat up during my eastbound cruise at 7,500 feet, I bumped up against some growing summer storms across New Mexico – typical for us in the Southwest (I’d seen them many times). Center pointed out the weather to me and recommended I make some minor course changes to avoid the young and growing thunder cells. The radar picture displayed on my iPad agreed with what I was seeing out in front of me – I was enjoying having such a source of weather information.

The views are spectacular, as long as you give those dark clouds a wide berth.

Hours later, I used my new onboard weather to circumnavigate a massive 100 mile line of thunder cells hovering near Kansas City. Climbing to 11,500 feet, eking about as much altitude out of the Cherokee 180 as I could, I got up close to some towering clouds. No turbulence, no issues, just some breathtaking scenery and some great videos on my phone to prove it. It was a beautiful sight. I was getting comfortable flying close to, but staying clear of, some serious weather. This onboard weather stuff was really paying off!

A while later, compared to what I’d already been through, I came upon what looked like benign rainstorms. “These look easy! No way are these anywhere close to being as powerful as what I saw a while ago… it’ll be easy to slip through that wide gap right there in front of me… there’s got to be about 5-7 miles in between those cells, so I’ll be at least a couple miles from each of them.”

Never could a pilot be so wrong as I was, the moment I decided to fly in between those two cells. About halfway through, it felt as if my trusty Cherokee had become a paper airplane, and the weather gods decided to give me a toss downwards. My head hit the headliner a couple times while the altimeter began to aggressively and sporadically unwind. It felt as if my already-snug lap belt could not be tight enough. Why hadn’t I installed shoulder harnesses like I’d planned? I had not ever experienced such turbulence. My initial and appropriate response was to reduce power, remain under maneuvering speed (Va), and point the nose towards the best path out of there. What seemed like ten minutes was probably only a couple, but it frightened me terribly.

Once I was able to elude the overwhelming punishment dealt to me, I found the next viable fuel stop and made a beeline for that airport. After a careful inspection, I concluded there was no damage to the airplane. However, there was clearly some bruising to my ego and a newly found sense of humility. Thank goodness my girlfriend or my kids weren’t with me – there’s no doubt that after this experience, they would have thought twice about going flying with me again.

As a software industry veteran, I’ve developed the habit of doing a “post-mortem” to examine my experiences and to look for lessons learned. So, not long after nearly soiling my britches, I sat in silence, and began to contemplate the sequence of events.

What had happened to me? Well, it was pretty obvious that I had developed a level of comfort for threatening weather. Having a live weather picture in front of me gave me a false sense of confidence that I could skim fairly close to towering cumulus and pick my way around the stuff without any consequences. My new technology had given me a degree of courage which I had no business having. I’d begun to lose the healthy fear for such weather that was ingrained in me over the years by CFIs, my father (who is a well-seasoned pilot), and the multitude of aviation articles and accident reports I’d read.

I had allowed this new sense of courage to overrule my respect for weather. I did not expect what looked like a heavy rainstorm to reach out so far from its center, delivering such unstable air and shaking me silly. Remember, I was about two or three miles from the storm. At my level of inexperience, I couldn’t imagine that would have been much of an issue – after all, I had been much closer to a far more ominous storm back near Kansas City. I found out, though, that a thunderstorm can reach out quite a ways from its center.

Sometimes the best place to see storms is from the ground.

Yeah, I read these types of things in the past, but until I got just a little taste of it on my own, I was thinking something along the lines of “that’ll never happen to me.” I even remember thinking that those articles are ultra-conservative, and that I could certainly push the limits a bit and not worry about it. I clearly had the wrong viewpoint in this case.

I finished out my long cross country trip with a new level of respect for weather, and also learned how to cope with a wide range of flight conditions. I became comfortable flying into unknown airspace and airports. I learned how to prepare for various phases of flight on short notice, getting what I needed quickly from my EFB at any point along the way. I became proficient in talking to the helpful ARTCC controllers as they followed me across the U.S.

It’s an exhilarating feeling for a pilot of lesser experience to build confidence flying into situations for which you may not have been fully prepared. If you’ve not had the experience, you’ll find that planning and executing a long cross country through unfamiliar territory will give you the opportunity to integrate a lot of new learning into a fun and exciting trip. So, get out there, plan your trip, and open up the opportunities to learn more! 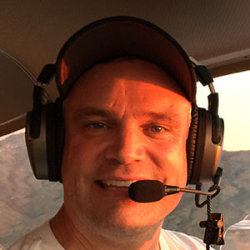